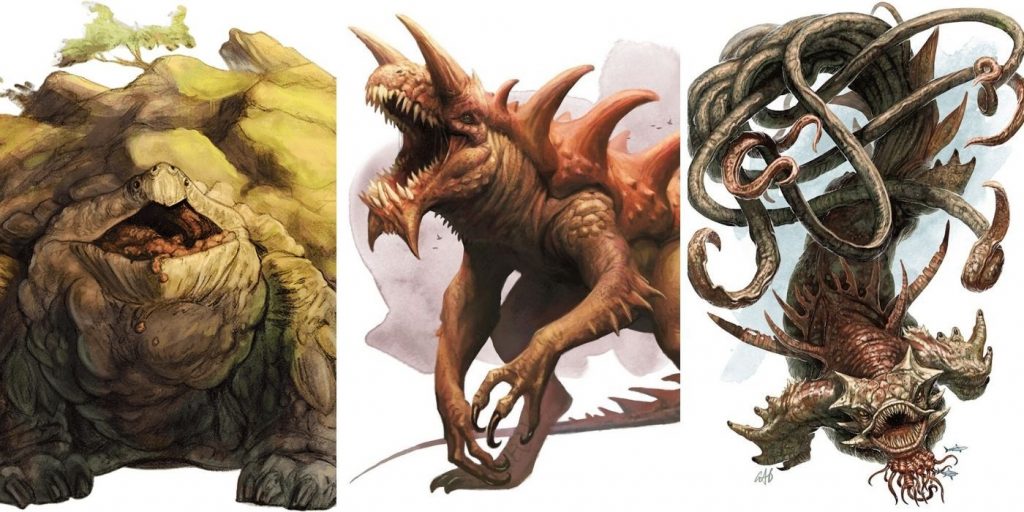 A creature’s challenge rating is the Dungeon Master’s (DM’s) guide to how difficult a particular monster or other enemy will be for their party. The official Dungeons and Dragons rules suggest that, unless the DM is really looking to throw a challenge out there, they should stick to using monsters who have a challenge rating that’s approximately the same as their players’ levels.

While no official rule says that monsters can’t exceed a challenge rating of 30, there are no monsters that do. Since players generally don’t go past level 20, this makes sense (that would be one hell of a challenge!). These monsters from the official Dungeons and Dragons rulebooks are among the toughest to beat in the franchise.

This horrible creature extends to a significant length, since its lower half is actually akin to a snake’s, with scales made of tough armored plates. Its upper body features one huge eye, capable of nullifying magic wherever it’s pointed, and arms with pincers instead of hands. The Astral Dreadnought is named for its homeland, the Astral Plane, which is a plan of existence akin to purgatory — people from the Prime Material Plane reach it through spells, magical devices, or psionic abilities.

One can’t help but imagine a Torterra when looking at the Zaratan. This beast is said to measure hundreds of feet in diameter and live for millennia. However, unlike the Torterra that appears on land (as in the Detective Pikachu movie), the Zaratan lives in the sea.

Unless it’s sufficiently provoked, the Zaratan is passive and does not attack people (even if it notices them); it actually crawls up into its shell, just like one would expect from your average land turtle.

Dragons are, of course, the most iconic enemy in Dungeons and Dragons. The Green Dragon is a chromatic dragon, a type known for being non-reflective and are generally somewhere on the evil side of the alignment chart. The Bronze Dragon, its counterpart, is a Metallic dragon, meaning its scales look akin to metal and usually fall on the good end of the alignment chart. They have a challenge rating of 22. Even though they fall on opposite ends of alignment, both these dragons are aggressive when threatened or challenged.

Liches are a powerful kind of undead magic-user (usually a wizard, but they might also be a cleric or a sorcerer, under the right circumstances). They’re nearly always on the evil end of the alignment chart, but exceptions do exist.

They were once people, like you and me, but embraced undeath so that they could live forever and continue to attain knowledge, a pursuit that consumed their mind until it was an obsession. Liches are significantly more powerful on their own turf: a lich outside its lair only has a challenge rating of 21.

The Blue chromatic dragon and its metallic counterpart, the silver dragon, are slightly higher on the challenge rating scale, at 23. While blue dragons are infamous for the hallucinations they could induce on their enemies, silver dragons actually preferred to live among humans or elves. They would take a humanoid form and often live in the pursuit of knowledge. When in their dragon form, silver dragons preferred to live in snowy mountains. Meanwhile, blue dragons often inhabited arid deserts.

The average D&D player won’t ever have occasion to fight — or even meet — an Empyrean. These creatures are the children of gods from the Upper Planes, who are described as the manifestation of beauty. Empyreans are generally on the good side of the alignment chart. However, they can be corrupted. Occasionally, they might be exposed to the Lower Planes, or be cursed by an evil god; it’s at this point that they are forced to enter the Prime Material Plane, no longer at home among the other gods on the Upper Planes.

Krakens are a common fantasy monster, depicted or mentioned by Pirates of the Caribbean, Moby-Dick, and Clash of the Titans (among many others). They have a huge number of octopus- or squid-like tentacles which crush ships and swallow their crew. In D&D, they’re known as a reality of life on the ocean. It’s even noted that a Kraken could destroy entire island societies and force the surviving humans to be its slaves, feeding, cleaning, and otherwise tending to the beast.

The Red and Gold dragons are the most powerful of the metallic and chromatic dragon types. Red dragons bring to mind depictions of Smaug, from Tolkien’s The Hobbit. They are fire-breathing monsters who hoard treasure with a fury unlike anything seen among mortal men.

RELATED: The 10 Most Expensive Board Games And Tabletop Games You Can Buy Today

Gold dragons may also remind players of Smaug, but only during the scene in the films where he emerges from Thorin’s smoldering lake of liquid gold. These dragons are often described as majestic and are usually lawful good. They also breathe fire but prefer to stay reclusive in stone caverns, deep beneath the earth or in the mountains.

“Constructs” is a term used to denote any creature that’s been created by another through non-natural means, such as animating objects. The Marut, unlike most other constructs, are actually intelligent — they were a type of “inevitables” created by a greater deity named Mystra, who was trying to fulfill her role of guarding all magic. Their alignment is true neutral, so a Marut will only fight in self-defense, to resolve a conflict, or if someone is trying to stop them from fulfilling their duties.

The Tarrasque’s name strikes fear in the heart of almost anyone on the Prime Material Plane. It has the highest challenge rating of any monster in Dungeons and Dragons, and any party will need to perfect their fighting skills in order to take it down. By some accounts, only one Tarrasque exists, and it could be permanently dealt with it someone found a way to lock it away on a different plane. However, not many have been foolish enough to try such a feat.


Next
D&D: 10 Tips For Building A Goliath Character

Gabrielle “Belle” Huston is a writer and long-time gamer based in Ottawa, Canada. She’s played video games for at least as long as she could write, and vice versa, which has led her to work for nerddom sites like The Gamer and the International Geek Girl Pen Pal Club. As a current undergraduate student of journalism, she’s seldom away from her computer. Belle uses what little free time she has to play Battlefront 2 with her partner, work toward that 5-star rating in Animal Crossing, and wonder when the new Dragon Age installment is coming out.