10 Early Game Monsters That Are Worth Investing In 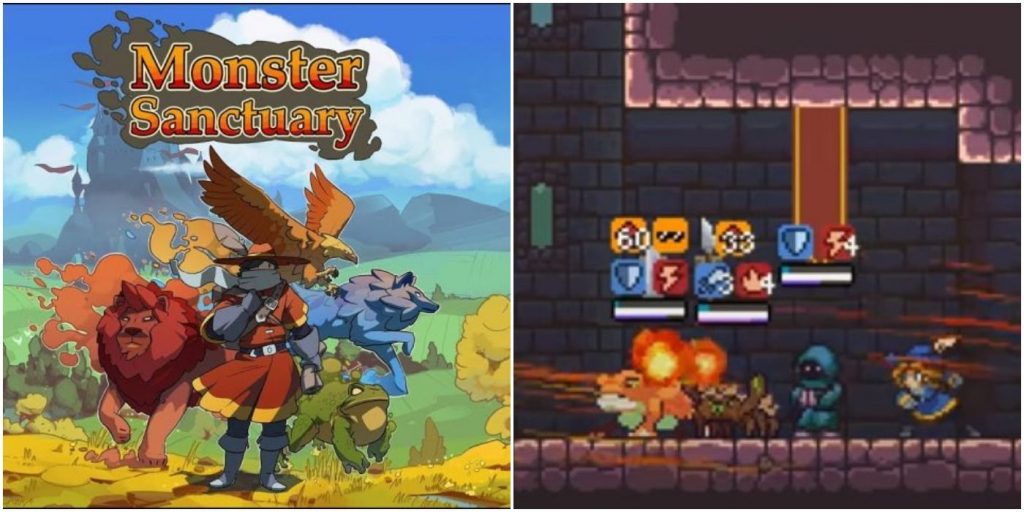 Unlike many other games in the monster taming genre, Monster Sanctuary’s monsters are just as useful at the beginning of the game as they are at the end of the game, largely due to how each monster has its own niche use in battle that doesn’t focus solely on damage dealing.

That being said, there are some monsters that are more useful than others, either due to their buffing or debuffing capabilities or their innate stats being better for their role than other monsters. Some also have use outside of battle and their overworld effects are good at every point in the game.

Updated April 27, 2021 by Callum Archer: With the introduction of New Game+, Casual, and Hardcore modes in Monster Sanctuary, getting a good collection of monsters early in the game is even more important, particularly when Equipment items are carried over into new playthroughs, which helps a great deal in higher difficulties.

Located in the opening area, Mountain Path, this fairly standard looking bird monster is nothing to write home about, but once you get a good look at its skill tree, it’s clear to see why it is one of the best dedicated buffers in the entire game. With the ability to grant the entire team Power, Sorcery, Sidekick, and Barrier at the drop of a hat, it can get the ball rolling in more difficult fights, particularly Keeper Duals, much faster than other monsters. It is also no pushover in battle either, with a decent Attack stat, high Critical Chance, and Critical Damage, it isn’t just a one-trick pony.

Equipment given to Vaero depends on the role it is being used for, but for the most part, increasing its damage output and Critical Chance is a good place to start. With this in mind, equipping them with a Shuriken or Katar are generally good options for this early bird.

Where Vaero excels in buffing the team, Grummy’s strengths are in its ability to inflict debuffs and remove buffs from the opposing monsters. On top of this, it is also one of the better healers and shielders in the game with both Restore and Shield at its disposal. Its best use, however, may be in its evolved form G’rulu, where it gains Fire damage and a considerable boost to its HP and Magic stats at the cost of some Mana. Grummy’s Dark Shifted form also grants it Debuff Mastery, which allows additional stacks of Armor Break, Poison, or Burn that either Grummy or G’rulu can inflict fairly easily. Grummy can be found in both the Blue Caves and Stronghold Dungeon.

Although Grummy can deal out some serious damage and be an all-around pain with its status inflicting moves, the best items to equip them with are ones that increase their defense and magical damage, as it is a monster that player will want to stick around as long as possible. For weapons, the only real option is a Wand, which increases both defense and magic a fair degree.

Vaero and Grummy are both great support monsters, but they need someone to help dish out damage after all their buffing and debuffing. This is where Catzerker comes into play, with great Attack, Critical Chance, and Critical Damage, as well as both single and multi-target attacks that can inflict bleed stacks, it’s a monster that is useful all the way through the game.

Related: 10 Other Metroidvania Games To Play After You Beat Bloodstained Ritual Of The Night

While it is severely lacking in the HP and Defense department, when combined with a decent shielder or its Dark Shifted ability, Assault Shield (which adds a shield based on 25% of a critical hit’s damage), this becomes a non-issue. Like Vaero, Catzerker can be found in the Mountain Path.

Catzerker’s main strength is how easy it is able to land critical hits, so ensuring its equipment makes its job even easier should be the first step for monster tamers. The Katar is the best option in this regard, as it increases Catzerker’s already great attack and Critical Chance to obscene levels.

This elusive monster can be seen fleeing into a hidden area high above what is reachable in the Mountain Path. However, once you have obtained the double jump boots, it is worth making a beeline back here to obtain it as it is the only place in the game where it spawns. Manticorb functions like a Magic-based version of Catzerker, with high damage output and Critical Chance, it can deal a lot of damage very quickly if left unchecked. Its Dark Shifted form also has the Critical Apex ability that boosts its Critical Chance if it uses attacks that hit more frequently, which all of its best attacks do while also inflicting debuffs like Shock, Burn, and Armor Break.

LIke Catzerker, Manticorb’s best assets are its damage output when combined with its high Critical Chance, which makes the Staff weapons the best option for sheer damage output. The Orb is also a decent option if players are worried about Mana Regen, but at higher levels and with the right perks taken, this isn’t much of an issue.

It would seem fair for someone to ignore Fungi entirely, as both its name and its design don’t exactly scream “useful.” However, beneath this toadstool’s cap lies one of the deadliest debuffers in the game. Although it is something of a one-trick pony with its sole use being around inflicting Poison, it can do this better than many late-game monsters like Arachlich or Thornish. While it is very good at inflicting Poison, it has a distinct lack of any other tricks that make it weaker than the likes of Arachlich, but it is well worth using until you can obtain one of those instead and can be found in the Blue Caves alongside Grummy.

Like Grummy, Fungi is a great support monster that players will want to stick around for as long as possible and should ensure that its equipment allows it to do this. The Wand and the Morning Star are both good for this, granting Fungi a decent increase in both Defense and either attack or magic depending on which route players want to take.

Of all the debuffs in the game, Chill may be the most useful due to its ability to halt Mana regeneration for the opposition, preventing them from using their more powerful attacks. When it comes to inflicting this debuff, Frosty may not be the best, but it is definitely a good early game option. Found in the Blue Caves, Frosty is one of the earlier monsters that can be obtained that is capable of inflicting the Chill debuff, though its main use is not in taking advantage of the Congeal ability since it can’t learn it itself. It’s more in using multi-target attacks to stack on the Chill debuff for other monsters.

Frosty may be best utilized for its ability to inflict Chill on just about everything, but that doesn’t mean that it can’t dish out some massive damage when it needs to, particularly when paired with other monsters that utilize Chill. With that in mind, equipping Frosty with weapons like Wands, Orbs, and Staffs go a long way to ensuring players get the most out of their Frosty.

Like Catzerker, Caraglow is a fairly unassuming cat monster that doesn’t seem like it would be overly useful due to the design of the other monsters around the Snowy Peaks where it is found. That being said, it is easily one of the better healers in the game, something that is needed from around the halfway point of Monster Sanctuary.

Related: The 10 Worst Metroidvania Games Of The Decade, Ranked (According To Metacritic)

Not only does it have multiple healing moves with Heal, Restore, Healing Wave, and Revive, it also has a great Critical Chance and Critical Damage stat that allows it to use its sole offensive moves, Claws and Shred, to the best of its abilities.

As Caraglow’s healing moves are all centered around its Health stat, this should be the main focus on increasing when choosing equipment to give them. However, its Critical Chance shouldn’t be ignored either, so weapons like the Shuriken, Staff, or Katar should be chosen when picking a weapon for Caraglow.

Although this monster can be obtained in the Blue Caves, it can be beaten and obtained as a Champion monster in the Mountain Path. While it lacks the debuffing aspect of Manticorb, it does have the same wide movepool, Critical Damage, and Critical Chance at its disposal, allowing it to hit most enemies for increased damage. Monk can also function as a buffer and healer, with access to Heal and Quicken to add the Sidekick and Agility buffs, while also allowing the stacking of Sidekick to deal additional hits and making it a great option for increasing the combo meter before a bigger hit.

Monk’s entire use is in dealing as much damage as fast as possible early in the round, taking advantage of its high Critical Chance and Damage to carve through enemies like butter. Similarly to Manticorb and Catzerker, Monk should take advantage of weapons like the Morning Star or Katar to get the most out of its strengths.

If Frosty is a great choice for inflicting the Chill debuff, Yowie is one of the best for taking advantage of it. Alongside the Congeal passive ability that deals damage to enemies inflicted with Chill, Yowie also has Fatal Upkeep, which increases the damage dealt by Burn, Poison, and Chill debuffs by 20%. This alone makes it a monster that should be held on to should you chose to use one, as damage over time effects are some of the most powerful debuffs in the game and should be taken advantage of. Yowie can be found in the Mountain Path alongside Vaero and Catzerker.

Yowie is one of the few early game monsters that doesn’t need to focus on Critical Chance or damage output, as its main strengths are its high Health and the combination of its Congeal and Fatal Upkeep abilities. Like Grummy and Fungi, players should try to keep Yowie around as long as possible, so Defense increasing weapons like the Morning Star or Cestus should be the first picks when giving one equipment.

It should go without saying, but no matter which Spectral Familiar you begin the game with, you should invest in using them for most of the game. Spectral Wolf and Eagle are particularly devastating when it comes to dealing high damage, while Toad acts like a replacement for Grummy if you would prefer a giant frog instead of whatever the hell Grummy is. Spectral Lion is, for the most part, a decent alternative to Catzerker, with access to Forge and both the Claws and Shred attacks to take full advantage of Bleed stacking.

Each Spectral Familiar has its own strengths and weaknesses, which need to be taken into account when giving them a weapon. While the Wolf and Eagle can take great advantage of weapons like the Katar that improve Critical Chance, the Spectral Toad makes much less use of this and is better off with a weapon like the Morning Star or Wand that increases its Defense instead. The Spectral Lion, unlike its brethren, can wield just about anything relatively well and entirely depends on the skills that the player chooses to focus on when leveling up either starter monster.

Next: 10 Best Games Of The Metroidvania Revival

Callum Archer is a freelance writer based in Perth, Western Australia. He is an avid gamer, Nintendo fanboy, and lover of weird sci-fi novels, who also dabbles in manga from time to time, usually dark and twisted work like Uzumaki and Death Note.