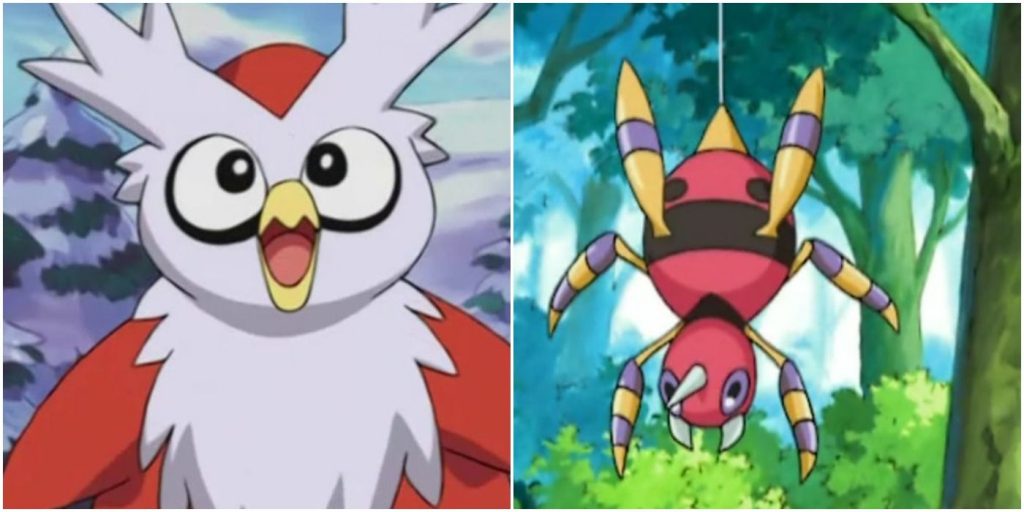 Generation II in Pokemon originally featured 100 species back in 1999 on the Game Boy Color via Pokemon Gold and Pokemon Silver. (Eventually came Pokemon Crystal too!) From Chikorita, Number #152, to Celebi, Number #251, the Johto region was filled with wondrous creatures.

Magcargo, #219, is a Fire- and Rock-type Pokemon that evolves from Slugma at Level 38. This snail is made up of straight-up magma with a shell of stone. Apparently, its internal body temperature goes over 18,000 degrees Farenheit.

Magcargo has access to decent moves and is relatively bulky in terms of Defense. But its HP is trash and so is its Special Defense. Also, Magcargo’s type paring makes it worse actually, as it has a quadruple weakness to both Water and Ground attacks. Finally, it is a slug, so Magcargo is ridiculously slow.

Octillery, #224, is a pure Water-type Pokemon that evolves from Remoraid at Level 25. This red octopus has a hard head and strong enough suction cups to keep it from being blown away. When threatened, or if it feels like it, Octillery will spray ink at enemies.

Delibird, #225, is an Ice- and Flying-type Pokemon. This penguin is red and white with a huge sack. It looks like Santa Claus. Delibird even acts like Santa Claus with its signature move Present.

In battle, however, it is awful. The Speed is bad, and the Defense is worse. Also, the type pairing doomed Delibird from the get-go. Sure, it has access to Spikes and Rapid Spin, but why bother if Delibird cannot even withstand a single move, be it Attack or Special Attack.

Stantler, #234, is a pure Normal-type Pokemon. This deer has the ability to create illusions and legitimately distort reality with its antlers. Stantler are also hunted often due to their antlers, which are valuable, so they are endangered.

They might as well go extinct because in battle this Pokemon does not stand a chance. Normal-type Pokemon need something else, and Stantler does not have that something else (besides Intimidate). There is no bulk, quickness, or power here at all.

Dunsparce, #206, is a pure Normal-type Pokemon. This little serpent looks like an insect and also has tiny wings. In fact, it has the ability to fly (mostly just float though). On top of that, Dunsparce digs and burrows too.

While it has solid HP, all the others stats of Dunsparce suck. Therefore, it cannot even be used as a wall since Dunsparce does best as a passive Pokemon. It will try though with moves like Glare and Roost.

It has a cool type pairing and lots of moves to use, but the stats are just not there. The weakness to Pursuit alone makes it not worth it in battles. And other Psychic-type Pokemon (and Normal-type Pokemon) just outclass it in every way.

Sunflora, #192, is a pure Grass-type Pokemon that evolves from Sunkern when given a Sun Stone. This is a walking, talking, dancing sunflower. In fact, just like flowers, it consumes sunlight for nourishment (and needs lots of water).

RELATED: 10 Pokemon With Types That Make No Sense

Sunflora is happy all the time, except in battles. Thanks to awful Speed and Defense, it will crumble immediately. Not even the ability Chlorophyll saves it.

Sudowoodoo, #185, is a pure Rock-type Pokemon that evolves from Bonsly when gaining a level with the move Mimic. This is a stick that has come alive. Weirdly, though, its hands look like lamps.

Sudowoodoo has Head Smash and Rock, and that is radical, but so do other Pokemon. These ones are also quicker, more powerful, and way tankier than it (and probably have dual-typing). So even though Sudowoodoo also has moves likes Wood Hammer and Sucker Punch, it is not worth it.

Ariados, #168, is a Bug- and Poison-type Pokemon that evolves from Spinarak at Level 22. This spider looks poisonous as heck. In fact, it wraps its prey in thread and drinks the blood via fangs when Ariados feels like it.

Ledian is a Bug- and Flying-type Pokemon that evolves from Ledyba at Level 18. This ladybug is adorable, but also it has boxing gloves. Ledian legitimately sleeps using leaves as blankets and apparently, its glowing powder brings good luck.

Unfortunately, good luck will not save Ledian from how terrible its stats are. The moves it learns (Power-Up Punch, Drain Punch, Ice Punch, Thunder Punch) are fun but Hitmonchan does them better anyway. Seriously, Ledian has such a low base Attack that it will not even scratch an enemy.

NEXT: 7 Recently Discovered Species That Are Named After Pokemon


Next
Red Dead Redemption 2: Badger Locations And All You Need To Know About Them

Matthew D’Onofrio is a writer, but most importantly a gamer, from New York, NY. He likes Pokemon so much that he got Ho-Oh tattooed on his chest. Besides gaming, you will also find him writing sad songs and strumming away on his acoustic guitar.