10 Minecraft Mods That Every Star Trek Fan Has To Try 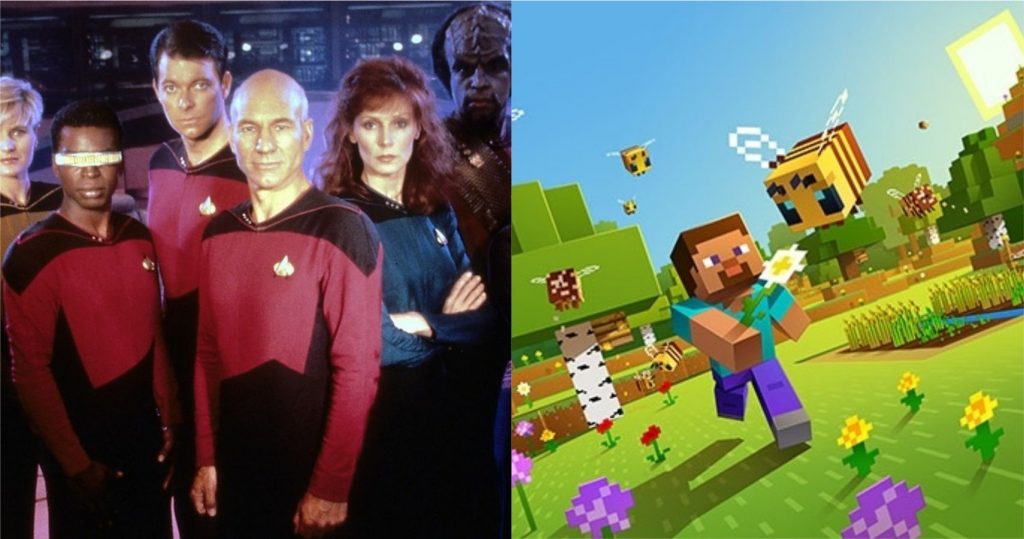 Star Trek is one of the most popular and long-lived science fiction franchises in the world. It focuses on the United Federation of Planets and their myriad exploratory starships that seek out new life and new civilizations and boldly go where no one has gone before. The main ship in the series has always been the USS Enterprise, though there have been others such as the Voyager, the Discovery, and the space station Deep Space Nine.

There have already been several Star Trek video games developed and published in the past, but wouldn’t it be great to feel like you’re in the Star Trek universe while playing Minecraft? That’s where mods come in, and it brings the discussion to today’s topic: Minecraft mods every Star Trek fan should try out.

This first Minecraft mod isn’t a Star Trek-specific alteration, but it is intended to give a science fiction aesthetic to the Minecraft GUI. It doesn’t alter any other aspect of Minecraft, but it gives a subtle visual shift that can allow the player to feel like they’re surviving in a futuristic sci-fi world.

This one has been updated for Minecraft version 1.16 and comes from Planet Minecraft user Defazan. It’s still a work in progress for the developer, but it’s really great.

This is another texture pack that isn’t directly linked to the Star Trek Universe, but it is one that also can transform a player’s Minecraft experience into one of futuristic wonder. The Genesis Texture Pack changes the world into something alien and beautiful. It may not be Star Trek, and it may vary from the overall Star Trek visual aesthetic in some ways. However, it’s still gorgeous, alien, and definitely sci-fi-inspired.

Developer G3N3ZIS recommends using these with shaders, and the mod is updated for version 1.16. It can be found on Planet Minecraft.

This is the last non-Star Trek-specific mod on the list, though it is directly inspired by the science fiction aesthetics of Star Trek and Star Wars by the developer’s own admission. This texture pack changes the appearance of items, blocks, armor, and even the GUI to make Minecraft feel like it takes place in a futuristic space-faring civilization.

This mod was updated for version 1.12.2 and was made by Planet Minecraft user Dr_Songgu_Rayn

This mod allows the player to have an entire Enterprise D in their videogame, with the textures of the blocks used to create the ship altered to make them resemble the surfaces and materials of the Enterprise. For those not in the know, the Enterprise-D was the version of the ship flying in The Next Generation.

This isn’t a vast mod, but it’s one that required hard work and dedication nonetheless. It was created back in 1.1, so how well it will function with later versions of the game is up in the air. It was crafted by Planet Minecraft user Nickv200 and can be found at this link.

This texture pack delivers the Enterprise-A to the player. It only updates the textures for the ship itself, but it still brings a full replica of the USS Enterprise-A, which is the version of the ship that appeared in the Star Trek films, Voyage Home, Final Frontier, and Undiscovered Country.

This is another relatively small-scale texture pack, but it’s still an impressive feat that can be shared with other Minecraft players. Developer VanquishGT last posted that it’s still a work in progress, and that was in 2014. Plus, it was made for version 1.7.10. However, players can still download and build on their Enterprise and enjoy what is there through this link.

This texture pack is inspired by the original Star Trek series, home of Captain Kirk, Mr. Spock, Lieutenant Uhura, and Dr. McCoy. It aims to capture the flashy coloring and relatively simple design that was phased out between the original series and Next Generation.

This one was created by Planet Minecraft user 14jroyer and was made for version 1.2.5 It is almost 10 years old. That said, if you want to check it out, it can be found at this link.

This is another Star Trek-inspired Texture Pack, this time from Planet Minecraft user ChrisRyot. It is a large visual overhaul that is inspired by the Star Trek: Elite Forces videogame. It is mostly complete and is designed to immerse the player into a Minecraft world that looks like a part of the United Federation of Planets.

This one was designed for version 1.8.9, so it is a little dated. Regardless, it can be found at Planet Minecraft.

3 A Touch Of Trek

A Touch of Trek is a large-scale visual overhaul made to resemble the world of the Star Trek Universe and to allow players to build their own versions of various items and ships from Star Trek. It uses the color palette that is already in Minecraft for the retextured surfaces, delivering a true aesthetic melding of Star Trek and Minecraft.

RELATED: Minecraft: Everything You Need To Know About Paintings

This resource pack has been updated for Minecraft 1.16.5 and was developed by Cygnus656. It can be found at this link.

Trek Craft is a more comprehensive mod that builds upon the Touch of Trek resource pack and looks to integrate items, mobs, and weapons inspired by Star Trek into Minecraft. There’s even a Borg Drone enemy! That said, the Curse Forge account that uploaded this, Forge_User_09030964, has marked it abandoned, meaning it won’t be receiving any more support.

Regardless, players can still check out what is already there through this link. The uploader also says that Trek Craft requires this mod library to use.

MineTrek isn’t actually a mod, though it uses several mods to function. MineTrek is a Minecraft server that seeks to integrate the world and civilization of Star Trek into Minecraft. Server users aim to rebuild detailed replicas of the starships and structures from the Star Trek Universe

For more information about joining this server and becoming a part of this Star Trek Minecraft project, check out this link. This page also lists all the mods needed to join the server, many of which require the mod library Minecraft Forge, which the page kindly links to.

NEXT: Minecraft: How To Build Perfect Circle Structures


Next
15 Longest Single Player Campaigns On The Nintendo Switch, Ranked By Length