10 Pokemon Attack Names That Were Better In Japanese 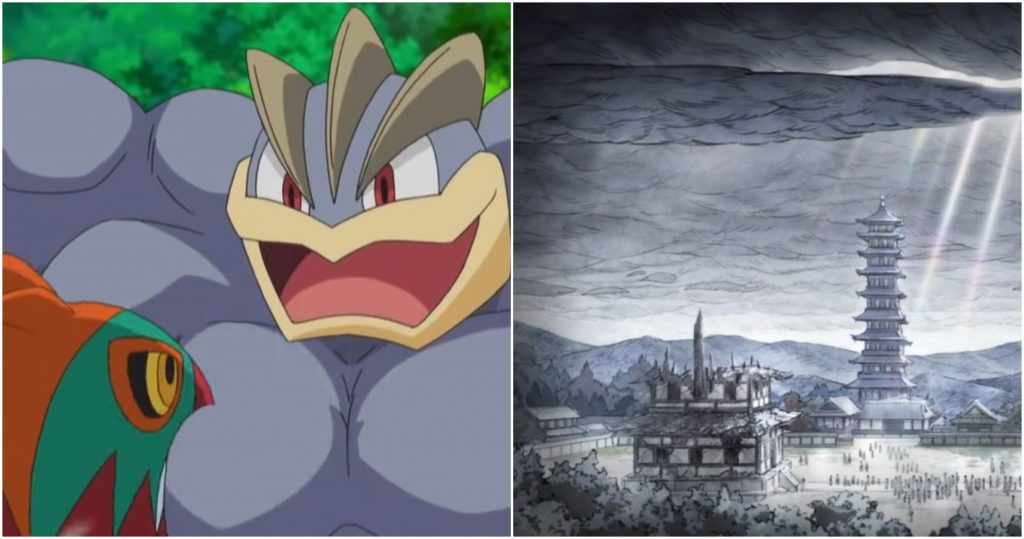 The Pokemon series has now been going for over 25 years — that’s older than a lot of its target market (I know, it hurts). While it has experienced significant popularity fluctuations over the years, Pokemon has never stopped releasing mainline games periodically. With each game promising to be bigger and better than the last, more content is added – more Pokemon, more towns, and of course, more moves.

As one can imagine, after 25 years of adding more and more content, the series is getting a little bloated, with (as of the official count) 898 Pokemon and nearly that many different moves (and that’s just in the games). Some of these attacks boast truly intimidating names like Night Slash and Guillotine … while some are called Baddy Bad. Naturally, there are some attacks that maybe should’ve stuck to their Japanese names.

Okay, this one is just a little funny. Body Slam sounds very dynamic — jumping into the air, ready to absolutely crush whatever poor soul is underneath you. That’s all very well for something dynamic like, say, Hawlucha — but what about our less active friends, like Snorlax?

Well, in Japanese Body Slam is named のしかかり or ‘noshikakari’ which can be translated as ‘weigh on’, ‘lie on’ or ‘lean against’. Now this sounds more Snorlax’s speed — instead of a jumping belly flop, simply leaning against its opponents until they are flat.

Generation VII introduced the world to Z-moves — powered up moves that are triggered by an emotional bond with your Pokemon, fancy jewelry, and a lot of posing — yes, really. Like them or not, it doesn’t matter, because they’re gone now. However, let’s go back to Generation VII briefly…

This one’s pretty fantastic already, but the Japanese name has it beat. Catastropika’s Japanese name is ひっさつのピカチュート or ‘hissatsu no pikachūto’. Pikachūto can be read as Pikachute/Pikachoot whereas ‘hissatsu’ is a reference to a karate term which means, roughly, ‘instant defeat.’ Instakill Pikachoot — wonderful.

Dizzy Punch is synonymous with our favorite dizzy bear, Spinda. With over 1 billion possible spot combinations, Spinda is definitely a unique Pokemon. But, this isn’t about Spinda, this is about Dizzy Punch, and there’s something interesting about it other than its most fitting Pokemon.

Dizzy Punch’s Japanese name is ピヨピヨパンチ which is read ‘piyopiyo panchi’ — ‘piyopiyo’ being an onomatopeiac word for birds chirping (and ‘panchi’ meaning punch). This is a reference to birds circling someone who has been struck on the head — a trope commonly seen in Looney Tunes cartoons.

This ‘return ticket’ phrasing refers to a hand smacking someone and then returning with the back of the hand for a second one, repeatedly — so instead of slapping twice, it’s actually a series of repeated smacks.

Hyper Fang (and the scarier Super Fang) is a move that has been tied to the Rattata line since Generation I. With 80 base damage and a chance to make the opponent flinch, it’s not something that you’d want to be hit with.

Hyper Fang is a pretty good name, admittedly. It does a decent amount of damage and sounds pretty scary, but then we have Japan’s Instakill Fang. Yes, hissatsu is used here too, making the already intimidating Hyper Fang that much scarier. Rattata’s other signature move, Super Fang, is also cooler in Japanese, being named いかりのまえば or ‘ikari no maeba’ which translates to Rage/Fury Fang.

Sweet Kiss and Lovely Kiss are two non-damaging attacks that give status conditions to the target Pokemon — confusion and sleep, respectively. With similar names and effects, it’s not unreasonable to guess that these moves are counterparts, however, this connection is made even stronger when examining the Japanese terms for the attacks.

The name of Sweet Kiss in Japanese is てんしのキッス or ‘tenshi no kissu’, meaning Angel’s Kiss, whereas Lovely Kiss, あくまのキッス or ‘akuma no kissu’ means Demon’s Kiss. One can definitely consider angels and demons counterparts, and in Generations II and III they even had matching angel and demon attack sprites! It’s very much a shame they’ve been changed to generic kiss animations now.

Like several of the attacks on this list, Last Resort definitely doesn’t have a bad name. It does what it says on the tin: an all-out move that pleases fans of cheesy nu-metal and can only be used when every other move at your Pokemon’s disposal has been used.

This all said, the Japanese name makes it just that little bit better with とっておき or ‘totte oki’, which refers to something that has been set aside because of its high value. Or, perhaps, saving the best for last.

Leaf Tornado is a real shame. For something named after a powerful force of nature, one would expect it to do more than 65 damage. This applies for the Japanese name too – グラスミキサー or ‘gurasu mikisaa’ — many may spot that this can be read as ‘grass mixer’.

Grass Mixer doesn’t sound too destructive, really. ‘Mixer’ calls to mind a slow-turning piece of kitchen apparatus involved in making cakes and other delicious baked goods. However, when we factor in that the loanword ‘mixer’ is used to mean ‘blender’ in Japanese, the attack sounds a heck of a lot more violent. Razor-sharp greenery being used to slice you from every angle really deserves more than 65 base power.

Sand Tomb is a little more aptly-named than Leaf Tornado. When thinking of a tomb of sand, it conjures images of something being buried alive. The slow, increasing damage and the lack of escape options fit this macabre name well, as it also does to the Japanese name that is, yet again, just that little bit better (or worse, in this case).

Here’s an interesting one. When we think of a ‘submission,’ most imagine some sort of wrestling hold. So, why then, when Submission is used in the anime, it involves two Pokemon doing some sort of collaborative somersault?

Glad you asked! This attack is named じごくぐるま or ‘jigoku guruma’ in Japanese. Jigoku, as seen with the above entry, means ‘hell’. ‘Guruma’ can be read as wheel and is also used in the name of many Judo throws. In this case, we have Hell Wheel, hence the spinning Pokemon.

NEXT: Pokémon: The Strongest Attacking Move Of Every Type

Jasper is a PS1 enthusiast from the UK, after spending some time in Japan as a teacher, he is now an article writer for TheGamer. When not working, you’ll find him sleeping or trying to speedrun old Crash games.