15 Ways To Make An Overpowered Cleric In Dungeons And Dragons 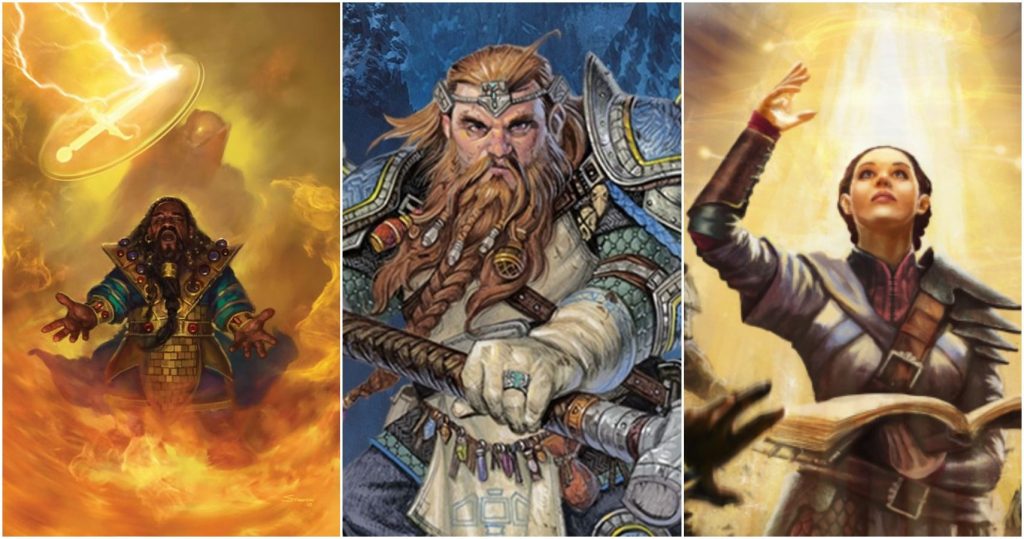 Clerics are the messengers of the divine or if you so choose, the malevolent. Granted powers by deities and charged with spreading their word on the Prime Material Plane, Clerics are a healing and support class.

They can grant buffs to their allies and debuffs to their foes. They can also be stout combatants as well, generally wielding shields and martial weapons such as maces and long swords. They can wear heavier forms of armor so they are quite sturdy so they can survive to protect and heal their teammates. If you’re looking to make the best Cleric possible, here a ten ways to craft one that is certainly overpowered.

RELATED: 10 Ways To Make An Overpowered Rogue In Dungeons and Dragons

Updated on April 30th, 2021, by Paul DiSalvo: Clerics are easily one of the most useful classes in D&D that any part should be happy to have in their company. With the most support-based abilities of any class in the game, Clerics offer a great deal of utility through their spell list that includes incredible divination spells that let a player ask their DM for hints, plenty of healing, and even strong damage output. Thanks to Tasha’s Cauldron of Everything, Clerics have recently gained all the more utility and even more ways to be a great asset to a party.

One race option that can be a perfect choice for a player aiming to make an impressive Cleric is the Aarakocra. Increasing both a character’s dexterity and their wisdom, the primary appeal to playing an Aarakocra is their inherent access to flight.

By playing an Aarakocra cleric, a player is able to easily maneuver around a battlefield and offer their support to any of their allies whilst staying out of harm’s way.

Aasimar are another incredible race that is perfect for playing a cleric. As Clerics are often a party’s designated healer, it’s easy for a cleric to quickly burn through their spell slots using the likes of Cure Wounds and Healing Word in addition to their damaging and utility spells.

Thanks to the Aasimar’s Healing Hands ability, a cleric gains access to the ability to heal an ally once per long rest without expending any spell slots.

A new feat recently included in Tasha’s Cauldron of Everything, Fey Touched provides a character with the ability to cast the Misty Step spell once per Long Rest without using a spell slot. Misty Step is a stellar and flexible teleportation spell that can be cast as a Bonus Action.

It can also allow a character to easily escape restraints or simply get in some additional movement on their turn. As most clerics are normally incapable of learning this spell, this feat can help make an already strong Cleric all the more useful.

Another new Feat from Tasha’s Cauldron of Everything, Metamagic Adept allows non-sorcerer characters to gain access to sorcery points and meta magic.

This feat is any cleric’s dream, as this opens up the option of using the Distant Spell metamagic, doubling the range of one’s spells. This allows a more fragile Cleric to safely keep one’s allies alive and well from afar!

Surprisingly, one of the most useful multiclass options a Cleric can dip into is the fighter. Not only does this allow a cleric to improve their AC by gaining the Defense fighting style, but upon taking a second level of fighter, that character gains access to the action surge ability.

With access to action surge, a Cleric gains the ability to potentially cast two spells on their turn, opening up significant potential when it comes to both support and damage output!

When you create a cleric, you get to choose a domain of power. Your role in the party is to keep your teammates alive with healing and buffs. The Grave Domain is hands down the best subclass for an overpowered cleric. The Grave Domain gives you many necrotic-based spells as you level up.

From level one, you gain the ability to heal people with zero hit points the maximum amount the healing spell allows. You can single out an enemy so the next time they take damage, its doubled. Furthermore, you can cancel critical hits on yourself and allies and at level 17, you can heal yourself and your team when an enemy dies.

9 Golgari Swarm or the Orzhov Syndicate

If a player happens to be playing a campaign set in the world of Ravnica, they gain access to guild-specific backgrounds. Your Grave Domain cleric will gain the most perks from being a part of either the Golgari Swarm or the Orzhov Syndicate. Being a part of the Golgari will give you more necromantic spells but you will end up doubling down on a few.

On the other hand, the Orzhov will give you more spells to help you maintain control over the battlefield.

If material from the Guildmaster’s Guide to Ravnica isn’t available for you to use, your next best bet would be the Human or Half-Elf race. Humans get one extra point to all stats. They don’t gain any other traits but this all-around boost is helpful for shoring up any low numbers you might have rolled.

The other option and possibility, the better one depending on your preference, is the Half-Elf. This race gets a two-point bonus to Charisma (which you’ll need if you are casting control-based spells) and you get to choose the other two stats to increase by one. In addition, you can have many of the benefits granted to elves such as dark vision and fey ancestry.

If you choose a Half-Elf you can take the racial feat Elven Accuracy found in Xanathatr’s Guide to Everything. This feat allows you to add one point to either your Dexterity, Wisdom, Intelligence, or Charisma.

For this build, you’ll obviously want to pick Wisdom. In addition to the welcome stat boost, whenever you can get an advantage on a saving throw in any of the mentioned categories, you can re-roll one of the dice for the chance of getting a higher roll. By choosing a Half-Elf to get this feat, along with being a cleric, you will automatically get an advantage on Wisdom and Charisma throws.

Another feat you’ll want to take when you get the chance is the Healer feat. This feat allows you to use a healer’s kit to not only stabilize a downed ally but get them back on their feet with a single hit point.

Or, if your ally is already up but in need of healing, this feat allows you to use the kit to restore their hit points by a bit. This is a key feat to get as a cleric because while you have healing spells, you only have a limited number of spell slots. If you’re saving your slots or if you’ve run out, having a healer’s kit and this feat gives you a backup plan for emergencies.

5 Ioun Stones of Fortitude and Insight

Ioun Stones are magical gems that float around your head and give you various benefits as long as they are in your possession. They vary in rarity from rare to legendary. The two gems that will benefit your cleric the most are both very rare so they’ll either cost you a bit of money or they could be found as loot in a tough dungeon.

First the Stone of Fortitude. This pink rhomboid will give you a two-point boost to your Constitution. The Stone of Insight is a blue sphere and it will give you two extra points to your Wisdom stat.

This item is a good thing for a cleric to carry around. It not only heals a few hit points but it also removes diseases and poisoning. The spells lesser restoration and greater restoration, as well as a few others, have the power to cure disease and nullify poisons but that requires preparing them for the day and using a spell slot to cast them.

As a cleric, you are the pillar of your party. Any way that you can conserve slots and spells is vital. The best part is this item is not uncommon so it won’t be outlandishly expensive and should be simple to find.

The Talisman of Pure Good is of legendary rarity. This means that you certainly aren’t going to find it in the local shopkeeper’s inventory. If your cleric is going to get this item, it’ll either be a prize for surviving an extremely difficult dungeon, a gift from your diet, or some other extraordinary means.

RELATED: D&D: Everything You Didn’t Know About Tieflings

However, if you can get your hands on it, it will only serve to enhance your abilities. As long as you are good, you’ll get a bonus of two to your spell attacks and when you target an evil creature a large fissure opens beneath them. If they are unable to get out of the way, they fall in and are instantly killed.

Last but not least, is a Ring of Regeneration. This and all of the other magic items on this list are useful to your cleric but they all require you to attune to them. You can only attune to three items at once but considering that the Talisman of Pure Good is legendary, it’ll be a bit before you get it. So this ring, while very rare, is more obtainable.

The ring will regenerate your health every ten minutes and if you happen to lose a limb, it will regrow over the span of a few days. Remember, if you go down, the party has little to no healing so it’s important for you to stay alive.

As of the release of Tasha’s Cauldron of Everything, Clerics now have access to one of the most deceptively broken subclasses in all of D&D: the Peace Domain. While this subclass gains access to an additional healing ability in the form of its Balm of Peace, upon reaching level 6, these clerics allow a party to trivialize combat through their Embolding Bond and Protective Bond abilities.

This is because these abilities allow the cleric to create a bond between the various members of a party, allowing any of these party members to spend their reaction to teleport to any of their other bonded allies and take a hit for them. This allows a party to always be able to choose which of their party members is taking damage and when. On top of a clerics already incredible utility and support, this combination of abilities can get out of hand quite quickly.

If a player isn’t really feeling the Grave Domain subclass, this overpowered option is sure to provide an absurd amount of value for a party.

NEXT: 10 Challenges That Dungeon Masters Face (& How To Overcome Them)