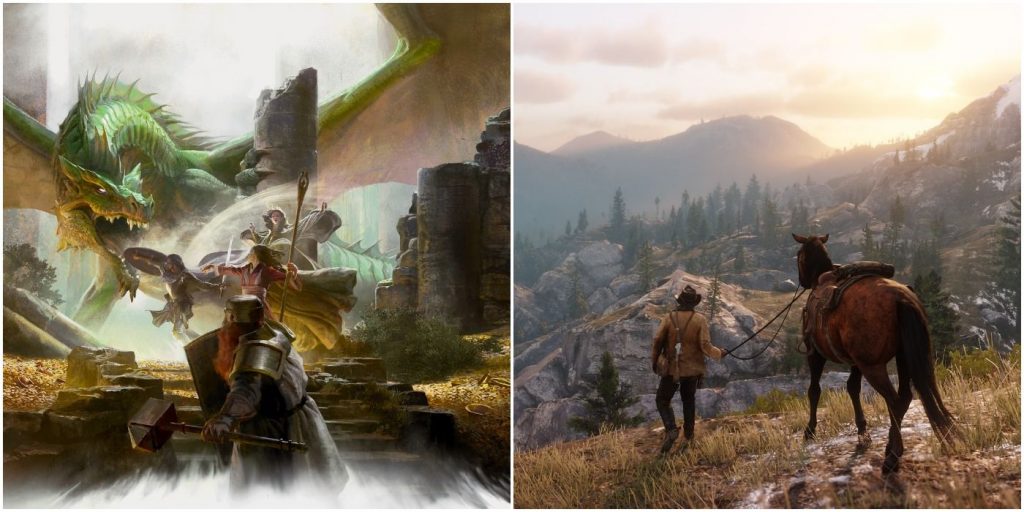 By using well-tested storytelling devices, paying attention to real-world histories, and utilizing handy tools for atmosphere development, writers and players can create immersive Country & Western campaigns, and ride off into the sunset, just like their favorite gunslingers.

Knowing the genre that your campaign is set in, and knowing it well, makes a lot of difference to your D&D campaign. Country & Western is an established genre in itself, so it’s good to remember that as such, especially in other mediums outside of D&D, like film, this means it is incredibly diverse. Country & Western can easily overlap with a host of similar or thematically-adjacent genres, yet it’s the genre’s ability to dramatically combine other, more naturally oppositional genres with itself that makes it such a great opportunity for a D&D campaign theme.

RELATED: 10 Best Ways For Newcomers To Get Into D&D

Think about how many Westerns you’ve watched that cut their dry, wide-open space narratives with a heady shot of Science Fiction. Westworld is probably the more recent (and one of the more successful) of these meldings between Sci-Fi and the Western, but there’s also Firefly, The Dark Tower, Back To The Future III, and of course, Cowboys & Aliens. Consider adding an oppositional genre to your Country & Western, and see your players thrive.

Do The Research and Be Sensitive

If you are looking to create an ‘authentic’ Country & Western theme you may want to rethink what you yourself consider to be ‘authentically Western’. Dr. Esther Wright, a lecturer in Digital History at Cardiff University who has worked extensively on Rockstar games such as Red Dead Redemption and L.A. Noire, reminds us that the history of the Wild West is not what we see in pop culture, and instead was an era of destructive colonization and displacement of Indigenous peoples.

RELATED: Dungeons & Dragons: 10 Things You Need To Know About Character Creation In D&D

The Country & Western theme then is actually closely overlapped with the real-w0rld history of the Wild West. This means that players and writers should try to be sensitive to which tropes are fantasy creations and which are drawn from negative stereotypes and real-world traumas.

Country & Western is a theme that can sustain both one-shot and long-term campaigns in D&D, so when designing, remember to always plan to scale! There is a difference between planning a campaign for two hours of play and designing one for two years, and it can be an awkward situation trying to bridge the gap between the two, especially when you’re unprepared.

RELATED: D&D: 5 Skills Every Beginner Should Be Proficient In (And 5 They Can Ignore)

By planning encounters, fights, or adventures ahead as smaller, interlocking scenes —  instead of one, long, linear narrative — it means that you can adapt your world on the fly to fit your campaign’s length and your players’ interest. Try designing your adventures loosely, rather than putting in too much detail — it doesn’t make much sense to write the back histories of a town full of characters if your party will only be passing through said town for twenty minutes’ game time.

Meeting new characters or assaulting new dungeons is one way to tell a story in D&D, yet the Country & Western genre gives players the opportunity to use a much broader brush by relying on Environmental Storytelling. This process allows story or narrative to be enacted via the space around players — the setting, location details, and/or objects that have been placed there can tell the story, as interpreted by players and their interactions with that space.

Russell Jones, a UK-based game developer of TRPGs, says that Environmental Storytelling can open a myriad of doors for players,

“… Maybe the land is literally new, pulled from the sea by a God or the collision of one plane with another? Such an event is bound to leave all sorts of interesting features that you can use, such as the ancient ruins of an undersea civilization, or unstable rifts to who knows where.”

Jones suggests players question their setting’s environment in order to build this deep storytelling method into their campaigns.

“How long has [the area] been like this? It’s unlikely that towns would remain ramshackle cut off from the world for more than a few generations. Is there a sense of hope that people are building a life or is the place in slow decay?”

Try asking yourself questions such as these when you design your campaign space and consider what the environment could tell your players about your world.

The worlds of the Country & Western genre are filled with colorful character tropes available for GM’s to utilize. Think of the black-hat bad guy, the cowboy gangs, the lone sheriff, saloon bartenders, the gold prospectors, the town drunk, and the mysterious drifters. These trope characters are easily found online, but again, be wary of including any negative Country & Western stereotypes that could upset or offend your players.

Consider including Travelling Salespeople and other ‘repeating’ characters to give your players a sense of familiarity in the wide-open space of the Western. Try starting your campaign with players crossing paths with multiple merchants (each designed to be dynamically different from the others) and then simply pick the character the players respond to best as your repeat encounters.

When you think Country & Western, you’re probably going to be considering including horses in your campaign, perhaps for the first time. The natural animal companion to any Western narrative, horses, and other mounts and transport like wagons, have special stats and accommodations within the D&D rulebooks, and these should be looked at before you rush to include your favorite four-legged friends.

If you are adhering to the D&D 5e rulebooks, a fast riding horse will cost you 75 gold and be able to run at a speed of 60 ft, carrying a weight load of 480 lbs. Draft horses meanwhile, selling at 50 gold, can carry a much larger 540 lbs but can only travel at 40 ft. You can add wagons or carriages to your campaign, but these will sometimes need to be drawn by multiple animals and can be costly. Luckily, the 5e rules provide a nice bonus in that circumstance;

“An animal pulling a carriage, cart, chariot, sled, or wagon can move weight up to five times its base carrying capacity, including the weight of the vehicle. If multiple animals pull the same vehicle, they can add their carrying capacity together.”

Use An Unreliable Narrator

Haris Orkin, writer and script director of Call of Juarez: Gunslinger, suggests writers think about using unreliable narrators when wanting to push player’s curiosity into Western narratives. In Gunslinger, Orkin wrote lead character Silas Greaves as unreliable as both a way to explain away obvious game mechanics as well as to encourage players to question what they were being told about Western history.

“We decided our narrator would be unreliable and that the world would change as the story changed. I thought that perfectly mimicked how the history of the West was written in the first place.”

Unreliable narrators such as Greaves are perfect for when you are trying to create an air of mystery in a campaign, and even better, they can cover a variety of sins on behalf of the DM. “Did I say there were five bandits?” the Gunslinger drawled, “I meant fifty.”

One of the best and simplest ways to improve your D&D campaign’s atmosphere is to add music. In Country & Western campaigns you have a host of choices for a soundtrack. Why not emulate your favorite Spaghetti Westerns and include an Ennio Morricone score? Fill your fictional gunslinger saloon with the stylings of Dolly Parton or Orville Peck. Countless hours of D&D soundtracks are available on both YouTube & Spotify, making including them in your game all the easier.

Another tip is to get a ‘white noise’ app for your phone. Apps such as White Noise+ can be used to curate tailor-made soundscapes on the go — a surefire way to ensure your players are fully immersed in the experience.

Always Be Open To Change

This is less a Country & Western tip and more of an ‘every game of D&D you play’ tip — always, always be open to change. It can be incredibly disappointing to create adventures for players and find out that the path you’ve designed isn’t going to be followed, or that you’ve put effort into characters who are overlooked in favor of ‘throwaway’ characters you spent a minute crafting. But this is a common side effect of the impromptu nature of D&D, and games will quickly go stale if you try and force (or ‘railroad’) your players into your chosen narrative.

Instead, embrace the loose, spontaneous nature that D&D brings, and try to be understanding of your players’ interests. By designing your campaigns openly, to scale, and without unnecessary constrictions, you can make your campaigns not only enjoyable for your players but also yourself.

NEXT: 10 Weapons In D&D That A DM Should Never Give A Party

Emily Marlow is a non-binary writer and researcher based in Sheffield, hell-bent on making his 26-year-long devotion to Neon Genesis Evangelion worth more than just the occasional funny tweet. Holds multiple degrees from the University of Sheffield, including a Master of Biblical Studies, with a focus on Bioshock Infinite. Biases J-Hope.