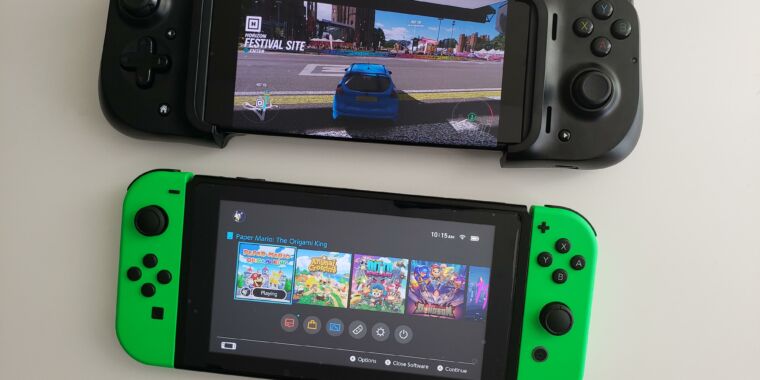 For years now, there have been rumors that Microsoft and Nintendo were planning a major partnership to bring the xCloud game streaming features of Xbox Game Pass to the Nintendo Switch. But now an analyst is citing Nintendo itself as saying that rumored team-up won’t be happening.

Game industry analyst and Astris Advisory Japan founder David Gibson tweeted yesterday that while a Switch/xCloud partnership “would make a lot of sense… I have had Nintendo tell me directly they would not put other streaming services on the Switch.” With Nintendo not offering a comment on the matter to Ars Technica, that kind of secondhand sourcing from an analyst in a position to know might be the best information we get for the time being.

Gibson’s tweet came in response to more speculative tweets from NPD analyst Mat Piscatella explaining why he thought such a partnership would be a good idea. “Nintendo would get a massive content gain and sell millions of incremental Switch, [and] Xbox Cloud would be in front of millions of new potential subscribers,” Piscatella said. In the same tweet, though, Piscatella noted that “none of this means that Xbox Cloud will actually ever make it to Switch… there is a list of reasons why it wouldn’t.” (And no, a Switch in the background of an Xbox livestream probably doesn’t point to any of those reasons in either direction.)

Back in 2019, Game Informer cited unnamed sources in reporting that a “Game Pass on Switch” announcement “could come as soon as this year.” Windows Central’s Jez Corden offered a similar report at the time, saying that he had “been hearing for almost a year that Microsoft was aiming to put Xbox Game Pass on Nintendo Switch and even PlayStation 4.”

That potential collaboration wasn’t as ridiculous as it might have seemed at first glance. It certainly would have fit with Phil Spencer’s December 2018 statement to Gamespot that Game Pass “started on console, it will come to PC, eventually it will come to every device.” XCloud General Manager Catherine Gluckstein followed that statement up in a 2019 interview with Wired, saying that Microsoft had “a vision to bring Project xCloud to every device where people want to play… I wouldn’t rule anything out, I wouldn’t rule anything in at this time.”

On Nintendo’s side, the Switch maker has already partnered with third-party publishers for cloud-based streaming of Resident Evil 7 and Assassin’s Creed Odyssey in Japan and international cloud versions of Hitman 3 and Control on the Switch. These are games that would otherwise be difficult for the underpowered Switch hardware to run natively, a situation that would apply to most of the streaming games on Xbox Game Pass as well.

Former Xbox exclusives like Ori and the Will of the Wisps (originally published by Microsoft Game Studios) and Cuphead have seen native releases on the Switch in recent years, too. And that’s not even mentioning the continued success of Microsoft-owned Minecraft on the Switch.

Alas, for now it seems the connections between Microsoft and Nintendo won’t extend to streaming a copy of Forza Motorsport or Halo on the Switch. In the meantime, at least we can sideload Android onto a hacked Switch and get some unauthorized cloud gaming that way.