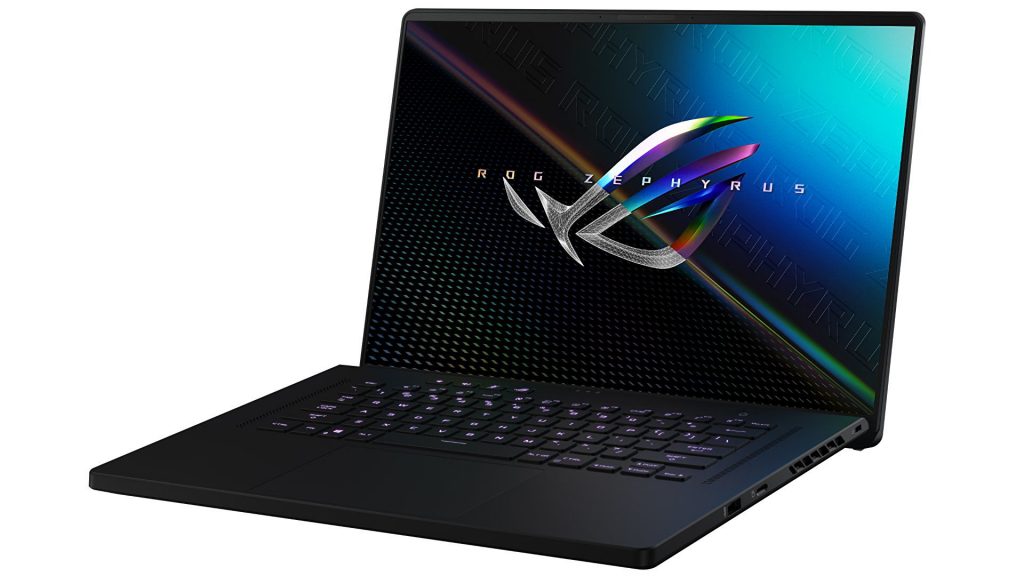 It’s big news in laptop land today, as the launch of Intel’s 11th Gen Tiger Lake H-Series CPUs for laptops and Nvidia’s RTX 3050 and RTX 3050 Ti laptop GPUs has prompted a whole new swathe of gaming laptop announcements. I got to see two of them early in an online demo presentation: the 16in mega screen of the Asus ROG Zephyrus M16 (pictured above), and its large desktop replacement sibling, the Asus ROG Zephryus S17 (pictured above, right). Both look like very fine gaming laptops indeed, but it’s the super narrow bezels on all four sides of the Zephyrus M16’s display that have really caught my eye here. It looks absolutely gorgeous, and I don’t think I’ve seen a more impressive-looking display in all my years of tech journaling.

The pictures don’t really do it justice, but having a laptop screen that extends all the way down to the top edge of the keyboard just looks so freakin’ cool. Normally, laptop screens have a much thicker bezel on their lower edge – as you can still see on the Zephyrus S17 further down – but somehow Asus have managed to squeeze every last millimetre out of the M16’s 16in, 2560×1600 display to give it a 94% screen to body ratio. It’s a world first, and most impressively of all, they’ve still managed to slot in a small webcam, too, so you won’t miss out on those all-important video calls.

It’s a stunning bit of tech, and the quality of the display should be top notch as well, as Asus said it will be Pantone validated to cover a full 100% of the DCI-P3 colour gamut – which is a much wider gamut than the standard sRGB one, and is generally used to measure a display’s HDR chops. The Zephyrus M16 isn’t an HDR display as far as I’m aware, but it means colours should look noticeably more punchy and vibrant in the flesh. It’s bright, too, hitting a peak white level of 500cd/m2. If all that wasn’t enough, the display will also have a tall, 16:10 aspect ratio, much like Asus’ existing ROG Flow X13 laptop, as well as a 165Hz refresh rate and adaptive sync support to help make games look super smooth at high frame rates.

Despite the display’s large, 16in diagonal, though, this is still very much a 15in gaming laptop in terms of size and weight. In fact, it’s actually 5% lighter and smaller than its immediate predecessor, the Asus ROG Zephyrus M15, which I reviewed at the end of last year, measuring just 355×243.5×19.9mm thick and weighing a mere 1.9kg. The rest of its design is very similar to their popular Zephyrus G14 and G15 laptops, too, which you may remember had the fancy LED matrix design on the back of their lids. The Zephyrus M16 has one of these as well, and Asus have added a prismatic film this time round to really make it shimmer.

In terms of hardware, the Zephyrus M16 will come with one of Intel’s new Tiger Lake H-series CPUs, which will be surrounded by liquid metal to help aid cooling, as well as up to an Nvidia RTX 3070 graphics chip to make full use of that high resolution display. It can also accommodate up to 48GB of DDR4 3200MHz RAM and up to 2TB of PCIe Gen 4 SSD storage. It’s got a good range of I/O ports, too, including two USB-C ports with power delivery, one of which will also support Thunderbolt 4, two USB 3.2 Gen 2 Type-A ports, a microSD card reader, an HDMI 2.0b output, a full-sized Ethernet port and a combined 3.5mm headphone and microphone jack. Asus told me it has a soft touch coating around the keyboard, too, to help minimise any messy fingerprints, which always gets a big (hopefully non-greasy) thumbs up from me.

All in all, it’s a really lovely bit of tech. Asus haven’t said how much it’s all going to cost just yet, unfortunately, but I’m looking forward to getting one in for testing as soon as review samples are available.

That’s not to say the Asus ROG Zephyrus S17 isn’t worth looking at as well, of course. This larger 17.3in gaming laptop comes with a number of extra features over the smaller M16, including a proper optical mechanical keyboard (the same one as the excellent Scar 15), space for three PCIe SSDs, a neat little volume wheel, and more powerful hardware, including up to an RTX 3080 that can hit a massive TDP of 140W thanks to Asus’ Dynamic Boost tech, on top of its Intel Tiger Lake CPU.

Unlike previous Zephyrus S laptops, Asus have moved the keyboard and number pad back to their usual position above the (very large) touch pad this time, and the entire keyboard tray rises and lifts up when you open the laptop, giving you a similar typing angle to a desktop keyboard. The palm rest below also has a thicker coating to give it a soft touch rubberised feel to make typing and playing games even more comfortable.

Asus have revamped the keyboard’s multi-wheel in the top corner to make it wider and easier to use, too. It also has acceleration now, so you can make longer, faster scrolls to quickly change the volume, your microphone input, keyboard backlight and more by increments of 10-20%, instead of the usual 2-3% adjustments.

On top of its powerful innards, the Zephyrus S17 will come with two display options: a 2560×1440, 165Hz panel with full Nvidia G-Sync support or a 4K, 120Hz panel with regular adaptive sync. Both will be Pantone validated to cover 100% of the DCI-P3 colour gamut like the M16 above, though, so you won’t have to compromise on image quality depending on which resolution you go for. Its larger chassis also has room for more I/O ports, too, including two USB-C ports with power delivery (one of which also supports Thunderbolt 4), three USB 3.2 Gen 2 Type-A ports, a full-sized SD card reader, an HDMI 2.0b output, a full-sized Ethernet port and a combined 3.5mm headphone and microphone jack.

There are, of course, dozens of other new gaming laptops from other manufacturers launching over the coming weeks and months, and I’ll be seeing some of those in action before launch very soon as well. For now, though, both Asus ROG Zephyrus laptops are definitely ones to watch if you’re on the lookout for a new, slim gaming machine – and the Zephyrus M16 in particular is 100% on the top of my most wanted list as well. Hopefully it won’t be too long before I’m able to test them in person to see whether their gaming performance is as good as their jaw-dropping design.