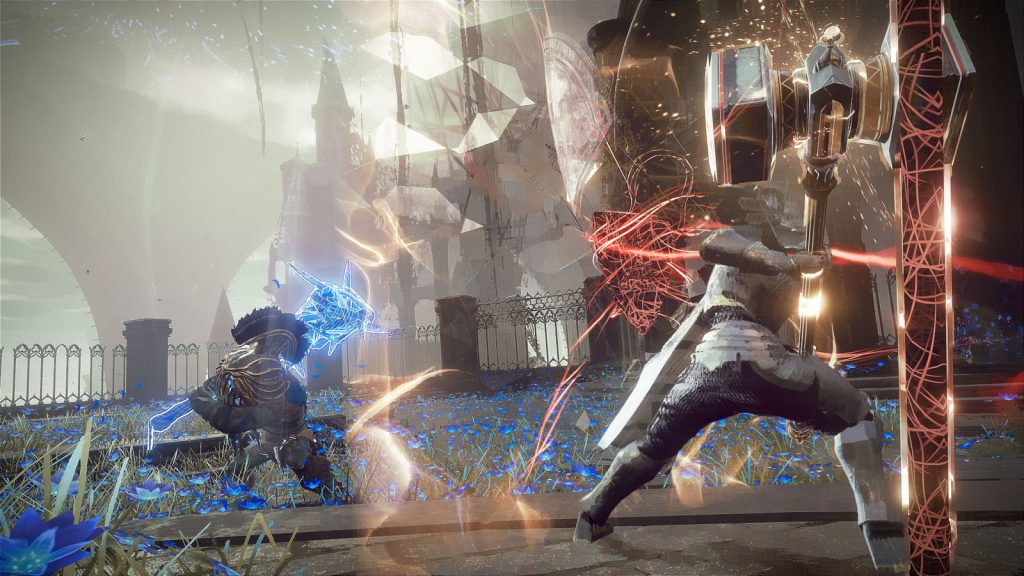 Katharine and I went hands-on with Babylon’s Fall last week, that online action RPG by PlatinumGames which falls in and out of memory as the years tick by. Still, when an invitation to the third phase of its ongoing closed beta test arrived, I couldn’t help but get excited. These are the folks behind NieR: Automata and Metal Gear Rising: Revengeance, after all, and now they’re making a live-service, co-op slasher. Sign. Me. Up.

As it stands, the closed beta only showed a very small, very early build of the game, but we’ve got some thoughts. Combat, exploration, and co-op were all on offer here, and there’s a fair amount to unpack. Look beyond the early build jank and there’s definitely potential.

You may not be well acquainted with Babylon’s Fall, so here’s the lowdown. Set in a fantasy world with an oil-painting aesthetic, this is NieR: Automata meets Destiny. You play as a warrior known as a Sentinel tasked with overcoming the Tower Of Babylon. There’s lots of hacking, lots of slashing, and copious amounts of looting. Not forgetting your Gideon Coffin, which is a funny name for what’s essentially two floating weapons on your back. More on this in a sec.

In this build, we were able to create a character out of three races: Huysian, Agavian, and Geleilion. Right now, there’s not much to differentiate them beyond their starting weapon type. I opted for the sword-based Huysian because they looked like a Dishonored NPC at a masquerade ball; snooty but elegant. Katharine went for the forest-dwelling archer Geleilion, mostly because their bird-like feather costume looked a lot more exciting than the boring grey armour of the hammer Agavian man, but in the end we needn’t have worried about their looks, as both our characters ended up wearing the same starter armour.

The Geleilion did have one extra trick up their fake feathery sleeves, though, and that was two Gideon Coffin abilities rather than one. My refined-boy had “Soul Vault”, which would’ve allowed me to fling myself in the direction of a tethered enemy had they been unlockable in this build, while Katharine had “Soul Snatch” (which would have let her absorb HP from tethered enemies) and “Soul Corrupt” (an ability that channels dark energy into souls of tethered foes to weaken them over time).

Once we’d picked our Sentinels, we were popped in a hub space, akin to something like Destiny’s Tower where you can see fellow players running about. It’s here where you’ll trade with NPCs and take on missions from the Quest boards. A blacksmith clanks his hammer and some guards block towering gates. There’s a sense you’ll eventually be able to alter gear and upgrade your Gideon Coffins here, as well as venture out into other parts of the town in some way, but again, we’ll have to wait and see how that develops in a future test.

In this phase of the beta, we got to sample one type of quest from the “Civic Cloister” section of the Tower Of Babylon, which whisked us away into a baroque-style dungeon split into multiple “chapters” – effectively increasingly difficult arenas filled with waves of enemies. Your job? Slash lots of goblins with shields and lanky archers and podgy fire-bombers to advance. Often, there would be a big boss at the end. Sometimes these would just be bigger versions of monsters we’d seen before, but others, such as the hammer-swinging “Igigi Warlord” were more bespoke. The latter entered an enraged state every so often, and we’d have to drain a separate stagger bar to stun him before we could go back to whaling on his health.

As expected, fights had that crispy Platinum feel – only here you can wield up to four weapons of your choice at a time. You’ve got one for light attacks and one for heavy attacks, both of which can be mixed and matched. Bow, staff, hammer, sword. Whatever takes your fancy. These are then coupled with your two Gideon Arms on the left and right triggers of your gamepad (keyboard controls weren’t supported in this build), which let you wear a pair of weapons as these magic, floaty appendages strapped to your back. The result is combat that’s a give and take relationship. Strike enemies with your basic light and heavy combos to feed your “Spirit” meter, which in turn lets you dodge and use your Gideon Arms to deal even more damage.

Combat is fast and fluid, and with four weapons in tow, combos look super cool. With melee weapons, it’s the sort of combat that feels crunchy and stylish. Button combos aren’t particularly complicated – if you’ve played a Platinum game before, Babylon’s Fall uses that familiar mix of following up light attacks with strong ones, and then whacking a fancy Gideon Arm finisher on the end. It’s nowhere near as intricate as Devil May Cry 5, say (try as we might, there was no effective way to launch enemies skyward, for example) but it’s definitely a step up from the automated throes of Final Fantasy XV.

Opt for a ranged weapon, though, and it’s a different story. I found the magic staff cumbersome and dull, with a reliance on repetitive orb-slings and not much else to draw upon. Katharine didn’t have many positive things to say about the bow, either – especially when her first mission lumped her with four of the poxy things. They’re a decent choice when mixed with swords and hammers, but on their own they devolve into a lot of tedious backpedaling while slinging equally repetitive arrows into oncoming monster skulls.

But hey, the Gideon Arms are fun. Activate these and depending on what you’ve got equipped, you’ll see a spectral sword slash your enemies or a staff unleash an enormous magic missile. The hammer proved to be deeply satisfying, as holding down the trigger let me wind up massive blow that could knock multiple foes to the ground and leave them vulnerable to attack.

I wouldn’t say there was much strategy involved in these fights, though. No matter how I sliced and diced, so long as I kept doing so I’d pull through. And what awaited me? More of the same, just harder. You see, Babylon’s Fall does the Destiny thing where you’ve got a character level and a power level. The former is determined by the EXP you earn in battle, while the latter goes up or down dependent on the gear you’ve got equipped. Tougher encounters in the Civic Cloister require higher power levels, so you need to grind these out by completing lower ranked quests.

Thankfully loot drops seemed pretty generous in our time with Babylon’s Fall. Complete Chapters and you’d earn Relics of different rarities. At the end of each quest, you’d crack them open, earn sweet gear and in turn become more powerful. Much like the combat, armour sets and weapons also looked very snazzy, indeed. There’s a fair amount of stats to absorb too, like boosts to Spirit regeneration, health, and so on. I’d imagine that these will play a bigger role in the full game, where team composition may matter more.

While it was a slim taster of what’s to come, Babylon’s Fall shows signs of promise. Questions remain around progression and whether there will be plentiful ways to grind out those levels, aside from clambering up the Civic Cloister repeatedly. And of course, how they’ll handle endgame stuff when folks have hit the level cap. But overall, I’d say we had a fairly good time. A tentative thumbs up from us, then, and fingers crossed the devs successfully spin this crunchy combat core into a moreish dungeon crawler.