Home » Backbone review: it’s not what you expect, but hot damn is it pretty

Backbone review: it’s not what you expect, but hot damn is it pretty 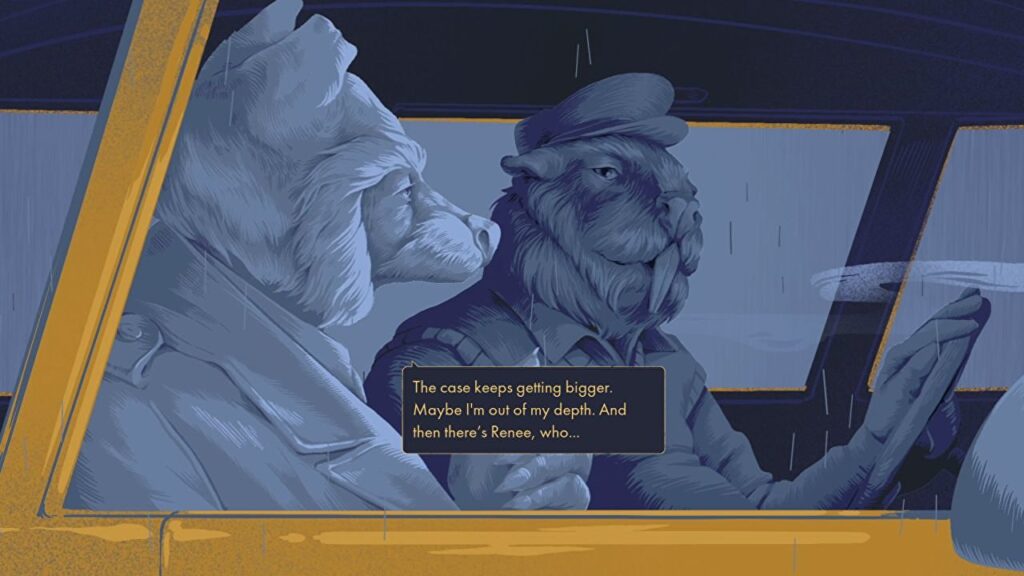 Backbone is less the detective noir you might expect, and more a story-driven philosophical exploration of empathy. In either case, it’s very beautiful.

An important part of having a lovely time with something is setting your expectations correctly. Just ask the two old ladies who I once saw going into a screening of Zombieland and leaving after approximately seven minutes. So in that spirit, it seems important to tell you that Backbone is not the point and click detective adventure game with all puzzles you might have thought it was.

It’s more accurately described as a grim, philosophical, story-focused noir game about collectivism vs. individualism, dressed up in the tropes of a detective puzzle game. Like The Good Place with more depression, or Disco Elysium with raccoons.

Backbone isn’t as unrelenting or dense as Disco Elysium, but it progresses in a similar vein. About halfway through, for example, the detecting/solving a murder bit gets, for all intents and purposes, dropped entirely. And I won’t spoil the specifics of this transition (which are incredibly, incredibly weird) but I do think it’s important you know that up front. Backbone is a good game, but if you were expecting something more like Monkey Island meets Zootopia then you might end up with some buyer’s remorse.

Backbone does want you to get into the mindset of a detective to start with, though. In the first part of the game, you’re doing a bunch of skulking around as betrenchcoated raccoon Howard Lotor, following leads and collaborating with a cool investigative journalist (who is also a fox). You’re initially digging into the suspect activities of a nightclub owner (who is also a bear), including blackmail, drugs, and good old fashioned organised murder. The puzzles in these early sections are good, and while some don’t really let you fail, a few of them are fabulous. Like figuring out password reset answers to brute-force access to a PC, or deciphering someone’s clues for remembering a keypad code. If EggNut wanted to make a full-blown puzzle game, they’d probably pull a blinder.

But these elements are gradually phased out as you carry on playing, until eventually you’re fully in fever-dream-full-of-metaphors territory. There is a point in Backbone that I guarantee will make a lot of people mutter, “Wait, what?”, which represents the final nail in the puzzle coffin. Once I shook off the surprise and got in the right headspace, though, I was still picking up what Backbone was putting down.

It pulls off the noir tone throughout, but its central point does feel laboured after a while, and there are a couple of events in there that I couldn’t quite understand, either on a metaphorical or literal level. Backbone also has that vague “animal species as allegory for racism” flavour – rodents are rarely allowed to be scientists, gorillas are in charge of everything, and most people dislike raccoons, for some reason – in a way that’s ultimately so surface level that it may as well not exist to incur the slight eyebrow raise that it does.

But I’ll largely forgive Backbone these missteps for two reasons. The first is that the dialogue in Backbone is smashing, regardless of whether you agree with the ideas contained therein. The loops get a bit tangled a couple of times, but for the most part having a chat with someone in Backbone is one of the best, most natural conversations you’ll see in a game. Your potential responses or questions will change depending on what you just asked or what the other character just said, and it all flows in a realistic way. Howard as a character exists in flux, and it’s your choices that can confirm him as empathetic, hopeful, or mired in self-pity and a vague existential guilt. This is exemplified in the little talks you have with Anatoly, an old friend whose wife is expecting their second child. You can choose to ask fully engaged questions about his family, or just bluntly not care unless it’s in relation to your own life.

The second reason that I will let Backbone get away with small irritations, is that it looks absolutely fantastic. Set in a sort of futuristic Vancouver, now a giant walled city in a post-apocalyptic wasteland, Backbone provides some cool 2.5D cityscapes rendered in extremely lovely pixel art. The depth to every scene, with distant buildings parallaxing along in the background and plants and junk doing the same in the foreground, almost makes everything feel fully 3D. Of particular note is the lighting: late afternoon sun spilling in through unseen windows, shop signs shining out of the darkness, and campfires throwing the characters around it into relief.

And then there are the dreamy, pulpy illustrations that open new chapters. Oh, be still my beating heart. Backbone is quite possibly the most beautiful game you’ll play this year. Sometimes style over substance is a valid approach. Not that Backbone is devoid of substance either, of course. But be prepared for that substance to have a very different texture than what you were expecting.