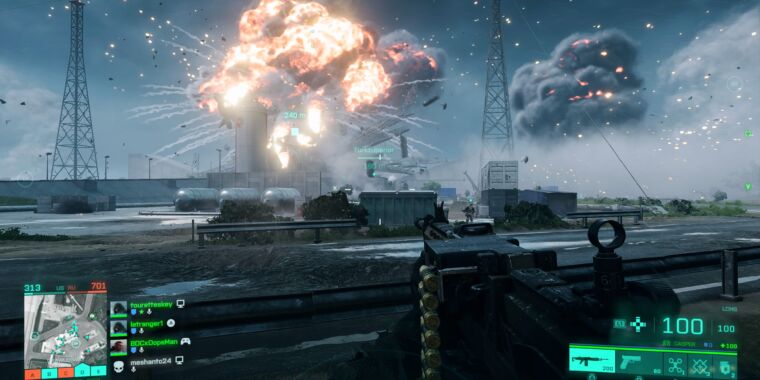 When DICE announced Battlefield 2042 would be delayed from this month to November, it joined a long line of other studios pushing back game launches due to pandemic-related development challenges. But after spending several hours recently with 2042‘s open beta on PlayStation 5, I wonder if holding if this multiplayer-only sequel back by a matter of weeks will be enough time to fix the glaring issues present in its prerelease build.

Multiple developers at the studio have addressed this, claiming the beta is already outdated by three months and that a lot of the laundry list of technical hitches and bugs that players discovered have been fixed since. In a Reddit post, producer Ben Walke said DICE made the decision to “cap” progress on the beta early so the team could focus its resources on improving the game’s launch build rather than pulling people away to polish up something only meant for a simpler prerelease representation of the real thing. But.

Boy oh boy, this prerelease had problems—and my own experience lines up with recent rumblings about how that timeline may not be entirely accurate. Regardless, with just the pandemic realities of working from home alone—which DICE pointed to when it announced 2042′s delay in the first place—the developer may still have its hands full making sure the game is polished and, uh, actually working by its November 19 launch date.

I personally didn’t encounter most of the worst of the bugs spotted by beta players. If you can dream it up, there’s probably a story of it happening: being unable to get past the start menu, loadouts including the wrong weapons, gun attachments going missing or changing at random, hard crashes, substantial performance drops, stuttering, weird camera problems with player POV, you name it. For the most part, I miraculously avoided any truly catastrophic issues, though my play-testing was still plagued by its share of snags and oddities.

Assuming it isn’t gutted at the last minute (DICE has been down that road before with lootboxes and microtransactions in Star Wars Battlefront II), 2042 replaces the series’ classic, class-based mechanic for a group of Modern Warfare-esque specialists who each have a unique skill and tool. Think a syrette pistol for long-range health boosts or a grappling hook. Beyond these differences, loadouts are still customized however you want. DICE announced 10 playable specialists for launch instead of the four job types of old, so the system may end up being more robust overall… if the company sticks with it. (Aside from rumors that specialists were added as a response to 2019’s Call of Duty reboot, EA has been sending out post-beta surveys to random players asking which class system they prefer.)

You could only play Conquest in the beta. This tried-and-true Battlefield mode has two teams competing for control of points on a map. In this case, we’re on a spread-out peninsula called Orbital. Up to 128 players can join a single match on current-gen consoles and PC (with PS4 and Xbox One stuck at the series’ previous standard 64 players). The jump can feel pronounced.

It didn’t always happen across Orbital’s fairly sprawling real estate, but when enough players converged in a general area, the chaos that could bloom from the explosive multilayered action going off all around often felt appropriately crazy and intense. This was the best thing about the beta. When 2042‘s systems were mostly working-ish, it felt like the full game might actually be able to deliver on the promise of a chaotic, dynamic evolution of the series at some point. Maybe.