Home » Battlefield 2042 will have wingsuits, tornadoes and 128-player battles

Battlefield 2042 will have wingsuits, tornadoes and 128-player battles 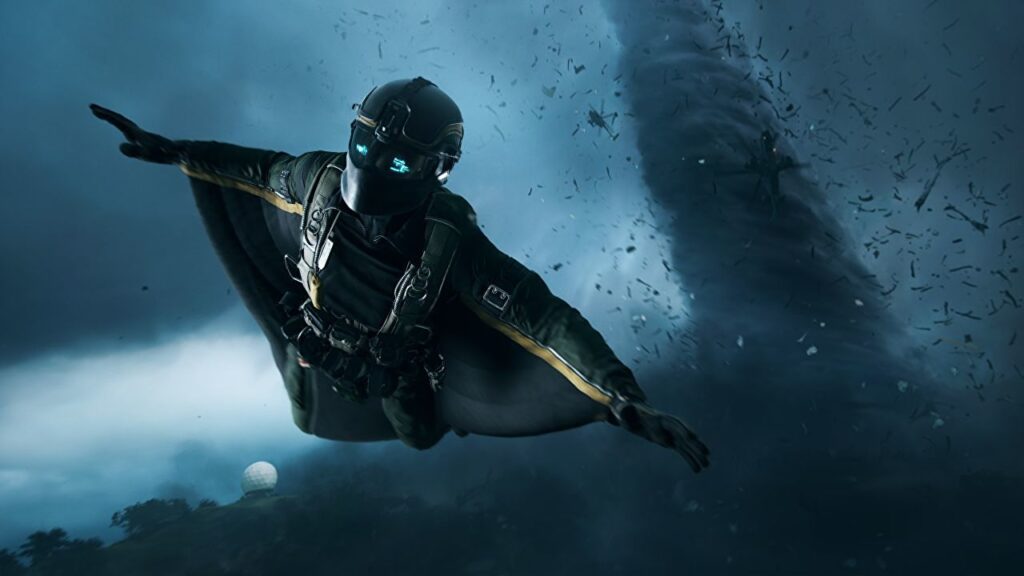 It’s called Battlefield 2042 and there are robot dogs. The next multiplayer shooter from noted mud artists Dice will be set in a near future where global civilisation is in decline. Food shortages, unrest and climate change has collapsed nations everywhere, leaving refugee soldiers fighting for an embattled US or a tired Russia.

Importantly, some of those soldiers have wingsuits. Others have recon drones, or sentry turrets. They always seem to fight in battles totalling no more than 128 players, and they don’t mind having a barney in the path of a tornado. Dice revealed all this and more in a press show last week, during which they repeated several times that there won’t be a battle royale mode. Look, here’s all the details, plus a blustery trailer.

Did you enjoy the Darpa dog? The skydiving? The heavy nod to this miraculous airborne manoeuvre? Good. It’s coming out on October 22nd.

As you can see, they’re amping up environmental and destructive events. One level has a twister that will travel on a path across the map. It can suck up players, vehicles and debris, spitting all of these things out into the wider world with the help of some new physics tricks from the studio’s updated Frostbite engine. It looks like this won’t kill the player, but allow them to parachute away relatively safely.

Other “dynamic world events” will occur, say the developers. This can be as simple as lowering or raising a bridge, or activating some anti-vehicle bollards. Or it can be as big as a sandstorm (I’m sure you Battlefield players are used to getting sand in your eyes by now).

The reveal trailer also shows a fight among some shipping containers in Singapore. There are automated cranes that lift and change the layout of these containers, switching up this sector of the map as you fight. Another map, set in French Guiana, features a launchpad, with a rocket that can take off, or fail to take off in a presumably disastrous way. “There’s of course an impact on the surrounding area” says Daniel Berlin, design director at Dice. These are just some examples. It sounds like every level has at least one or two major quirks. Although the scale of these quirks, and how much they alter each level, we don’t yet know.

But we do know the scale of some of the maps. They’re bigger, to accommodate the 128 players that will be warring across them, but they’re also structured into “clusters”. In the traditional Conquest mode (which returns) various places of interest will now have multiple capture points in an effort to eliminate the kind of “flag hopping” you might see in a sparser map. So you have to fight over that village or stadium a little harder. At 5.9km squared, a map called Breakaway, set in Antarctica, will be the biggest on release, we’re told. It features mountains, glaciers, an oil rig, and a high-altitude research outpost where you can jump off and parachute from. Or you can use a wingsuit, if you happen to have that skill.

See, character classes are getting a makeover. There are still broad “categories” of soldier, says Berlin – a support class, an assault class and so on. But within those you’ll choose a specialist. There’ll be 10 specialists at launch, but we were shown four of them. There’s a Canadian with a grappling hook, who still moves quite fast while aiming down the sights. A German with a dart pistol that can revive and heal allies (all characters can revive friends, but she brings them back at full health). A Russian, who is of course nicknamed “Boris”. He has a sentry gun that shoots faster when he sticks close to it. Then there is a South African recon sneak with a spy drone and a gizmo that warns him if an enemy is approaching.

Basically, every specialist gets a unique gadget. The wingsuit, for example, is tied to a specialist we haven’t seen yet. But you also have a slot for a secondary gadget, although it’s not clear exactly what fits in that slot quite yet. Regardless, unlocks and progression aren’t locked to each character. You’ll gradually unlock the same weapons, mods, and attachments for everyone. And these attachments can be changed on the fly. So in a quiet moment between shootouts you can take off your silencer and fit a grenade launcher underbarrel, or whatever you fancy. No need to fiddle on the post-death loadout screen. Handy.

So. Preset character skills, on-the-hoof weapon customising, skydiving to a different part of the map from a tall environmental elevator… If this is all sounding a little Apex Legends, then yes. Dice’s business daddy EA might be pushing one child to imitate the other, or it might just be the usual inspiration-nabbing (very welcome in my book). The maps look to take particular inspiration. One map in South Korea has lots of speedy ziplines across rooftops, for example. And what the designers are calling “clusters” sound a lot like the familiar idea of stacking a lot of focus around “points of interest”, as per battle royal level design.

But Dice insist that Battlefield 2042 has “no plans” for a battle royale mode. The old Conquest and Breakthrough modes return, asking you to capture flags or fulfill objectives while bleeding the enemy team of their respawn tickets. But a battle royale mode is not in the works. They repeated this fact often enough for it to be comical.

Instead, there will be a new “high stakes” squad-based mode, called Hazard Zone. But exactly what this is, Dice have not said. Whatever it is, we’ll have to wait to see exactly how it distinguishes itself from the dominant genre of the day. If Hazard Zone involves 20 squads parachuted into, say, a hazardous zone, and forces them to eliminate each other with some small twist, then that insistence of uniqueness might turn out to be ill-founded. But maybe it will be something wildly different. Let’s see.

The only thing they repeated more than “there’s no battle royale” was the word “sandbox”. And this is more immediately noticeable. Not only can you change weapon mods on the fly, but you can order vehicles on-demand. I’m guessing there’s some cost to this, but yes, any player can bleep-bloop on a device and their tank or jeep of choice will be parachuted in. I’m not sure if they can drop anywhere or if there are preset “drop points” sprinkled across the map. But considering the following advice from designer Daniel Berlin, I’m hoping for the former.

A battle royale mode is not in the works. They repeated this fact often enough for it to be comical.

The flow of Breakthrough mode, in which one team attacks along a corridor of territories while the other team defends, sounds like it will change thanks to those larger map sizes. Here the developers want to reduce the feeling of being thrown into a “meat grinder” by offering a wider frontline that will allow some flanking manoeuvres. Whether this means wider, more open areas, or just three bottlenecks instead of one, I don’t know, but for the sake of concise player control and more manicured encounters, I’m guessing they’ve gone with the second option.

And the bigger maps are better for pilots too, we’re told. “The feeling of flying in a fish bowl is gone,” says Berlin. A boon to all those helicopter squads and fighter jet aces.

One thing that is smaller, however, is the single player. The campaigns of the last two games have been ditched altogether, and considering this was often a weak part of previous games, it likely won’t be missed. In its place will be a single player mode in which you can fight bots, either alone or in co-op with some pals. There’s also one additional multiplayer mode, to be announced in a couple of weeks at EA Play, that will be a “true love letter to Battlefield fans,” says Berlin. This suggests an updated spin on the Rush mode of old (a bomb-planting battle of attackers and defenders). But we’ll see. They’re set to reveal more about that one on July 22nd.

All in all, it’s the maps that are most interesting from what I’ve seen so far. One map, set in Egypt, is split into two biomes. One side is a desert with canyons and a solar farm, while the other is hidden behind a vast wall, a lush settlement of green land and pleasant buildings. Pushing through from the famished, waterless side to the wealthy, emerald landscape beyond is destined to be a neat moment of assaulting warfare. Another map, set on a dried-up shoreline in India, features beached tankers and other ships, one of which houses a submarine where some cramped combat and panicked grenade spam is fated to occur. The reveal trailer shows soldiers tearing open the hull of one of these ships, another example of those environmental switch-ups Dice seem to be focusing on.

New maps will also come with updates (paid or free, I’m not sure) as Battlefield 2042 tries to refine the old “game as a service” model. There is often some grubbiness lurking beneath this business strategy, and I’m not sure how happy players will be to pay for a premium battle pass (they plan to have one of these too) when the game already costs them $60 upfront.

Nevertheless, updates are planned, and these will bring new fields ‘pon which to battle and new characters. There’ll be four new specialists in the first season, for example. The premium battle pass will get you cosmetics and stuff. But there will also be a free line-up of rewards for non-preemo players, we’re told.

All this makes sense. Battlefield V sold a heap of copies but it still wasn’t enough for the ever-hungry maws of capital, and its battle royale mode, Firestorm, did not hold the attention of players for as long as said big shots would like. Considering everyone and their mum is playing games with slow trickles of reward and ticker tape, Battlefield is obviously under pressure to do the same.

Whether it will all hold up, we’ll have to wait until October 22nd to find out (there is early access a week before this for, ugh, pre-order punks). Battlefield as a series has had ample experience at making massive maps, so it should be better poised than most to answer the challenge of the battle royalists. I don’t know what they have planned with Hazard Zone, but I’m curious to know more. We’ll let you know.