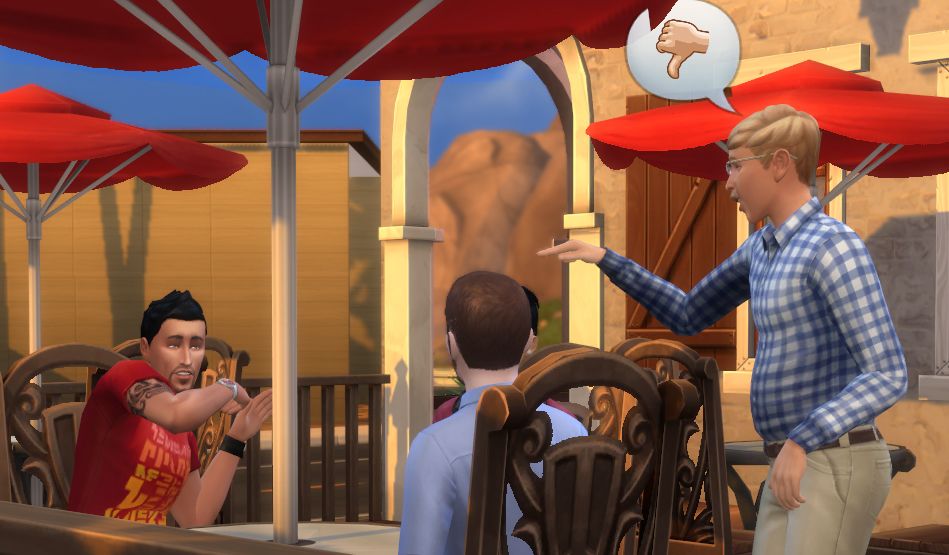 There’s really nothing new about playing The Sims 4 as a puppet master, tampering with and ruining other character’s lives at a whim. But typically, if you really want to mess with the lives of your neighbors, you need to roll up your sleeves and play as those characters. Why can’t there be an easier way to make people’s decisions for them?

There will be, with a feature coming to The Sims 4 on November 30. Without switching characters you’ll be able to influence Sims you’re not actively playing as by using what EA calls “Neighborhood Stories” but in the real world we call “meddling in other people’s lives.”

Want Bob and Eliza Pancakes to have a baby and then split up? Right now you’d have to take over their household to make such rash life decisions for them. With Neighborhood Stories, you’ll be able to accomplish this just by talking to them. Essentially, the non-player characters (NPCs) in The Sims 4 will experience life decisions, just like you do with your main characters. Should they have a baby? Should they romance another Sim? Should they accept a promotion at their job? Break up with their partner?

You’ll be able to serve as advisor for decisions like this and push them in the direction you want. You’ll even be able to plant the seeds of those decisions into their heads, Inception-like. Trash talk a Sim in front of another, and their relationship will nosedive. Push two Sims into a relationship with each other, just because you can. Break up a happy couple. Convince an unemployed Sim to get a damn job already. You’ll really be able to poke around in people’s personal business. Remember that time I ruined Santa’s life by making him move into my shitty house and raise a pack of diseased raccoons? Now I’ll be able to ruin Santa’s life just by chatting with him or his friends.

This is a little similar to a feature from The Sims 3 called Story Progression, which let NPC Sims make decisions such as moving away, getting married, or having kids, thus making your neighborhoods more dynamic and unpredictable (note: not everyone loved this feature). The difference here with Neighborhood Stories is your neighbors won’t have nearly as much agency. If an NPC experiences a life decision, they will call your Sim and ask what they should do before they actually do anything. You’ll be able to tell them yes, no, or let them decide for themselves.

It feels like EA is treading pretty cautiously around this update, probably not wanting to completely upend player neighborhoods by having all the neighborhood randos doing their own thing. This is an attempt to make the rest of the neighborhood more dynamic, but not so dynamic you aren’t still ultimately making all the choices for everyone.

And your meddling might not always be successful, either, as it’ll depend on how strong your relationship is with the characters you’re trying to manipulate, and how each character feels about the thing you’re trying to nudge them towards. For instance, if a character hates kids, you probably won’t be able to talk them into having ten kids just for a laugh. And if you suggest to Bob Pancakes that he should dump Eliza, and he really doesn’t want to, it might just make him mad at you.

Neighborhood Stories will also come with two new ambitions. One is called Villainous Valentine and will reward players for “destroying love lives, both their own and the love lives of other Sims.” Neighborhood Confidant is for those who want to wield a more positive influence over others. I’m pretty sure I know which one I’d choose. You can read more about The Sims 4 Neighborhood stories on the official site.