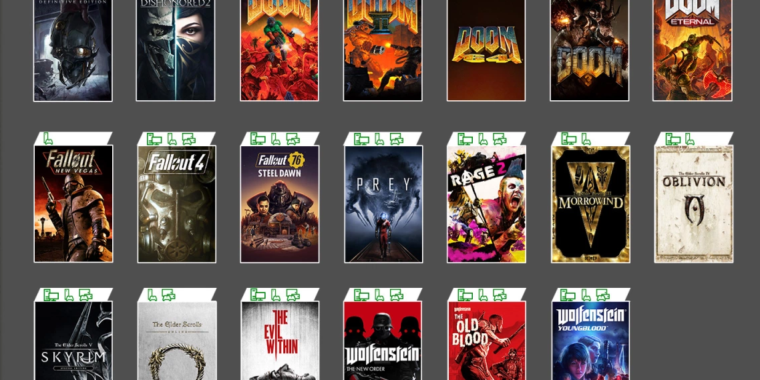 The Microsoft and Bethesda marriage pushed forward on Thursday with a roundtable discussion between major players from both teams, and it included an unsurprising announcement: starting tomorrow, March 12, a treasure trove of Bethesda games will land on the paid Xbox Game Pass service.

While the official announcement mentions a full roster of 20 Bethesda-published games on Game Pass, Bethesda already had some games in the service ahead of today’s video presentation. The “new” content for paying subscribers includes 12 games in all:

The rest are visible in the list at the top of the article, and icons indicate whether a game is available on Windows 10 and/or xCloud streaming. The list is missing a few biggies that have previously been published on Xbox consoles, including Fallout 3, The Evil Within 2, the 2016 Doom reboot, and the original Rage from 2011. It also doesn’t expand xCloud access to existing Game Pass games that previously didn’t work on the cloud—and so far, it doesn’t bring PC classics outside the Xbox ecosystem into the Game Pass family, not even for its Windows 10 tier. Still, seeing the list rewind back to Xbox’s earliest Elder Scrolls games is a treat for anybody hungry to explore the series’ glory days (horse armor notwithstanding) before we hear about the previously announced Elder Scrolls VI.

For now, the list doesn’t include current PlayStation console exclusives Deathloop and Ghostwire Tokyo, both slated to launch for Sony’s consoles by year’s end. Microsoft and Bethesda have yet to indicate if or when those games may land on Xbox consoles or Xbox Game Pass. Still, Microsoft has previously pledged that all of its first-party software will arrive day-and-date on Game Pass for paying subscribers, and Bethesda’s upcoming games now land squarely in that plan.

Ahead of the streamed discussion, as co-hosted by Xbox chief Phil Spencer, Bethesda game director Todd Howard, and Bethesda VP Pete Hines, the combined companies were careful to warn fans that it was not necessarily a “news” event—at least, in terms of new game announcements. Yet during today’s meeting, we got a few morsels of information. First, the first announcements of new content coming from the combined companies will arrive “by the end of this summer.”

And second, games from Bethesda’s back catalog are being worked on by Xbox’s “FPS Boost” team. The first game in today’s list to get this treatment on Series X/S consoles, as officially confirmed during the roundtable, is The Elder Scrolls IV: Oblivion, but we don’t know when that game will get its patch or when “other games” will get a similar treatment. The FPS Boost program for Series X/S consoles is so far in dire need of content, with only five games supported as of today. (Fallout 4 had previously been teased as part of this program, so we have a hunch it’s part of the upcoming slate of patch recipients.)

Update, 3:15 pm EST: Upon reviewing the presentation’s quotes, one statement from Xbox chief Phil Spencer stood out, which I’m plucking out for your perusal:

So obviously, I can’t sit here and say every Bethesda game is exclusive [to Xbox platforms], because we know that’s not true. There’s contractual obligations that we’re going to see through as we always do in every one of these instances. We have games that exist on other platforms, and we’re going to go support those games on the platforms they’re on. There’s communities of players. We love those communities, and we’ll continue to invest in them. And even in the future, there might be things that have either contractual things or legacy on different platforms that we’ll go do. But. If you’re an Xbox customer, the thing I want you to know is this is about delivering great, exclusive games for you that ship on platforms where Game Pass exists. And that’s our goal—that’s why we’re doing this. That’s the root of this partnership that we’re building. The creative capability we will be able to bring to market for our Xbox customers is going to be the best it’s ever been for Xbox after we’re done here.

In other words: if you were holding out hope that unannounced Bethesda games would launch either simultaneously or with a timed delay on Sony or Nintendo consoles, you’ll have to cross your fingers that those systems add support for Xbox Game Pass. Spencer’s choice of words on that point is pretty clever, in subtly nudging fans to request greater cross-platform support for that subscription service. Otherwise, future Bethesda games sound like they’ll be squarely locked up within the Xbox family of devices and services.