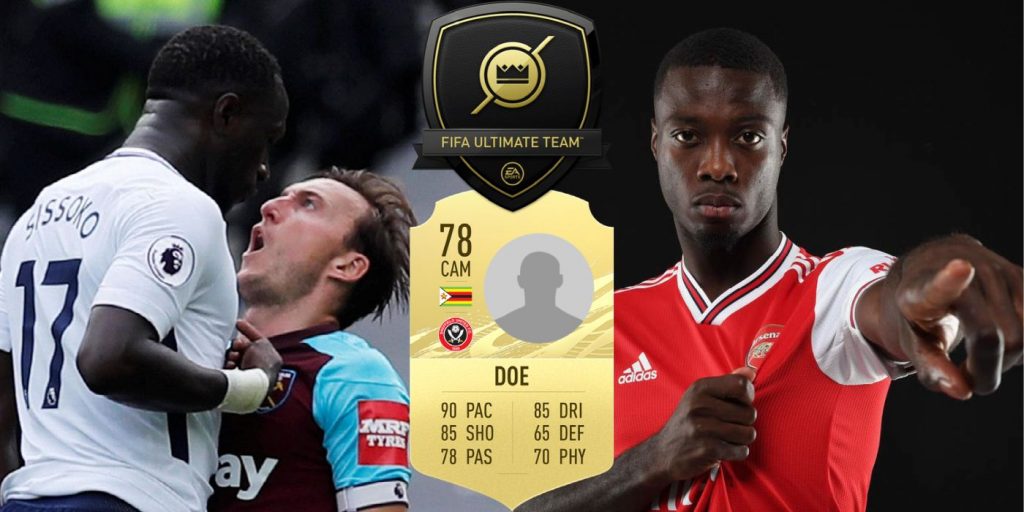 People that do not have the coins for big-name players can still take down the high-rated stars of the league.

Updated April 21, 2021 by Payton Lott: With all of the upgraded and special cards on the market, it can seem impossible to compete with pay-to-play teams. However, there are enough overpowered cards in the EPL to get by, even in rivals. Clubs can pick up the following cheap beasts for less than 2,000 coins on all platforms.

Richarlison is a well-rounded striker with three base stats in the 80s and a five star weak foot. Having the ability to cut in either direction makes the Brazilian star tough to defend. He may take a second or so to speed up, but Richarlison has a max sprint speed of 86, which is more than enough for a striker.

The card has great positioning and shooting near the box, but poor shooting from distance. Richarlison has viable strength and aggression as well. Players should use the card as a lone striker in a formation with three at the front to utilize his strength and physical prowess. Despite having slow acceleration, Richarlison is one of the best 81 rated number nines in the game.

The French midfielder has yet another great card this year. EA decided to give him a questionable pace downgrade, but many of Ndombele’s stats remain the same. The notable traits of the card are 87 dribbling, 80 passing, and 74 physical.

The combination of agility and strength make Ndombele a perfect possession midfielder. The card can defend as well with 73 standing tackle and 72 interceptions. The only issue with the player is shooting. Aside from good shot power, Ndombele will miss almost every shot.

For a 79 rated player, Sissoko has some impressive stats. The French center midfielder has 84 sprint speed, 90 strength, and 81 standing tackle. While he may not be the quickest player in terms of acceleration and agility, Sissoko is a force to be reckoned with in the center of the field.

The only downside to the  card is shooting. He has 85 shot power, but an abysmal 54 finishing. Similar to Ndombele, Sissoko is a roaming midfielder that can wall off defenders and create chances for the attackers up front.

Rodrigo is a top-tier player selling for discard prices. The Leeds product shines up front with 91 pace, 81 dribbling, 80 agility, and 80 finishing. The card has four star skills and great curve for finesse shots as well. Rodrigo is a dominant striker even at this point in the life cycle of FUT. He will be pushed off the ball, however, with sub 70 strength and aggression.

Clubs can have success playing the Spanish attacker at CAM because he has good vision and short passing. Attacking midfielders have the luxury of avoiding many of the challenges that strikers have to take on.

The Arsenal fullback has all the important physical traits for a defender. He is strong, fast, and can get up to crosses in the box. Tierney is one of the top choices for a left back in the EPL for clubs that do not have a ton of coins.

The player is an effective attacker as well, with passing and dribbling stats in the 70s. While there may be a few options for the position that are slightly better, gamers will not be able to find a card with better value for coins. The strong link to Odegaard is nice too.

As one of the greatest budget players in Fifa 21, Traore has to be mentioned as one of the best in the Premier League. Traore’s stats speak for themselves. He has 96 pace, 86 dribbling, and 80 physical. No defender in the game has a chance against Traore, and he will be faster and stronger than almost every player in the game.

Players should keep in mind that he does not have a reliable shot in the box and his passing stats are not great. Despite these downsides, every player needs to try Traore in Ultimate Team.

James is just a hair slower than Adama Traore and has incredible stats for a 77 rated player. The card may not seem great because James only has 76 dribbling, however, this feels a lot better than expected in-game due to his high agility and balance. James is exceptionally fast on the wings and will put defenders in difficult situations in the front third.

Raphinha is the third winger on this list, and he is a more well-rounded option for players. The card may be slightly slower, but Raphina has much better shooting and passing stats than James and Adama. Raphinha is the total package for a winger, he has the pace, dribbling, shooting, and passing to make an impact on any ultimate team.

Reguilon is an immensely effective player in Ultimate Team. He has 85 pace and 78 defending, coupled with 78 dribbling and a serviceable 73 passing.

There are no better options at the left-back position for the price. Players that are tired of getting left in the dust by pacey strikers should give Reguilon a try. Players can buy the card for only 1,500 coins.

Michail Antonio has been a viable player in Fifa for many years, and now that he is a striker, more players will have an opportunity to use him. Players that spend just 1,700 coins will get a striker with 85 pace and 84 physical.

Antonio’s subpar shooting and dribbling can be improved with the right chemistry style, and the card feels unstoppable at times. With the addition of four-star skills, Antonio is one of the most underrated strikers in the Premier League.

While Saint-Maximin’s shot power is good, players will have trouble finishing off plays in the box. Despite his bad finishing, Saint-Maximin is one of the great budget players in the Premier League.

Pepe is yet another dynamic player in the Premier League, which is riddled with cheap attackers. The Arsenal right midfielder has 89 pace with excellent dribbling stats. Unlike Saint-Maximin, Pepe has good passing and shooting attributes as well. Players can score some surprising goals with the player, and FUT clubs need to add Pepe to their team.

Nathan Ake is a well-rounded and reliable center back in Ultimate team. He has low/high workrates and at 5’11”, Ake is tall enough to clear through balls and crosses. Ake also has enough strength to ward off attackers, and 81 defending to win back the ball.

Players low on coins can add Ake to their team and see an immediate improvement. Ake can be found for 2,000 coins in the marketplace, which is a steal for such a consistent player.

Players can get the blisteringly fast Fredericks for only 1,200 coins. Fredericks has 92 pace, 73 dribbling, and 70 defending at right back. Players should use him in a formation with wing backs, as he is best utilized as a hybrid defender.

While Fredericks’ defending and physical stats are not as good as players might like, he makes up for these faults with raw speed.

As a 76 rated center back, Tomori has 80 pace and 76 defending. Apart from pace, none of Tomori’s other stats jump off the page. However, he has defending and physical stats in the 70s, and he is one of the fastest center backs in the Premier League. Tomori is only 1,300 coins on all platforms.