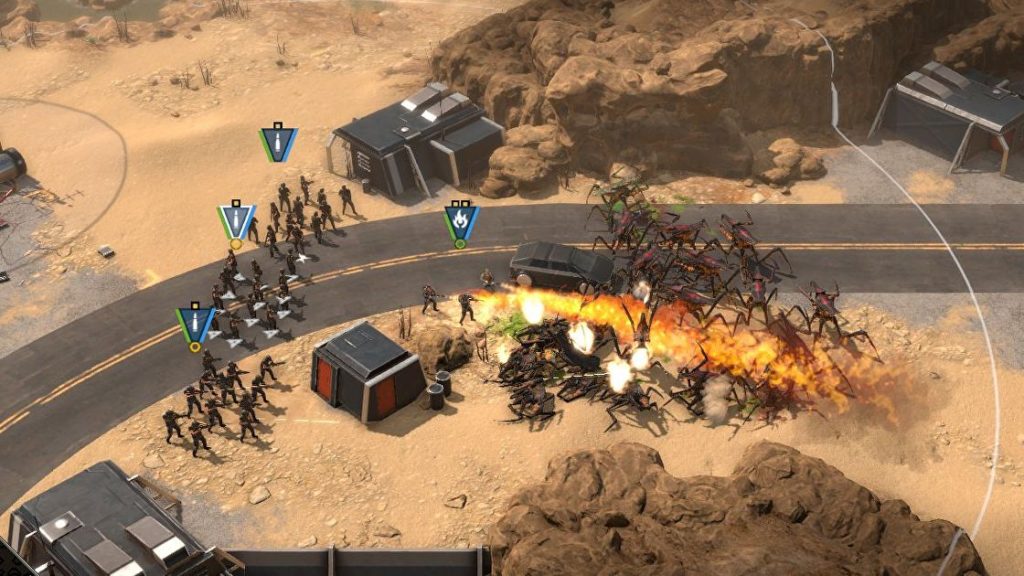 People get well into Starship Troopers, don’t they? Back in the before times when I was a teen, a friend of mine went to uni and formed a terrible metal band, and one of their songs was about Starship Troopers (I believe it included shouting “Roughnecks! Ho!” a lot). And don’t get me wrong: the 90s action-schlock film adaptation is very good. Replaceable cannon-fodder marines pumping bullets into giant skittering aliens, bombastic Join The Army And Die!! propaganda – It’s good stuff. And perfect grist for the RTS game mill! Hence you can play the demo for Starship Troopers – Terran Command right now, in the Steam Next Fest.

It is perhaps unfair to liken the production of RTS games to a mill. Though (as openly stated in a tutorial video for Terran Command) they often share common features and controls, they’re also some of the most finicky and precise games out there. Terran Command is no different. You have squads of little shooty-soldiers, and they shoot waves of angry alien bugs at your command. But I think that Terran Command is maybe too finicky.

Initial impressions aren’t bad. The bugs in Terran Command are fast and aggressive, ambushing you and dealing a lot of damage before you’ve had time to notice. In response, you must place your troops carefully, using actual tactical nous against an almost overwhelming enemy. Just because you can see an enemy doesn’t mean your troops can attack them – soldiers won’t fire through friendly units, for example, and terrain plays an important part in how and where you deploy your forces. It is pointed out several times that combat engineers and their massive flamethrowers are great in choke points, for example.

Thematically this makes sense, but in practise in the demo it doesn’t play out in a satisfying way for me. The bugs can ambush you almost without warning, but it takes too long to straighten your troops out if you were moving them en masse, and before you know it, you’ve lost a whole squad. I found the best tactic was to inch my units forward one at a time, in a sort of macro version of fire-and-movement advancement. Some of you might enjoy it, but I felt the game didn’t give me enough leeway for tense yet thrilling victory. Also, it is very boring travelling this way on some of the maps, which are big enough and (in the demo) uniformly yellow-orange.

At the same time, it’s been a while since I properly played RTS games, and I reckon it’s worth checking the demo out for yourself, which comprises three levels of strategic alien-beasting. If nothing else, Terran Command does a good job of capturing the empty bombast of the film (it was schlocky, but even the schlock was purposeful and intelligent). It makes a point of telling you that the line of human recruits is unlimited, capped only by your on-the-ground resources, bug nests are cleared out by just… just sending lads in there. Those brave heroes. And every time I was told to protect civillians they were killed almost immediately to no consequence, which was quite funny. Although that might just have been me.