Home » ‘Burn the witch!’ Hearthstone’s most annoying card is getting nerfed to the ground tomorrow

‘Burn the witch!’ Hearthstone’s most annoying card is getting nerfed to the ground tomorrow 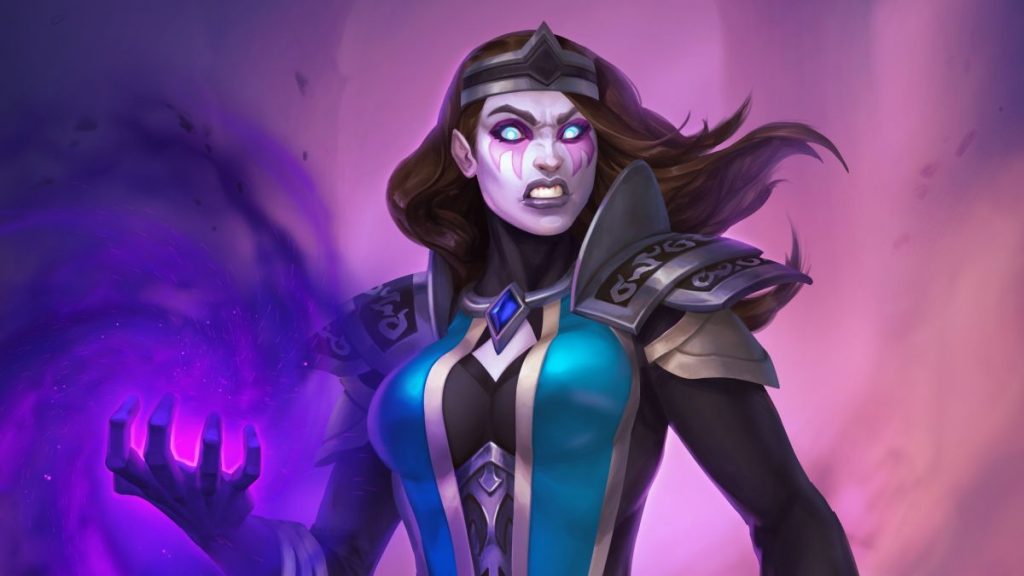 I’ve said it so many times that perhaps it doesn’t bear repeating, but once more with feeling: The current Hearthstone team does not mess about when it comes to intervening in the meta. Each major release is swiftly followed by waves of balance changes designed to course correct the player experience. The next patch, which drops sometime tomorrow, is the third of the current United in Stormwind expansion cycle, and brings with it a groaning smorgasbord of nerfs, buffs, and even (swoon!) a couple of outright bans.

The full patch notes are here, but let’s start with what will be the headline for a lot of players: The change coming to Mindrender Illucia, which is the Priest Legendary which swaps your entire hand of cards with your opponents’ for one turn. Sounds like a cool effect, you might think. And you’d be right, but when you’re on the receiving end it’s also annoying as balls.

Illucia is mostly used in aggressive Priest decks to lock the other player out from doing anything useful at exactly the moment they hope to stabilise, essentially giving the Priest a free turn to dish out pain uncontested. After tomorrow, Illucia will give you a copy of your opponent’s hand, rather than the actual cards themselves. Still a powerful tool, as it’ll enable you to snag cards you wouldn’t otherwise have access to that might prove useful—such as damage spells—but no longer the silver bullet it once was.

Here’s Blizzard explaining the nerf: “With the refinement of Shadow Priest in recent weeks, Mindrender Illucia has been overperforming in the archetype, in an unintended way. Instead of being used as a late game disruption tool, Shadow Priests have been using Illucia as an early game play to essentially skip the opponent’s turn. This change is aimed at removing that problematic gameplay… while still keeping her in a similar space with her effect.”

The reaction to card nerfs is often a little overheated, but suffice to say the community seems to think it’s the end of the line for her witchy trickery.

Other cards being nerfed tomorrow in Standard include Demon Hunter’s Irebound Brute, which will cost 1 more Mana, two changes that affect the Quest Shaman deck—Perpetual Flame moves to 2 Mana, while the third part of the Command the Elements questline itself will now require you to play three Overload cards. Moving onto Warlock, Runed Mithril Rod will cost 4 Mana, and The Demon Seed questline itself is also being changed. On steps one and two you now need to take 8 damage (up from 6 and 7 respectively) which ought to slow the powerhouse down substantially.

In Wild, however, it’ll be slowed to a complete standstill—because The Demon Seed is being totally banned there. Explaining its reasoning, Blizzard wrote:

“In Wild, where there are many more efficient self-damaging cards, The Demon Seed can be completed at an unintentionally fast rate. We are banning the card to protect the format from the problematic gameplay it created. When The Demon Seed rotates to Wild, we will unban it and reposition the card to be more appropriate for the format.”

These days, Team 5 knows how to taketh away, but it also likes to giveth a little—and so we’re getting a suite of buffs aimed at improving the playrate of underperforming but interesting archetypes. Beast Hunter mains can look forward to paying 1 less Mana for the Leatherworking Kit weapon, while Selective Breeder‘s stats improve from 1/1 to 1/3. Meanwhile, Hero Mage enjoyers will be excited by the prospect of a 2 Mana price cut for Mordresh Fire Eye (who now also becomes an 8/8), and only paying 1 Mana for Wildfire. The latter is such a good change I wouldn’t be surprised to see it pop up in Spell Mage.

Finally, the Warrior questline gets a hattrick of indirect support in the form of buffs to Stormwind Freebooter, Stonemaul Anchorman and Bloodsail Deckhand—all of which get one extra Health at no additional cost.

Moving over to Battlegrounds, there’s a substantial changelog to chew through. In terms of heroes, Shudderwock‘s signature power will now cost 2 rather than 0, while Galewing‘s five-turn option will no longer upgrade your Tavern Tier for free, but will instead offer a 5 Gold reduction. Most interestingly, we’re told the odds on which Hero Power Master Nguyen randomly offers have been tweaked, presumably to prevent busted ones like Reno Jackon’s from appearing so frequently.

As is always the way, a bunch of minions have also had their Tavern Tier, stats and effects tweaked, most notable of which is the whopping nerf to Impatient Doomsayer (below). And not before time. That card was single handedly spitting out enough demons to relaunch the Burning Crusade. Also hit hard was Leapfrogger, which was way too good for its Tavern Tier Two status. Here’s the full list.

Finally, for the brave souls still slugging it out in the Arena mode, Blizzard has something to lighten the load: Ramming Mount is being banned from the draft pool. I think that might be the first time a non-Hero card has had to be banned for being too strong in Arena. There are also a couple of changes coming to Duels mode but I don’t get paid enough to stay on top of Duels balance, honestly. Patch 21.3 will likely go live mid-morning PST tomorrow, at which point I will once again be taking my golden Warrior quest deck to the high seas.