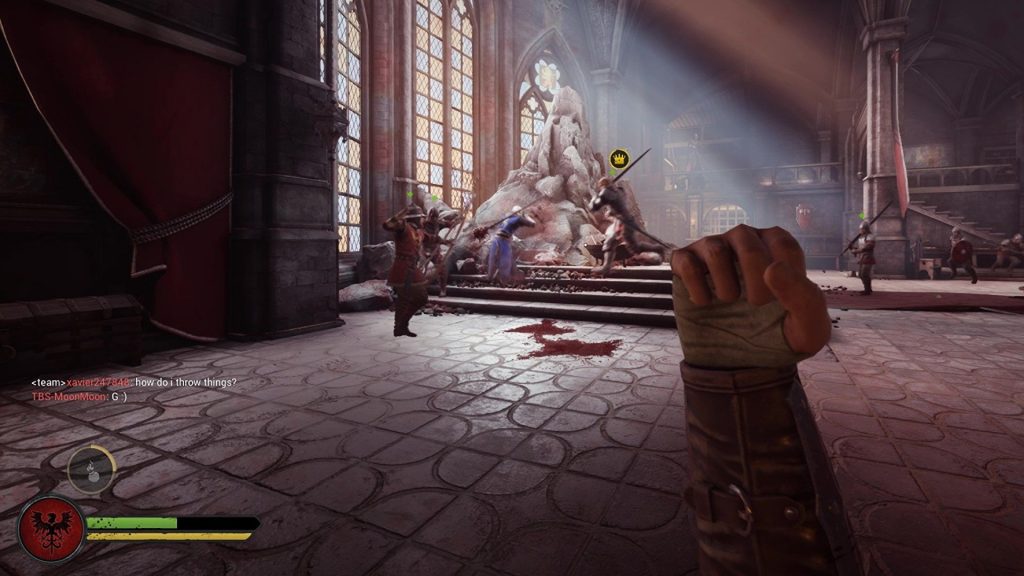 The tutorial for medieval first-person slasher Chivalry 2 felt like I’d attended my first zumba class run by Stanis Boratheon. I was told the art of warfare lay in the swing of your hips, not your sword. And that to riposte, you match your opponent’s movements. But to break someone’s guard you use your legs. Got that? Orders were barked, “sir yes sir”, and I barely kept pace.

Then I was enlisted into the Siege of Rudhelm. I’d need to stoically defend a fortress with all the moves I’d learned, and I was stressed out. So when the gates opened and I roared my battlecry, naturally, the little I remembered escaped from my mouth and into the breeze. I swung wildly with zero hip-action expecting to get cut down, only to find it worked quite nicely. I even sat down mid-battle and remained unscathed. Then I realised no-one knew what they were doing at all, and I relaxed.

Having played a Chivalry 2 preview with a host of influencers and journos for a solid three to four hours, I’d say it expands on the first game in many ways. For one, it looks nicer, and battlefields are now crammed with fun stuff to pick up and lob at enemies. I particularly enjoyed chucking lopped-off heads and watching them thunk off chainmail. And of course, there are lots of new moves with which to carve up your opponents.

Cor, there were so many moves I could have employed. There’s this complex combat system; this intimidating sequence of moves to checkmate your enemies with. You know, the ‘ol feint and dip; the hip swingarooney; the riposte into counter slash; the jab to throw off an enemy’s rhythm – so many possibilites. And I used precisely zero of these maneuvers, which sort of sums up Chivalry 2, for me at least. I – and I’m pretty sure everyone else – swept all the pieces off the board, picked it up, and battered each other with it.

I was impressed by the scale of the siege and the way the objective shifted as we were pushed further and further back into the confines of the fortress. Eventually, one player was assigned as the king, and we needed to protect them in the throne room, i.e., lay everything on the line for our leader in a crash of limbs and metal.

It was in the tight confines of this final stand that I spotted a bench, and in a spur of the moment decision, parked my arse on it. Not only was I thrilled I could even rest my cheeks on this stone rectangle, it allowed me to observe the chaos as a bystander. It was fun getting involved, but there was something even more comical about watching it unfold before me. In many ways, I think it revealed the very essence of Chivalry 2.

As I sat there and observed two waves of bodies slam into each other repeatedly, I learned that Chivalry 2 isn’t just a medieval first-person slasher, but a raptor simulator.

As I sat there and observed two waves of bodies slam into each other repeatedly, I learned that Chivalry 2 isn’t just a medieval first-person slasher, but a raptor simulator. The key to success in this game is to behave and act like a prehistoric lizard with a powerful big toe. Sure, there was success to be had if one mastered the art of the duel, but there was greater honour in spotting a fellow theropod and coming to their aid. Watching allies burst into intense one-vs-ones with a screech and a bludgeon never got tiring. If anything, I felt energised by the comradery on display, letting rip with a whoop or holler from time to time.

Occasionally allies and enemies would spot me sat on my bench mid-fight. They’d tussle for a bit, spill some blood, then realise a curious individual with his palms resting on his knees had been watching them the whole time. They’d call a temporary truce, wander over and give me a nice yell, perhaps a little jig, then either resume their fight, or sprint back into the blue and red static of death.

No-one joined me on my bench, though. Sometimes a straggler would wander over, almost press their spear against my chestplate, but back off after I gave them a big, friendly wave. Incredibly, the whole time I was sat down (a long stretch), I remained totally unscathed. Not a single soul scratched me. Most were friendly.

I guess I had discovered the duality of man while sat on that bench too. Chivalry 2 isn’t some super serious medieval simulator. This is a game that doesn’t take itself too seriously, and in doing so, the fights that break out are joyful. There’s a sense that everyone is pals, and slinging swords for a laugh. Raptor claws are bared, but after the blood is let everyone sheds their tails and resumes being buddies. It was like I had the privilege of watching a Walking With Dinosaurs reboot episode before it aired to the rest of the world.

Chivalry 2 is a fun time. It’s like the first one, but facilitates the silliness better with shiny graphics, and more moves, and maps, and emotes. This will be familiar territory for fans, but it’s territory that supports more goofy medieval antics. There’s even space for you to take things seriously if you want, just be sure no-one steals my bench yeah?