Conan Exiles: 10 Great Areas To Build A Base 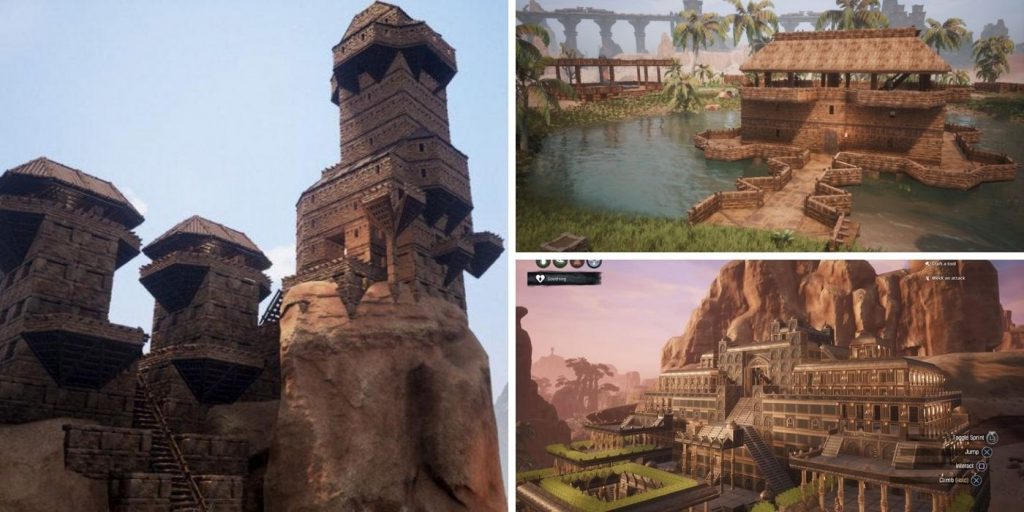 A survival game, Conan Exiles is always expanding and offers plenty of places to set up bases. Which areas are the best for building?

The map of Conan Exiles is huge and only getting bigger as more DLCs release. All the space on the map means that there are a ton of areas for players to build and plenty of space for some impressive bases.

While it is true that players may be interested to build on an area of flat land, but other locations like cliffs, mountains, and valleys are also good. Some players have taken a shining to the old ruins in the jungle since building is possible there. Whatever build a player is going for, location is always important.

Bonebreaker’s Bend is a great place for a base that offers tons of resources. It is pretty close to where players initially spawn in when starting the game. They can follow the river to the right until they find a stone bridge that hangs over the river.

This area offers access to silk due to the spiders that reside there. There is also plenty of metal in the location along with trees and stone. This location also has a few good flat locations for people who aren’t used to working in mountainous terrain.

Further along the river from Bonecreaker’s Bend is Claw Outcrop. This location offers a couple of areas to build for creative players, but one of the best is the cave.

Around Lookout Point players will get access to tons of metal to use for crafting, along with trees, water, and stone. All of the materials are useful, but this location offers great building opportunities as well.

On a nearby island that can be seen from Lookout Point, players will have access to flat areas for base building. They should be a bit wary because of the fighter on the island, but players who kill him can get some flawless gear. There are also Komodos on the island so players should watch out for those as well.

In between Waterhole Outlook and Marauder’s Muster is a large flat area for players to build. This area is close to the water and is surrounded by metal. Players who choose to build a base here will also be near the Black Galleon.

6 Gate Of The Moon

These locations can be good to build in and players can create some impressive builds with them. There is metal nearby the area, but it is a bit of a walk away. Players who build here will be out of the way and won’t need to worry about other players as much.

One of the greatest areas on the map for its defensive capabilities is the islands located in the far eastern area of the map. These island chains might be very tall and a pain to climb, but each one can be built on.

To the East of the Great Dam is a large indoor location that players can use to their advantage. It offers a great defense thanks to the small opening it possesses, allowing players to create a defensive structure inside.

The inside of the building is large enough to build a base that is a few stories tall. This area also offers some good resources like wood, stone, and metal. The downside is that it is a very popular location so it might be a hard area to snag from other players.

RELATED: 10 Things That Make No Sense About Ark: Survival Evolved

For players looking to get access to an area that has more metal than anywhere else, they will want to make a home in The Crevice. The Crevice is a popular base location, so players who are on a public server might have a hard time claiming this area.

If a player is lucky enough to get it, there is a ton of metal scattered throughout. There is also a large cave that has plenty of space for players to craft a bigger base. It also has passive animals nearby for hunting. Players who make a base here will be well-guarded thanks to the natural cave system.

There is an island located to the south of Scavenger’s Birth that will give players an out-of-the-way area for them to build their base. This area isn’t visited often by players and can be a good location for someone who is just starting out.

The main problem with this location is that it is far away from metal so there will be a bit of a hike to get some. Although, players can build a decent defense on the island to keep themselves safe if players do happen to come by.

NEXT: 10 Games That Defined The Survival Horror Genre & Where You Can Play Them


Next
Escape From Tarkov: 10 Pro Tips For The Reserve Map

Aden Carter is a lover of all things involving video games and pop culture. He is a gamer at heart who volunteered at Impulse Gamer writing reviews before finding work at Valnet, inc. Carter enjoys everything from puzzle platformers to high action shooters, ultimately loves a good RPG. In recent years he received his bachelor’s degree in creative writing from Full Sail University in Winter Park, Florida.