Creeper World 4 is a triumph of consistency 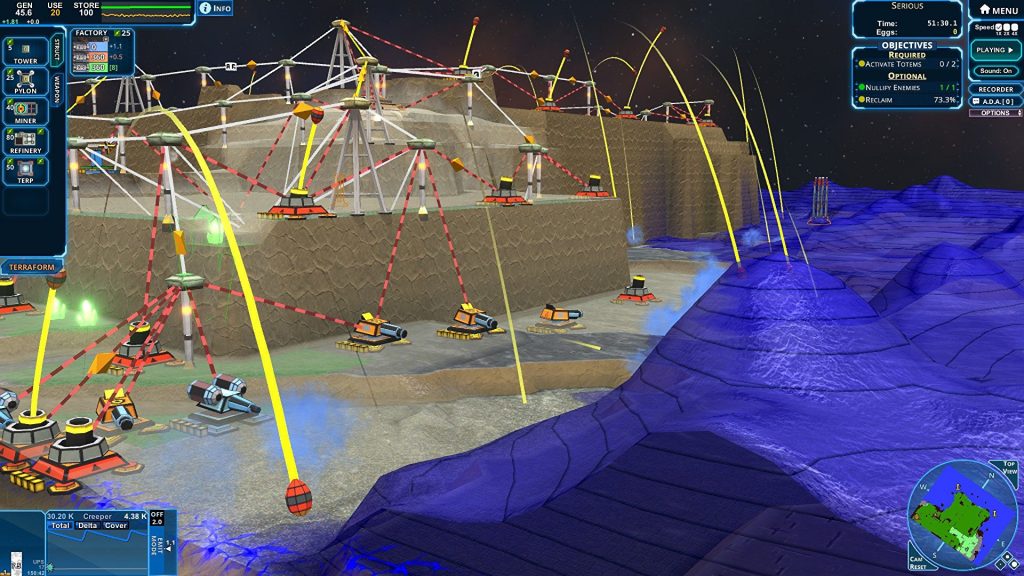 This is The Rally Point, a regular column where the inimitable Sin Vega delves deep into strategy gaming.

Consistency. That’s the word that comes to mind.

It’s one to use carefully when talking about a sequel. I’m prone to criticising games, particularly long-running series, for iterating gradually rather than taking bigger chances. I’ve bemoaned Tropico’s rehashes. I’ve whinged about everyone copy-pasting XCOM to a fault. I’ve sent guys to show GTA a picture of Saints Row before throwing it through a window.

But here’s Creeper World 4, quietly releasing at the end of 2020 in an already busy month. I can’t say anything about it is revolutionary, or even drastically different to the rest of the series. And yet I become utterly engrossed every time I play it. Again.

Creeper World is a series of real-time strategy games about building a network of gun emplacements and infrastructure to support them, in order to fend off, and ultimately destroy an ever-encroaching tide of murderous purple liquid. In genre terms, they’re as their creator said when speaking to RPS contributor Alex Wiltshire. The heart of each is a strategy game distilled, but rather than simply pared back all the way to pure ethanol, they’re then flavoured to keep things interesting.

Creeper also taps into a similar dynamic to zombies, if you agree with Simon Pegg’s interpretation.

They most resemble tower defence, with a shot of puzzle solving. There’s also an optional hint of score attack, as leaderboards encourage those who are so inclined to race through each level as fast as possible. All three of these are genres I tend to bounce off, which should give you some idea of how excellent the series is. You spend energy to build generators, which increase your energy income until you can support a gun turret, then different kinds of turret, then specialised defence or utility units (most notably the ‘terp’, which burns energy to alter the terrain). Typically each level has a particular threat you need to shut down, or item to collect by stretching your network close enough. And all the while, the creeper is coming.

That’s the other thing that defines them. I wrote in 2016 that the creeper is the best monster in games, despite sounding a bit absurd, but precisely because of its simplicity. It is pure destruction. In the third Hitchhiker book, Douglas Adams described a group of killer robots as displaying an emotionless emotion, “not like a gun or knife is deadly, but like a brick wall across a motorway is deadly”. That’s exactly the kind of cold, fundamental malevolence the creeper exudes. It colours the series with a unique kind of dread.

Creeper also taps into a similar dynamic to zombies, if you agree with Simon Pegg’s interpretation that the only real danger they pose is to punish carelessness. In the story, the one certainty of every human society is that eventually, the creeper will return. It might be overnight, next year, or thousands of years from now, but it will come back the moment we dare to forget about it. And that works perfectly, because the same is true in play terms too; it only takes one badly designed energy grid, one under-protected front for the creeper to break through and threaten to undermine a level. Complacency spells death for civilisations in the setting, and for the player within its levels. It’s consistency that protects us. Keep those defences up. Build those backups. Maintain those inputs.

And this is more true in Creeper World 4, whose headline feature is a fully 3D simulation. Where previous games were resolutely top down or side-on only, you can now see those deep, sinister pools, and ominous waves physically loom over your suddenly tiny base (although the view is restricted to more practical angles and magnification until you press shift+F for the more dramatic camera mode).

The tangible consequences of this new perspective are a little esoteric. Height now affects your weapons’ ranges and the reach of your energy/building network, making those terraforming strategies a little more important. A few enemy types are a bit more dangerous, notably aerial spores as they can now arc over missile defences to hit targets you got complacent about when you expanded. But the biggest benefit is one that some players will probably consider a drawback: it sort of creates a fog of war.

These games always had attractive, if modest art direction, and solid audio that made them oddly relaxing during the plateau phases of a level. The change to 3D makes it more tempting to spend some time looking around, just watching your machines pump resources about. The nullifiers powering up, the energy packets flit down the line, the mortars gouging momentary divots out of the gloop. Checking in on that reservoir of anti-creeper (a powerful liquid that does what it sounds like). Examining your northerly front to determine whether it’s strong enough to push forward yet. Getting a good angle on that big stream of oh god what just exploded oh no no when did the tide get that high there?

It subtly encourages complacency. And I think that’s good. You can switch to a top-down view at any time, and the default view covers you most of the time anyway, but come on. You’re gonna take a closer look. It’s neat.

Creeper World 4 is not a difficult game, though. Like its predecessors, levels are typically at their hardest for the opening phase, where you scramble to get enough defences up. Achieve that, and you’ve pretty much already won unless you get careless, and even then, a base with a few redundancies can often patch up a mistake. It taps out the same rhythms as always: hasten, then consolidate, then tidy up. The occasional curveball level usually telegraphs a solution before the hammer drops, and since they rarely take more than an hour (and usually far less, especially if you play strictly to the objectives instead of eradicating every gungey trace), a restart hurts little.

Creeper World 4 is, in a word, the same. But subtly better.

Where a typical tower defence is sort of fire and forget, and you’ve often lost long before you can do anything about it, Creeper World gives you full control over the pace, aside from the occasional scrabble. I’m a slow player, and enjoy establishing an equilibrium before systematically clearing out whole levels, plunging little pioneer cannons and mortars and sprayers directly into creeper waves in little commando raids. But you might favour assassinating the hostile producers, or starting in the most dangerous spots and trying to shut down the enemy and do the level backwards, or ignoring threats and going all-in on rushing the objective before the first wave hits.

Across all these approaches, Creeper World 4 retains an inexorable pull. The constant gunfire becomes a hypnotic beat. The creeper itself is both menacing and strangely calming, and the ripple and flow of its dreadful liquid not so much viscous as… slowed. It’s like it moves on a slightly different timeline, which emphasises its sheer otherness, its wrongness. Its very nature, that slow inevitability, invites a complacency that you can’t possibly blame on anyone but yourself. Between timers, audio cues, and expository texts, you can seldom accuse it of not giving you enough warnings.

And those texts are again fine. You’re a scientist being flung across the galaxy after an experiment gone wrong, flummoxed by this unfamiliar threat. Along the way you gradually gather the tools needed to fend it off and rebuild, this time including some new ones like the strange pyramids that punt out autonomous anti-creeper drones or pumps. It feels more hopeful this time, with a supportive AI and encouraging messages from an ancient cult, but it’s more about a faintly desolate mood and overarching concept than about plot specifics. Beyond that of course are the user-made maps, which promise months of free unofficial updates.

Creeper World 4 is, in a word, the same. But subtly better. Even if you prefer the 2D approach, you’ll probably find this outing different rather than worse. It’s the one I’d recommend over 3, but it won’t fully take its place. And ultimately, that’s an achievement in itself. The transition to 3D is a huge design challenge that’s easy for us players to trivialise, and recapturing the magic so completely is progress. Complacency might be the enemy, but consistency is our friend. And we need a friend right now. It’s creepy out there.