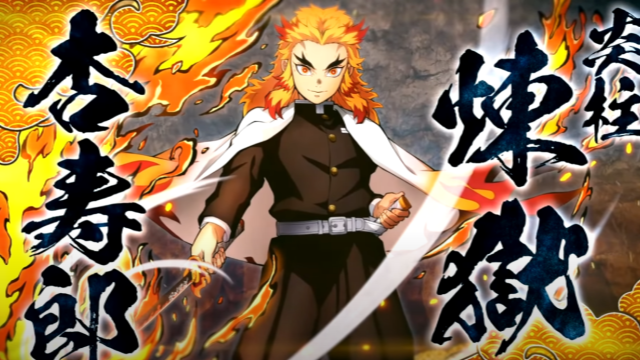 The upcoming Demon Slayer game is adding a fan-favorite character to its roster. The Flame Hashira Kyojuro Rengoku will be joining the fray in Kimetsu no Yaiba: Hinokami Keppūtan. This comes fresh off his appearance in the recent Demon Slayer movie.

The news of Rengoku’s inclusion in the Demon Slayer game comes from the official Kimetsu no Yaiba: Hinokami Keppūtan Twitter account. The post gives us a good look of what the powerful swordsman will look like in-game. Additionally, a gameplay trailer for Rengoku was revealed, which you can find below.

Rengoku is the tenth playable character to join the game’s ever-expanding roster. Here is the full updated list for the game’s playable roster:

The Demon Slayer game Kimetsu no Yaiba: Hinokami Keppūtan is developed by CyberConnect2, the studio that adapted Goku’s epic adventure in the video game Dragon Ball Z: Kakarot. The game will include a single-player mode that will give both newcomers and fans of the series the opportunity to play through the first 26 episodes of the anime. There will also be a Versus Mode that will allow players to take their favorite characters from Demon Slayer and duke it out.

Demon Slayer: Kimetsu no Yaiba began as a manga series written and illustrated by Koyoharu Gotouge and was serialized in Weekly Shonen Jump from February 2016 to May 2020. The anime television adaptation aired in Japan between April and September 2019. The direct sequel to the anime series, the film Demon Slayer: Kimetsu no Yaiba the Movie: Mugen Train, was released in North American theaters last month. In its first weekend, it earned $19.5 million across 1,605 U.S. theaters.

Kimetsu no Yaiba: Hinokami Keppūtan will launch in Japan on PlayStation 4, PlayStation 5, Xbox One, Xbox Series X and S, and PC via Steam later this year.