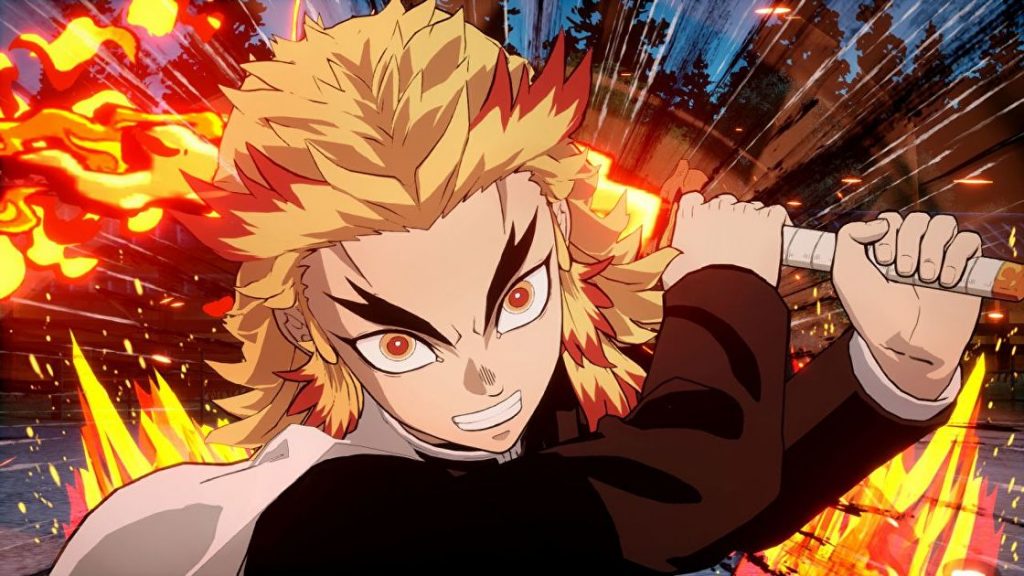 Although the playable roster of The Hinokami Chronicles is feeling the lack of demons right now, there’s a lot to enjoy from the characters who are there. This 3D fighter delivers on the promise of a power fantasy of Gotouge’s manga epic.


I love a bit of anime fighting. The darting back and forth over a battlefield the size of a small town, the gravity-defying jumps through the air, the razing of entire cities with the flick of a thumb, the volume of someone’s yell equating to their increase in power – it’s all equal parts enrapturing melodrama and total lunacy.

Demon Slayer -Kimetsu no Yaiba- The Hinokami Chronicles gets this. It gets that, when I am playing a 3D fighting game adapting a popular manga, I really want to inhabit the part of an incredibly wholesome anime boy, journeying across feudal Japan to cure my younger sister of her demonic sickness and smack around some otherworldly folk on the way there. Tanjiro Kamado is about as pure as anime protagonists come, and if there’s one lovable anime lad whose shoes I had to step into, it’d probably be his.


That’s the main cut-and-thrust of The Hinokami Chronicles, truth be told. It’s very much a power fantasy for all the heroes in the first few instalments of Koyoharu Gotouge’s manga saga, guiding you from the very beginnings of Tanjiro’s journey to become a Demon Slayer, all the way to the climactic showdown at the end of the cataclysmic Infinity Train arc. The Hinokami Chronicles beckons to seasoned viewers of the anime adaptation and those who hold Gotouge’s manga dear simply by positing a hell of a good time with all the characters you know and love.


The act of actually playing The Hinokami Chronicles is a bit like whacking action figures around as a kid. You can play as any of the heroes from the Demon Slayer saga, pitting the likes of the stoic Tanjiro against the brutish Inosuke, or the helpless Zenitsu against the intimidating Urokodaki, in small action arenas. It’s a 3D brawler where characters chain combos of light, heavy, and special ability-based attacks against one another to keep the damage flowing until someone drops dead. You’ll sidestep attacks and press the advantage home with finesse, unleashing powerful special moves like Tanjiro’s Water Breathing or Inosuke’s Beast Breathing – or if you’re not very good at action-brawlers like me you can just mash buttons until your opponent hits the deck.


Honestly, there’s not much more to The Hinokami Chronicles’ combat than unfiltered fun in its most simplistic form. Like the action figure whacking, it’s all very entertaining in the moment, but you’re probably going to forget about it the moment you put your toys down and walk away. There’s admittedly great fun to be had ducking and dodging demonic attacks as Tanjiro and company, and figuring out how to nail the timing of a complex perfect parry adds an extra layer to combat, but there’s not much that jumps out from this action-packed spectacle as a genuinely memorable moment.

“The act of actually playing The Hinokami Chronicles is a bit like whacking action figures around as a kid.”


It’s a little disappointing there aren’t any playable demons in The Hinokami Chronicles at launch. Playing as heroes from rookie Tanjiro to the intimidating Rengoku is no doubt fun, but I found myself looking longingly at the demon that throws around deadly volleyballs at the speed of sound and wishing I could step into their shoes for a bit. In all fairness, The Hinokami Chronicles is actually recruiting a select number of playable demons in the few months following launch, including the manipulative Rui and Mugen Train’s supremely powerful Akaza, but the roster does feel a little barebones right now.


When you’re not fighting, you can recap the story of Demon Slayer in The Hinokami Chronicles by way of an interactive story board. You’ll be presented with one arc on a screen, and you can simply trot from point A to B over the course of a few scenes, watching Tanjiro’s journey unfold while running through locales from Gotouge’s manga recreated as digital playgrounds. There’s the likes of Asakusa, for example, a daunting and bustling cityscape that appears alien to Tanjiro, where you can waltz around and interact with townspeople, and gain a little more backstory on the place itself. These open-ended areas don’t come about too often in The Hinokami Chronicles, but they present a nice little diversion, especially if you want an excuse to revisit the manga you’ve adored reading and anime you’ve loved watching.


It’s also here that Demon Slayer does some unexpectedly great backstory exploration via collectibles. While out scouring the towns and countryside of the saga, you stumble upon shiny pebble-looking items, which turn out to unlock expository scenes, that branch off the main story pathway in each arc, and that you can revisit via the interactive storyboard whenever you please. Collecting a shiny bead in the Wisteria Mountain area might unlock a scene elaborating on the brief Final Selection sequence for Zenitsu, for example, and they’re the perfect excuse to stick around for a little longer in the story mode and just spend some time with our heroes.


But ultimately Demon Slayer -Kimetsu no Yaiba- The Hinokami Chronicles doesn’t really offer a lot outside of watching characters beat the shit out of each other with various flashy moves, but I guess that was always the point. Although the playable roster is feeling the distinct lack of demons right now, there’s a lot to enjoy from the characters who are there, delivering on the promise of a power fantasy of Gotouge’s manga epic. For those steeped in knowledge of that manga (or Ufotable’s anime adaptation), The Hinokami Chronicles offers a great little opportunity to spend some more time with the heroes and stories we’ve loved for years.