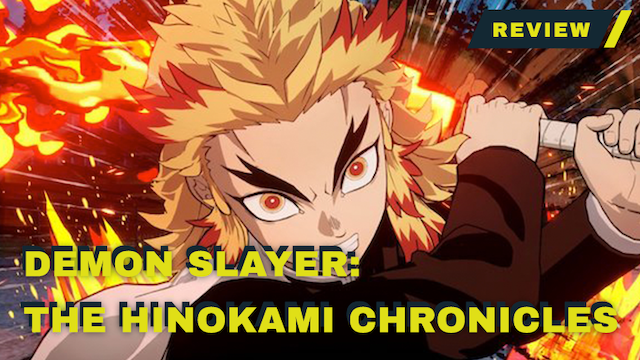 Demon Slayer: The Hinokami Chronicles is the latest licensed title from CyberConnect2 that is based on a highly successful manga. Given the developer’s past success with the Naruto series, it makes sense that it’d apply that formula here. The result is largely a great success, as expected from one of gaming’s most dependable studios, and Demon Slayer‘s own strengths align with what the developer is best at.

As detailed in my preview, CyberConnect2 has really nailed the essence of Demon Slayer with quick sword-based combat that is easy to pick up and play and some remarkable interactive cutscenes. While regular battles can be a bit on the simple side, it’s the boss fights in the story mode that really leave their mark as unique mechanics are introduced that mimic the demon’s abilities. From quick-time event prompts to changing landscapes and avoiding projectiles, these battles bring a lot of variety and are a joy to experience in a playable manner.

While it looks gorgeous in screenshots, Demon Slayer: The Hinokami Chronicles is really a sight to behold in motion. When special attacks are used, the bright colors really pop off the screen and are a real highlight. Demon Slayer has always been praised for its visual design and CyberConnect2 fully lived up to expectations providing one of the most stylish PlayStation 5 titles available and one that will still look great a decade from now.

It also has to be applauded at how well CyberConnect2 manages to tell Demon Slayer‘s story. Switching between playable characters allows for several perspectives to be told and really allows the personalities to shine. For example, controlling Zenitsu Agatsuma in the Tsuzumi Mansion Arc is hilarious as he gets scared at every small movement and moves so slowly. Meanwhile, Inosuke Hashibira is charging head-first into every battle and is sprinting down hallways in the same building. There are some great visual gags and the game nails the storytelling just as much as the action itself.

The story mode isn’t the longest experience, which was always going to be the case considering the game is just adapting roughly a third of the 23-volume manga, so it doesn’t quite compare to the length of the Naruto Shippuden: Ultimate Ninja Storm games that covered hundreds of episodes. However, it does make the most of its time as story beats are given time to breathe, players are able to explore locations, and there are plenty of unlockable to search for. Plus, S-ranking all of the levels (which isn’t all that hard to achieve) will give it some replayability as the Platinum trophy requires acing all the chapters.

Competitive play has never been the strongest suit in past CyberConnect2 titles but it has always been more than passable. Demon Slayer versus matches feel similar to Ultimate Ninja Storm, although the action is a bit more up close and personal with parrying sword strikes and using your ally abilities becoming key if you want to succeed. While the single player mode is the main draw (and you’ll have to complete the story mode if you want to play as your favorite characters in versus), it’s still a fun diversion either locally or online.

Beyond that, there aren’t many modes in Demon Slayer, which is a bit of a bummer. The training mode is more in-depth than one might expect, so make sure not to skip over it as it features 10 missions for each playable character with multiple tasks to complete during them beyond defeating the opponent (such as winning within a time limit or achieving a certain combo). While that does add some replayability, some additional single-player modes (even things such as a survival mode or arcade ladders) would’ve really added a lot to the overall package.

Demon Slayer: The Hinokami Chronicles does the franchise justice and is a strong first console offering. CyberConnect2 has crafted a stylish action game that is fun from start to finish. With free updates planned, this already strong core will only get better as additional content is added.

As ComingSoon’s review policy explains, a score of 8 equates to “Great.” While there are a few minor issues, this score means that the game succeeds at its goal and leaves a memorable impact.

Disclosure: The publisher provided ComingSoon with a PlayStation 5 copy for this Demon Slayer: The Hinokami Chronicles review.