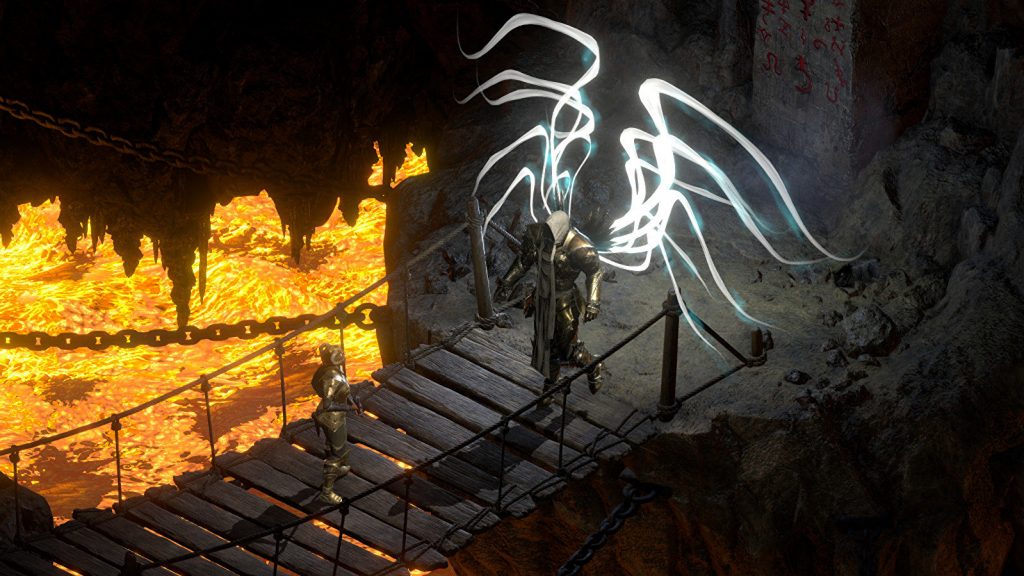 While Diablo II: Resurrected isn’t trying to precisely duplicate the original’s look, the newly-announced remaster is making an impressive effort to match some parts. Watching a panel at BlizzCon today, I was delighted to hear about how they dug up ancient Blizzard assets to recreate and even reuse in the remaster. My favourite titbit: the new Tyrael reuses the angelic wings from the actual 3D model used to create his 2D sprite in the original game.

While the original Diablo 2 is 2D with sprites (created from 3D models), Resurrected is rebuilding the entire game in 3D. During the panel, Blizzardeers explained that they made an effort to gather original concept art, 3D models, code, renders, and such to understand the original intent behind art and better inform the art teams’ creative decisions as they remade parts. I’m a sucker for good archive work.

This led to some nice discoveries like finding the source files for mural textures in the Act II tombs, which they could then reuse for the remade tombs. I admire that technique in remasters – it’s part of why the Resident Evil 4 HD Project mod is so impressive, hunting down the buildings that Capcom had photographed as foundations for textures.

They also followed some of the techniques Blizzard used in the first game. For example, because the original Succubus enemies reused the body mesh of the Assassin (a sensibly efficient game dev practice with a frustratingly controversial public image, thanks to Internet loudmouths), they too reused their new Assassin’s body mesh for their new Succubus.

“The only piece of art we actually reused, 1:1, were Tyrael’s wings,” lead artist Chris Amaral said. “We actually took the Tyrael wings from the old [3DS] Max file and then just repurposed that for ours. We did very little work, very little modernisation of that, we just made it work.”

That’s great, that. I appreciate it both as an artistic technique and for the care given to a character who looked so cool to me 20 years ago. Tyrael’s an armoured lad with wavy tendrils of glowing white energy instead of the traditional feathers, a hell of a look. I spent so long captivated by those wings that he just didn’t look right to me in Diablo III. The single most important art asset in the game, no doubt.

Diablo 2: Resurrected is due to launch later this year, costing £35 on Battle.net. It’ll also be on Switch, PlayStation, and Xbox, and will support cross-platform progression so you can carry the same characters between the lot.

I am wary after the mess of Warcraft 3’s recent remaster but god, I want so bad for this to be good. I adore Diablo 2. It is somewhat comforting that one of the teams involved is Vicarious Visions, who’ve worked on decent remasters including the recent Tony Hawk’s Pro Skater.

As well as announcing D2: Resurrected at BlizzConline today, Blizzard revealed Diablo 4 has brought back the rogue class from the first game.