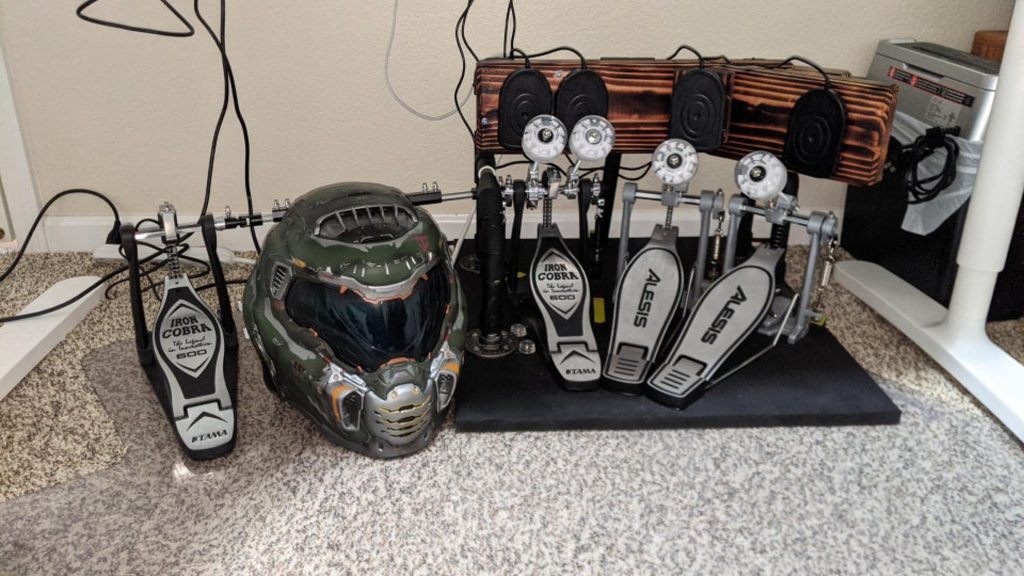 The Doom Eternal soundtrack has plenty of double-bass, but what about using the drums as your controller? One player tried such a thing on the FPS game, and it seems to have worked.

Reddit user TheYuteThatDoot posted about their experiment to incorporate drums into their ripping and tearing this week. They noticed their feet and legs weren’t contributing much to the overall Doom-slaying, and decided to place sensors on their drum pedals and try use them to switch weapons, maximising the efficiency of their rampages. Judging by the video they’ve put together, it seems to have worked.

Four pedals are rigged up so their mallets are each hitting a button corresponding to a different gun in their favoured arsenal. The heavy cannon is the default, on the left foot, and then three heavy-duty, close range pieces of kit, the rocket launcher, super shotgun, and ballista. These four weapons on loop can handle most enemies in the horror game, and a potential fifth for the plasma cannon, meaning two pedals on the left foot, is a possibility for the future.

Some gameplay is shown, and the switches seem to work. TheYuteThatDoots is using a keyboard and mouse alongside the kit, but a controller is feasible, as long as all the required PC hardware is compatible. Another video is on the way, showing the mechanism in action proper. Probably not what composer Mick Gordon imagined when he was laying down the riffs on Doom’s soundtrack, but we’re sure he’d approve.

Both parts of Doom Eternal’s The Ancient Gods DLC are out now, and director Hugo Martin says there’s “more stories to tell.” We have a list of the best new games, if you’d like to try incorporate your musical prowess ino others.