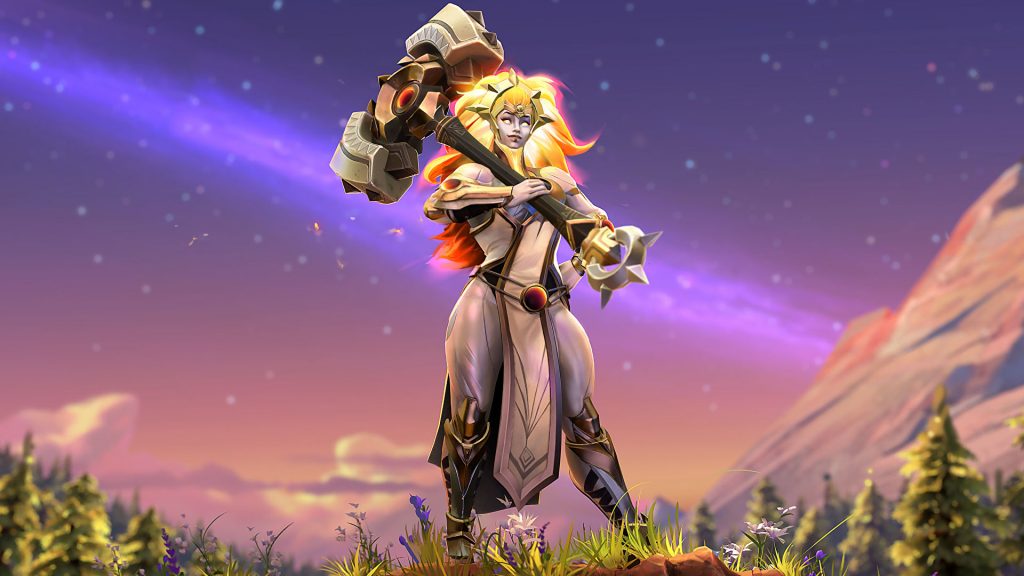 While everyone’s still thirsting over Resident Evil Village’s Lady Dimitrescu and Assassin’s Creed Valhalla’s Olympians, Valve have introduced a giant lady of their own as Dota 2‘s new hero. Dawnbreaker is her name, and clonking enemies with a huge hammer is her game. Personally being too tall to love, I welcome this golden age of Amazons.

Valora, the Dawnbreaker, arrived in Update 7.29 on Friday. Story-wise, she’s a cosmic warrior forged from the heart of a star, who fought against chaos but got duffed up and spent thousands of years drifting in the void before crash-landing on a new planet. For someone who failed her gods and has lost everything she knew, she seems pretty chipper.

Game-wise, she’s a melee strength hero who Valve classify as a tanky carry. She has a stunning spin attack, the ability to throw her hammer and call it back with a fiery trail, and the passive ability for every fourth attack to crit and heal nearby allies. Her Ultimate targets a location near an allied hero anywhere on the map, causing pulses which damage enemies and heal allies then making her fly over to the spot and land with a big stun. Seems kinda Thor-ish, and apparently some game files do refer to her as Valkyrie.

See her hero page for more, and this vid from the fans at DotaCinema for a demonstration:

A big balance pass arrived alongside the new wizard. It tweaked the layout of many trees and paths on the map, changed so very many numbers on skills, talents, and items, reworked lots of Aghanim’s Shard upgrades, outright removed Necromonicon, and more. See the Dawnbreaker update page for full patch notes, or watch people discuss the patch for NINE HOURS if you really want.

Dawnbreaker has She-Ra vibes, which does remind me how weird the tone of the new animated Netflix series is. While Dota does have dark elements in the backstory of its world and wizards, in-game it’s all quite silly and lighthearted. The Dota: Dragon’s Blood series is an edgefest with war crimes and orgies. Doesn’t feel anything like the game I’ve played for thousands of hours. It feels especially weird when you realise the studio who animated Dragon’s Blood also did Kipo And The Age Of Wonderbeasts, a show about post-apocalyptic slavery and genocide which is still friendly, colourful, funny, and warm (though they wrote neither, obvs). I guess Netflix want more edgy fantasy in the vein of their Castelevania. Or maybe it’s meant to capture the harrowing experience of playing Dota with strangers while having voice chat enabled. Dunno. Didn’t like it. How about you, gang?