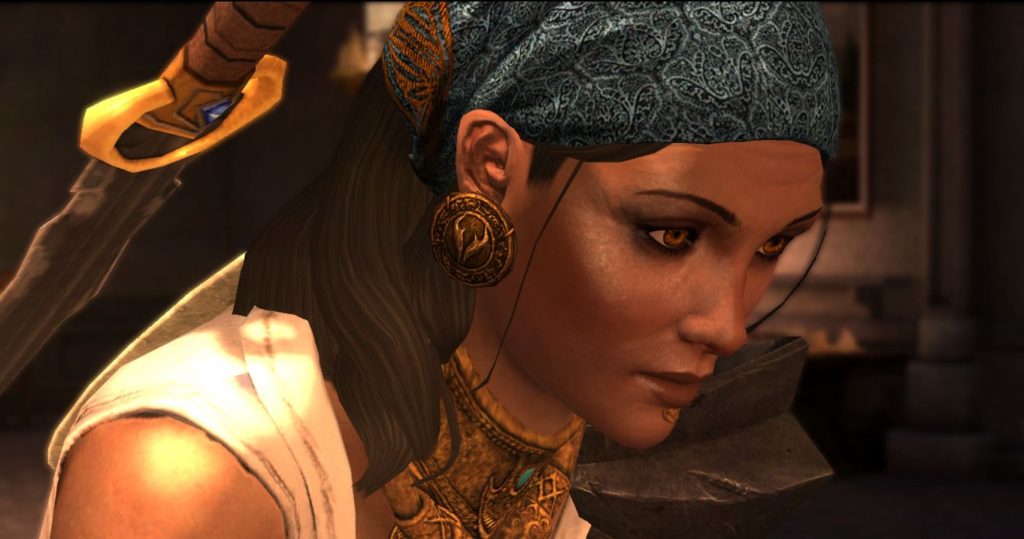 No other character makes as much of an impression as Dragon Age 2’s Isabela beating up bandits and downing a shot of whiskey.

Isabela is not necessarily my favourite Dragon Age companion – that honor would likely go to Dorian, Morrigan, or Merrill. That being said, none of my three favourites make quite as much of a first impression as Thedas’ infamous pirate queen, who, to put it plainly, has the single best introduction in a BioWare game… maybe ever?

Isabela appears as an NPC in Dragon Age: Origins, although she plays a fairly minor role and you can only talk to her if Zevran is in your party. She’s drinking in a bar in Denerim – shocker! – and it’s not really clear whether that particular character was always going to be propelled into a more prominent position in the polarizing follow-up to Origins. Two years later, however, Isabela strutted her way into Dragon Age 2 as a core companion, and just like the previous game, you initially bump into her in a rowdy and raucous bar.

Bar fights have been done to death in games, films, television, books – you get the gist. Threatening to crack someone with a pool cue, Frodo Baggins falling off his chair in The Prancing Pony, hooligan Frodo Baggins getting knocked on his arse for being a journo… We’ve all seen plenty of pub brawls in our time, and so it’s weird that Dragon Age 2’s infamous alcohol-fueled scrap seems to leave the rest for dirt. Honestly, Isabela’s fight with Lucky the loaf-headed loser is a battle for the ages.

In order to meet Isabela, you need to go back to The Hanged Man after the first time you venture there with Varric and the rest of your squad. As soon as you head through the doors, you’ll notice some sort of commotion at the bar – three drunks are giving a pirate in a bandana some trouble, although she seems relatively unphased. After they threaten her one too many times, Isabela pivots, puts them all on their arses, and ends up holding her dagger to Lucky’s throat.

“Tell me Lucky,” she says, knife held to his throat as Isabela looks on nonchalantly. “Is this worth dying for?”

After escorting Lucky around in a semi circle by nudging him with the tip of her blade, the mouthy lowlife loses as Isabela leans back on the bar, knocks back a drink, and laughs. “I didn’t think so.”

You can go over to Isabela and speak to her after this, which is what sets her acquisition quest in motion. But the thing is, like… how could you not? After witnessing a scene as uproarious and well-directed as that, properly choreographed and oozing with character, there’s no way in hell you could turn around and head back out into the streets of Lowtown. The more you get to know Isabela, the more you’ll see that sure, she’s a pirate who likes drinking, lying, and conning people, but she’s also kind when it counts and a person who always tries to see the fun side of things. This intro scene captures all of that by displaying that a) she’s pissed someone off, b) she’s unafraid of them, c) she can prove why she’s unafraid of them, and d) actually it’s all just a laugh and she’s only here to drink and meet new people, aka you, Merrill, Varric, and the rest of the crew.

I’m a huge fan of Dragon Age and I love loads of different BioWare games. I’m not sure I’ve ever seen a single character make such a strong first impression though, even if she’s not my favourite one in the series overall. After seeing Isabela’s intro for the first time in almost ten years earlier this week, I can confidently say that it absolutely holds up – I’m just glad we’re on her side, eh?

Next: Crash Bandicoot: On The Run, Please Stop Making Me Hatch Eggs

Spider-Man: Miles Morales Has Now Outsold The Last Of Us 2