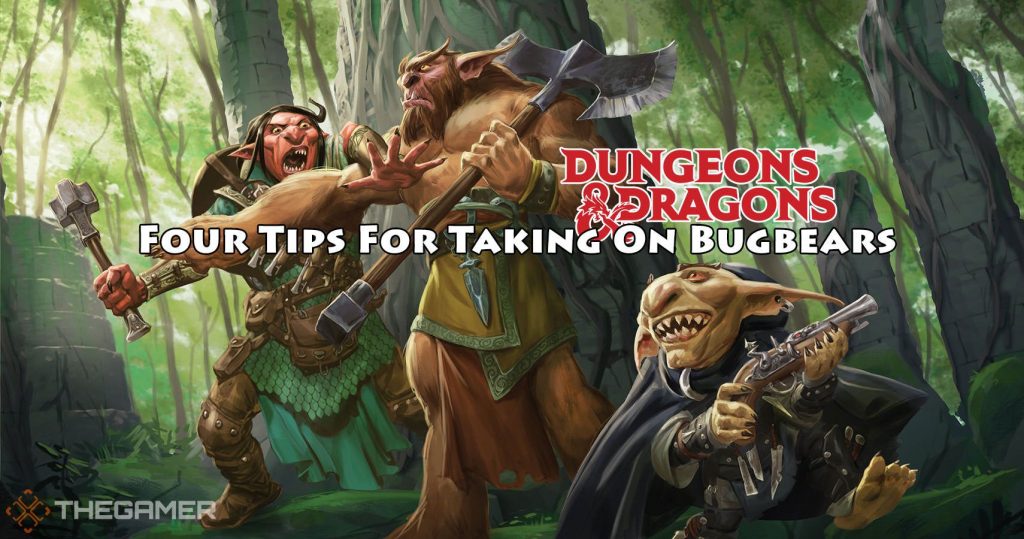 When going up against bugbears in Dungeons & Dragons, there are a few tips that every party should keep in mind.

Hunters, bullies, and raiders, bugbears are formidable enemies to any Dungeons & Dragons party. Unlike other legacy creatures, they haven’t skipped any Dungeons & Dragons edition so far. A single of these giant goblinoids is enough to wipe an entire group of beginner adventurers. Although they look a bit like seven feet tall furry goblins, there are unique characteristics to bugbears. The name comes from their feral appearance. They have the nose and claws that look similar to those of a bear. Bugbears generally hate being told what to do and love terrifying creatures that are weaker than they are.

Like others goblinoids, they are generally evil and usually enjoy being cruel. Bugbears usually enslave goblins, who do not tend to have a choice besides obeying their enormous cousins. Goblins might be used as frontline minions, distraction, and servants. Hobgoblins are not enslaved by them but are frequently threatened and bullied into hiring the bugbears as shock troopers. Although the hobgoblins do not consider their cousins reliable at all, goblinoids, in general, tend to respect the strength of bugbears. Adventurers should always be careful when facing bugbears is a possibility.

4 Watch Out For An Ambush

Bugbears are brutes and raiders, but they are not stupid. Although they might seem just pure-strength hulking warriors, they are surprisingly sneaky. Combine that with the fact that they can see in the dark and you have one of the scariest ambushes in the early levels of Dungeons & Dragons. In fact, they even get extra damage for attacking a surprised enemy, and they are proficient in Stealth. Perhaps staying alert, having an alarm spell prepared, or even bringing along an elf are necessary precautions if a party is trying to hunt down these creatures.

If ambushed by a bugbear and your party is not strong enough, it might be too late. They have a normal intelligence score, which means there are high chances of a bugbear recognizing the weakest target and going for them. Consequently, they might take out a cleric or wizard right off the bat. This only enforces the idea of preparing the right rituals and equipment to avoid surprise attacks at all costs.

3 Be Ready To Deal Damage

Although they inflict high damage and are scary, there is nothing especially worrying about a bugbear that fails to surprise attack the party. Once the combat has started, as long as the cleric and wizard are fine, the fight should not be too hard to win. After the initiative rolls, bugbears go from being this really scary threat that can one-shot any party member to a manageable opponent. Four hits, even from a level 1 party, should be enough to take down this creature.

Make sure that the party sends the most resistant creature to engage the bugbear first in order to keep your support characters safe. Clerics are the best support class in the game, therefore keeping them alive will always pay off. If there is also a rogue in the party, even better. The fighter can go up front to take the high damaging hit while the rogue gets ready for a sneak attack. As long as there is at least one good damaging spell or a rogue, and everybody attacks the same bugbear, it should be fine. The chances of this creature surviving a coordinated attack are really low.

If the attacking bugbear takes down the healer, the party is in big trouble. If the healer is also the one character most fit to engage the enemies at melee range, make sure that the party focuses on keeping that character alive. If a single bugbear is fighting the party, send the tank first to engage them and make the healer stay behind. A bard can do that and use vicious mockery, for instance, remaining useful and ready to heal while being safe.

RELATED: 10 Best Ways For Newcomers To Get Into D&D

If impacted by a slow effect or something similar, bugbears might just throw something at those who they want to kill. They might carry javelins, for instance, so keeping your distance is not a guaranteed way to stay safe if there isn’t a party member capable of going up to the bugbear’s face. That is why it is so important to put someone who can take damage or someone who has a high Armor Class value to prevent a bugbear from moving around.

1 Be Wary Of The Chiefs

If the party is on a higher level, the bugbear threat might come in groups. This will prove to be even harder to survive if they all sneak on the party. Fortunately, higher-level parties also have better resources and, hopefully, better modifiers. It is also possible that a chief bugbear leads a group when they are raiding. If so, make sure to take the leader down first at all costs. Apply the same strategy for dealing with a single bugbear when the party is at a lower level to the chief.

Watch out for what the casters use on the chief, though. Chief bugbears have an advantage when rolling against stun, paralyze, charm, and many other statuses. Pure, massive focused damage is the best way to take one of these enemies down. The party also better do that before the chief starts attacking as they deal more damage than a regular bugbear and attack more often as well. If everything goes wrong, players might want to have some escape spells prepared.

NEXT: Dungeons & Dragons: 10 Best Ways To Start A Campaign


Next
Pokemon: 10 Things You Didn’t Know About Scyther

Once a heavy metal singer, teacher, workforce manager, and an internationalist, Davi has worked in many different fields until he decided to dedicate himself to his passions: videogames & writing. Often controversial, he thinks Dark Souls 2 is the best Souls game and has interesting takes on many things that people tend to dislike.