E3 2021 and the rest of the summer games schedule 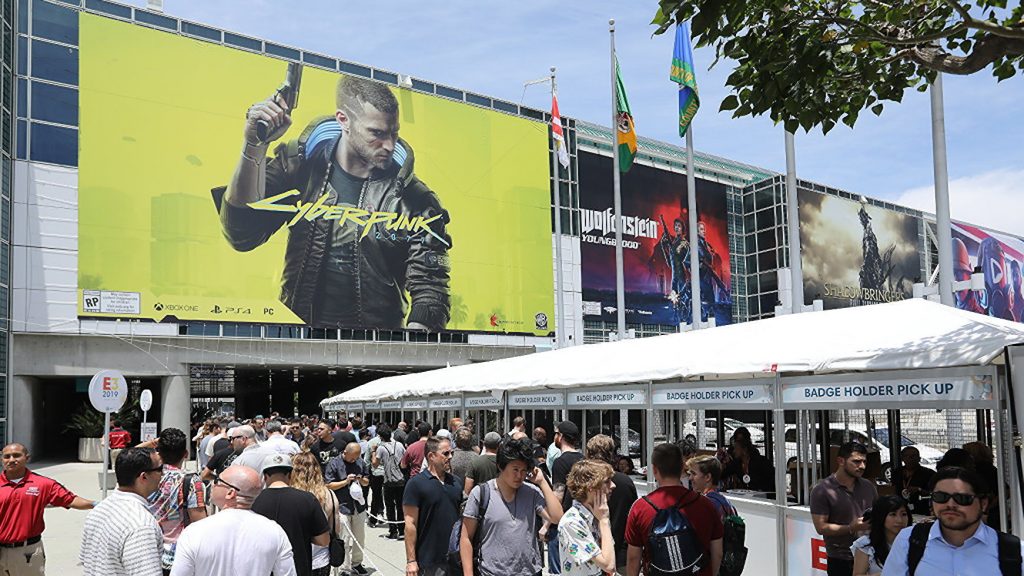 After skipping 2020 due to the pandemic, E3 returns this year as a virtual event. E3 tends to be the anchor for a summer of marketing events blasting announcements and trailers, with loads of publishers and websites and such holding their own showcases around then too. So here’s our handy schedule of what’s on when this summer, from E3 through to Gamescom. We’ll keep updating as more events are announced and detailed.

The Japanese indie games festival returns for a third time to showcase more games, not all from Japan.

Watch on YouTube and Twitch. Also broadcast in Japanese and Chinese. Visit the official site here.

Announcements, trailers, gameplay videos, and such with confirmed games including Sable, Bloodstained: Ritual Of The Night, Chernobylite, and Industria.

Watch on Twitch or visit the official site.

The Playdate is a bizarre handheld console with a crank for controls and a subscription model for games. Not PC gaming but sure, I’ll take a look.

Various leaks have suggested the next Battlefield game will be set in the present or near-future, and this is when we’ll find out what it actually is.

Announcements, trailers, and such from Geoff Keighley (host of The Game Awards) and chums. Weezer, the band from the Windows 95 CD-ROM, will perform a new song from a mysterious video game soundtrack. Sounds like Among Us will reveal more about the next update too. Doubtless Geoff will be teasing more scloosies as the event approaches. And, uh, Geoff Goldblum will be there?

Watch on YouTube. Watch the official site for more info.

Geoff Keighley and Netflix team up to “debut shows and films based on your favorite games!” The streaming service’s gaming lineup includes Cyberpunk 2077, Tomb Raider, Assassin’s Creed, Devil May Cry, Dota 2, League Of Legends, Beyond Good & Evil, Dragon’s Dogma, and Sonic The Hedgehog, plus more are rumoured. That’s an awful lot. No clue what specifically they’re showing here, mind.

Watch on Twitch. See the official website for… no more info?

After skipping last year and being replaced by a raft of events run by publishers and media, the Entertainment Software Association’s marketing bonaza returns. Its role seems diminished, with many of these replacement events still running this year, but E3 is traditionally the banner which the biggest announcements rally around.

More details about the schedule to be revealed, keep watching the website.

Over 75 feel-good indie games will be present for announcements, trailers, and interviews.

Ahead of their big blast, Ubisoft will be talking about news and updates for Trackmania, For Honor, The Crew 2, Brawlhalla, and Watch Dogs: Legion.

Watch on YouTube and Twitch. More info over here.

Ubisoft promise “fan favorites, newly announced titles, and a few surprises, too” for their E3 keynote. Games confirmed include the zombie-busting Rainbow Six game previously known as R6 Quarantine, Far Cry 6, and Riders Republic. They’ll also gab about things coming to R6 Siege and Assassin’s Creed Valhalla. I hope they have Just Dance dancers again this year, socially distanced? And who knows, it might be a year they acknowledge Beyond Good & Evil 2.

The rowdy crowd of indie games have become hella self-indulgent with their E3-y presentations which lampoon marketing while telling a story of corporate power struggles and so much blood. And it’s great. Hoping that’ll continue this year as they announce more games, or whatever it is they’re up to.

The Borderlands gang will do… something? Going by all their tweeting, I’d guess maybe it will involve that there Borderlands movie. But we can never rule out the threat of a sequel to Duke Nukem Forever.

The corporate siblings display their newfound love with a 90-minute showcase of games from “Xbox Game Studios, Bethesda, and many game creators from our partners around the world.” Topics we know they’ll hit include the holiday season lineup and upcoming Game Pass additions. Who knows, maybe they’ll say something about Bethesda’s sci-fi RPG, Starfield. Probably wouldn’t expect The Elder Scrolls 6, though.

Cheery RPS fanzine PC Gamer return with another showcase of announcements, trailers, and chat for PC gaming only.

Squeenix say their E3 keynote will reveal a new game from Eidos-Montréal, the folks behind the Deus Ex and Tomb Raider revivals. Also confirmed to be on the docket are Life Is Strange: True Colours, the remastered Life Is Strange games, details about the Black Panther update for Marvel’s Avengers, and news on Babylon’s Fall, the new game from Bayonetta devs PlatinumGames. You know, I really am about ready for a new Deus Ex – fingers crossed!

GamesRadar return to show off “a mix of indie and AAA titles”.

Watch on YouTube and Twitch. See the announcement for more.

Back 4 Blood is the only WB game specifically mentioned, the new zombie-mashing shooter from the creators of Left 4 Dead. I’d probably also expect more of Suicide Squad: Kill the Justice League, the new bam-bif-pow ’em up from Batman: Arkham devs Rocksteady.

The company who make physical releases of games and soundtracks promise “over 25 exciting announcements about new games, physical editions of cult favorites, and reprints of classic titles”. They mostly focus on consoles but do PC too. See the announcement for more.

The hardware manufacturers promise “a series of innovative hardware built with Razer’s best-in-class technology and design that will continue to raise the bar for PC gaming.” Yeah yeah, but will they announce more gamer gum flavours or telescopic straws or other weirdness?

The owners of 2K, Rockstar, and the Private Divison publishing label have not yet announced quite what they’re doing at their press conference. Take-Two have said 2K were doing a new game with Borderlands devs Gearbox, and that they had other new games coming beyond the usual annual sequels.

God help us, an E3 presentation from people who do blockchain games.

The wee publishing label will have trailers and videos and news and things.

No news yet on what Capcom will have to announce or show at their E3 press conference. I’d maybe guess at new Street Fighter stuff, probably more retro re-releases, maybe news on Resident Evil Village’s unwanted multiplayer mode or even maybe expansions? Ah, dunno.

Sure, Nintendo will only be showing Switch games, but they’re bound to have lots of nice and colourful things to enjoy looking at. And they might have third-party games which are also coming to PC. The stream will be followed by a Nintendo Treehouse Live stream showing gameplay for a few hours too.

The final day of E3 brings a pointless awards show to celebrate marketing, which also promises some “exciting announcements and reveals”.

The Chinese publishers are at E3 for some sort of doodad.

WILL BAMCO FINALLY SHOW ELDEN RING? No idea, cos they haven’t said anything about their E3 presence yet. But we’re long overdue an update on the new game from Dark Souls devs FromSoftware and throne fan George R.R. Martin. But beyond that, they have plenty of other games brewing too.

Running until June 22nd, Valve’s latest virtual festival will bring more demos, live streams hosted by developers, and more. These always have so many more demos than anyone can ever play, so that’ll be fun.

A different form of marketing bonanza. Celebrating the 30th birthday of everyone’s favourite turbo-charged tiggywinkle, the Sonic Symphony Orchestera will perform tunes from across the decades. I hope this includes some of the Sonic Adventure songs with astonishingly daft lyrics.

Windows is the foundation for a lot of PC gaming, so I’ll be interesting to see them reveal “what’s next for Windows”. Presumably this is the update codenamed ‘Sun Valley’, which is rumoured to refresh the user interface, overhaul the garbage Microsoft Store, help improve battery life on laptops, give the ability to uninstall more of the built-in apps, and more. Some folks think they might call it Windows 11, some think it might just be a Windows 10 update. Dunno. We’ll see!

Related to E3? No. Great? Oh yes! Running until July 11th, the speedrunning bonanza will this year blaze through games including Factorio, Dragon Age: Inquisition, blindfolded Trackmania, and GeoGuessr.

See the schedule for all the games.

The French publishers promise gameplay footage, announcements, and such. Games confirmed so far include Blood Bowl 3, Steelrising, The Lord of the Rings: Gollum, Vampire: The Masquerade – Swansong, and Test Drive Unlimited: Solar Crown.

Warframe’s annual fan event is usually when the devs reveal the new hotness.

Not to be confused with the other Farmcon which is for “movers and shakers in the ag sector”, this one is for virtual farmers. The official Farming Simulator fan event will focus on the next game in the series.

After a disappointing event last summer, with only vague teasers for new games, hopefully EA have more to show this time. Presumably we’ll see more of the new Battlefield (due to be announced in June) and maybe the new Dragon Age, Need For Speed, and Skate games they vaguely gestured in the direction of. Plus new announcements, probably?

Id Software’s event became a Bethesda event after they bought Id, though maybe that’ll change now that Microsoft have bought Bethesda? MS and Bethesda are holding a joint showcase in June, after all. Whatever QuakeCon is this year, I assume it’ll have announcements and dev chat. But as they’re skipping an in-person event this year, maybe no Bawls.

Geoff Keighley and chums will have more news and scloosies and trailers and that ahead of Gamescom.

The German games show is all-digital again this year, what with the pandemic and all. It usually brings a load of announcements, trailers, gameplay vids, and the like – a sort of European E3.

Yet to be announced?

Sony have skipped E3 for the past few years, and are skipping it again. However, it seems incredibly likely that they’ll be holding a big blast of their own at some point this summer. And hey, they are actually releasing games for PC these days. Uncharted 4 is expected next.