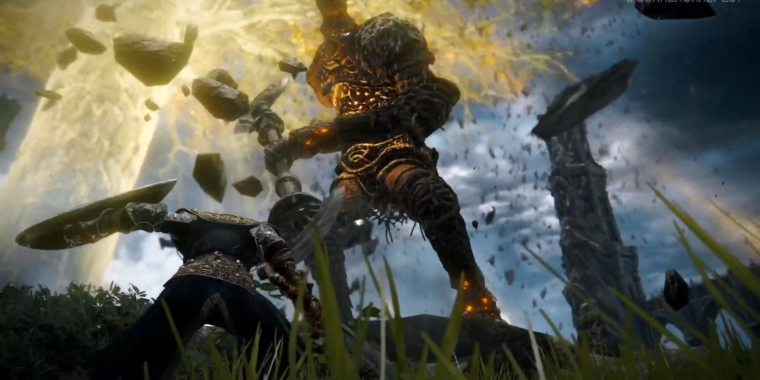 Over two years have passed since From Software first shared a prerendered tease for Elden Ring at Microsoft’s E3 2019 press conference. During a streaming Summer Game Fest event on Thursday, publisher Bandai Namco showed the first gameplay footage from this collaboration between Dark Souls creator Hidetaka Miyazaki and Game of Thrones scribe George R.R. Martin and announced a release date of January 21, 2022, for “next-gen and current-gen” consoles.

The trailer below (and the screenshots above) speak for themselves, and the Dark Souls vibes are apparent throughout. That means a lot of dodge-rolling out of the way of some massive attacks from beasts many times the player’s size, including a prominent dragon. It also means a smörgåsbord of dramatic magical effects, including telekinesis, fire, and thrown stone amid the vaguely medieval setting.

A voiceover gives some hints about the “tarnished” protagonist, who has returned “in search of the Elden Ring, emboldened by the flame of ambition.” The protagonist is shown summoning a ghostly horse and fighting against mounted enemies. At one point, the mount leaps straight up a sheer cliffside. It looks like you can also summon a ghostly companion to fight alongside you to attack from multiple angles.

The Elden Ring reveal capped off a trailer-filled “Summer Game Fest” kick-off event that assaulted us with upcoming games, never-before-seen footage for previously announced games, and new content for games that are already available. Among the highlights (with links to relevant trailers):