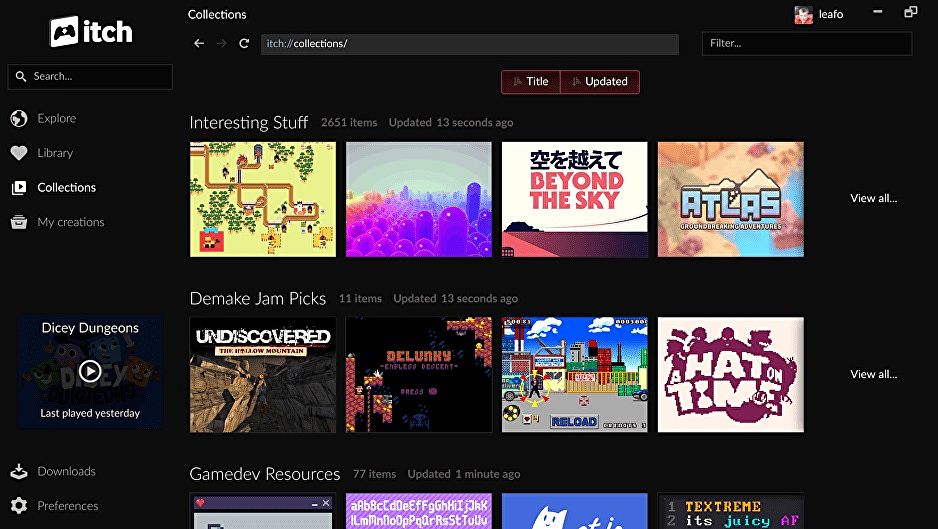 Epic Games are continuing to do strange things that I do not understand. I’m not talking about that whole #FreeFortnite debacle with Apple (though I suppose this could be somewhat related). No, this time it’s about the odd choices of PC apps they’re bringing to their store. Today, they added the Itch.io app, which is another, better, game store that’s technically a competitor? They’ve added a handful of other apps too, and made a new section in the storefront where you can find them all – an app store, if you will.

Itch.io is an indie-focussed store where developers can quickly set up pages to sell their projects. Some games are free, some games are pay-what-you-want, others have set prices which you can pay a little more towards, if you’d like. You can access it in your browser, or through its own launcher. As of today, you can also grab the Itch client from the Epic Games Store’s new app section. While Itch sells DRM-free games, some do offer Steam keys too – so now you can kinda buy Steam games from inside the Epic Games Store.


As odd as it is that Epic have added it, I suppose it is a great thing for Itch. It’s a smaller store with tons of fab indies, and being available via a big storefront like Epic will likely drive more people to check it out. I’m still not sure what’s in it for Epic, but hey, more Itch.io certainly isn’t a bad thing.


This new addition is part of Epic Games’ efforts to add a bunch of apps to their store. It kicked off in December with Spotify, which was also strange. It’d make more sense to me if Spotify had some sort of integration with the Epic launcher, but nope, it’s just the app.


Apps arriving alongside Itch.io today include Brave (an open-source web browser), KenShape (a tool that can turn 2D pixel art into 3D models), Krita (a digital painting app) and iHeart Radio (a radio streaming service – though this one is only available in North America). In a press release, Epic says more apps are on the way in the future, including their own video chat service Houseparty, and the video, voice and text chat app Discord.

It’s not the weirdest of moves from Epic, Steam has some non-game software available too. Epic’s addition of these apps seems another step in their efforts to compete with other digital stores. They’ve already spent hundreds of millions of dollars on exclusives, but their client still lacks many features found in Steam, and they’re still playing catch up.


Whatever Epic are up to, this might at least spur you on to check out Itch.io if you haven’t already. Last week, Alice Bee discovered three free Pico-8 games with excellent titles on the indie-focused store, such Go Fast Deliver Things and Sneaky Stealy. Very nice names indeed.