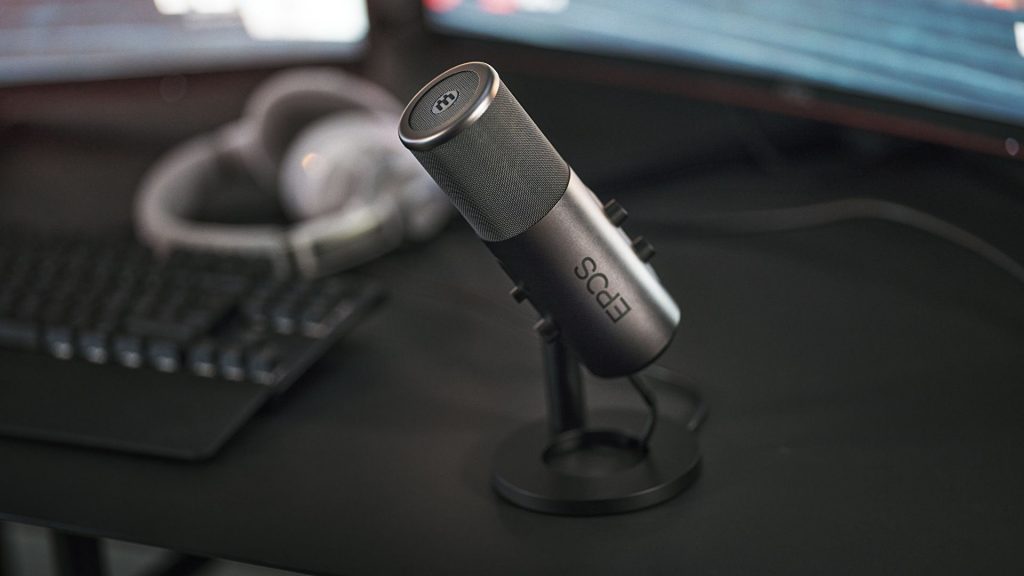 EPOS, the company that used to be Sennheiser’s gaming headset division, have announced their first USB microphone, the B20. Priced at £179 / $199, the B20 is a broadcast quality USB mic that’s been designed primarily with streamers in mind, although you could probably also use it for any budding podcast projects you’ve got in your backpocket thanks to its four different pick-up patterns.

Those pick-up patterns include cardiod (for when you’re sitting alone directly in front of the mic), omnidirectional (which picks up sound equally from all directions, like when you’re on a conference call, say), stereo (which uses the left and right channels for different sound sources) and bidirectional (which uses the front and back of the mic for interview-style situations) – just like your typical Blue Yeti USB mic. As such, you should have plenty of recording options depending on what you want to use it for.

The B20’s aluminium chassis also has integrated volume, gain and mute buttons for easy, on-the-fly adjustments, and there’s even a nifty LED light to tell you when it’s muted, and you’ll find a built-in headphone jack on the base of the mic so you can monitor your voice and game audio in real-time. EPOS say it can also be easily removed from its stand to attach to standard 3/8in boom arm mounts, giving you plenty of flexibility to position it just how you like (though you will have to buy the boom arm separately, of course, as it only comes with a desk stand in the box).

Despite being a plug-in and play microphone, the B20 is also compatible with EPOS’ Gaming Suite software, which lets you do even more stuff with it. This includes customising your recording and playback equaliser settings, such as your gain, noise gate levels and reverb, and being able to toggle between 7.1 surround sound and 2.0 stereo when you have an EPOS headset connected.

I’ll be putting the B20 through its paces shortly, but on paper the much cheaper Blue Yeti will get you a very similar set of features for a heck of a lot less. Indeed, with its launch price set at £179 / $199, the B20 is quite a bit more expensive than your Blue Yeti and its fancier Blue Yeti X sibling, so its audio quality is going to have to be pretty darn excellent to make it stand out from the crowd. Still, EPOS haven’t disappointed yet with their excellent H3 gaming headset and their handy GTW 270 Hybrid buds, so here’s hoping the B20 is equally up to snuff. Watch this space.