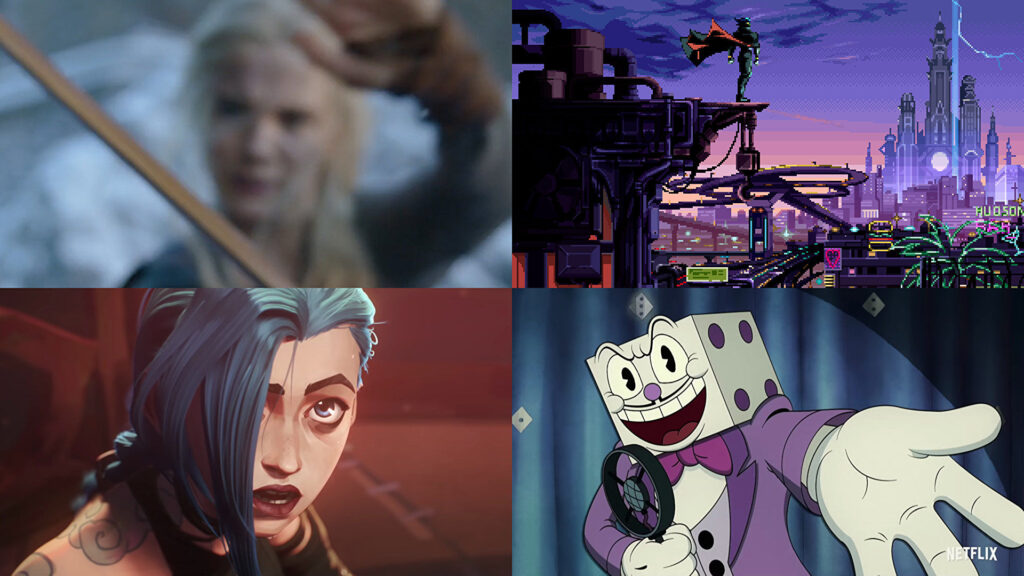 Netflix are hot for video games lately, with their number of animated and live-action adaptations now into double digits. Their E3 stream today brought news of even more, including announcements of a Far Cry: Blood Dragon cartoon and casting for their live-action Resident Evil. It has Lance Reddick! But by and large, their stream was a weird shrug with so little information that all they had on one show was a logo. But hey, here’s what they had on Cuphead, Castlevania, Splinter Cell, League Of Legends, and others.

It was a strange stream. You would expect the company behind all these shows to know what was going on and be able to give information or show something or… anything. I know Netflix face the risk of subscribers losing interest and cancelling, especially during the lull after many productions were halted during the pandemic, so maybe they wanted to just throw announcements out there. But then they didn’t mention several other series they’re doing nor their rumoured plans to make games, so I have no idea what the threshold for notability is. The presenters brought good energy (Rahul Kohli is great!) but the material Netflix gave them was essentially an internal company newsletter. Weird. Let’s crack on.

I do not like League Of Legends but ooh I do like the style of this animated series in a new two-minute clip. I was not expecting this from a game as ugly as League. The series hits Netflix in autumn.

It is still weird to me that a game based on old cartoons is spawning a cartoon itself, but here we are. Netflix announced that Wayne Brady (off Whose Line Is It Anyway?) will voice the dastardly King Dice, and showed a wee video:

While Trevor Belmont’s monster-hunting adventures recently ended with season four, Netflix have more Castlevania coming. They announced an “all-new” spin-off series set in France in 1792, during the French Revolution. It focuses on Richter Belmont, a descendent of of Trevor and Sypha, as well as Maria Renard.

An animated adaptation of Ubisoft’s stealth series has been rumoured since last year, and Netflix today confirmed: yes. It’s being written by Derek Kolstad, the writer of John Wick. They showed one picture and that’s your lot.

A cartoon series inspired by the kooky Far Cry 3 spin-off Blood Dragon is coming from Adi Shankar. He was a producer on Castlevania and was supposedly doing Devil May Cry for Netflix too. He’s also behind the ‘Bootleg Universe’ series of ha-ha-hilariously edgy short films like Power Rangers with sex and guns and Mr. Rogers with guns and Pokémon if Pikachu died and oh good grief. Possibly the perfect person for Blood Dragon. So very much more on that in the stream.

The MOBA is adding several skins based on Stranger Things characters (having previously done this with Avatar: The Last Airbender) and they look a little something like this:

While Netflix’s live-action series is based on the original books, not the games, ah c’mon the popularity of the games obviously influenced their decision. Today Netflix showed a teaser video for the second season and announced WitcherCon, a joint online fan event in July with Witcher game devs CD Projekt Red. But no, CDPR are quite clear, they will not announce a new Witcher game then.

Netflix announced the main cast for their live-action Resident Evil series (one of several RE projects) and whoa, Albert Wesker is played by Lance Reddick (Daniels on The Wire, Zavala in Destiny 2). Lance Reddick is excellent.

After all that vagueness, the show teased a possible future stream by reeling off game adaptations they’d skipped: Pokémon, Sonic, The Division, Dragon’s Lair, Cyberpunk, Assassin’s Creed, and Dota. Hopefully they’ll wait until they have more to show than a logo? Weird. Just weird.

You can watch the entire stream below but I warn you: it’s vague.