Everything You Need To Know About La Signora 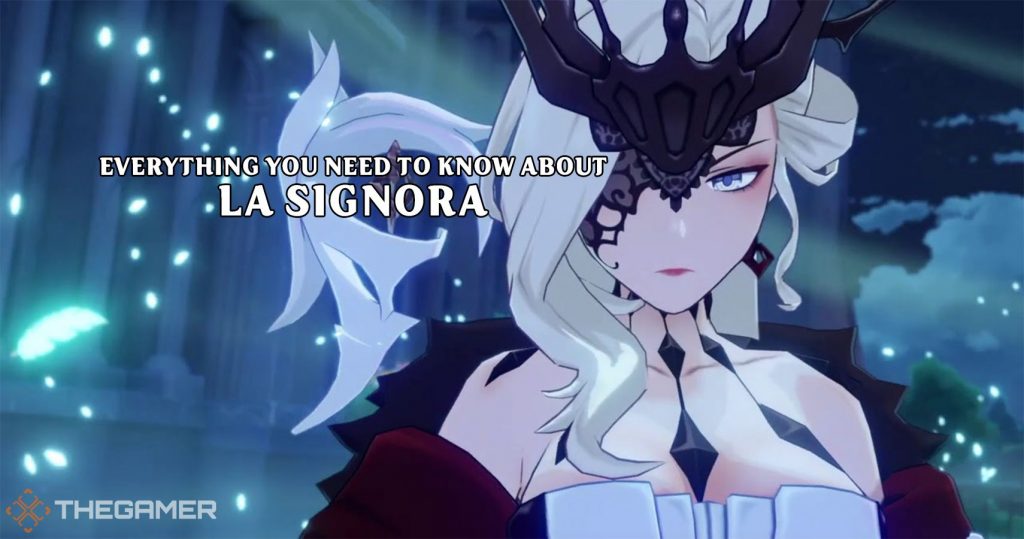 Out of all the expected upcoming characters in Genshin Impact, La Signora ranks high among anyone’s tier list. Yet, her existence is a bittersweet reward in the game since she’s not playable— yet. There is hope though, since, if all of us fictional character fans clamor in a collective cry of longing, the developers might just release a playable version of her, albeit prematurely.

Of course, don’t count on that happening too soon; just know that there’s a big chance of it happening in the near future. Regardless, information about La Signora is scarce and she remains as enigmatic as ever. That’s can be an issue, especially with the allure of more immediate characters taking a spot in your heart. So, make sure to reserve a place for La Signora by getting to know her better before she gets released.

If it wasn’t clear already where she came from, La Signora hails from the cold lands of Snezhnaya. It’s Teyvat’s fictional analog for Russia; because, like Russia, snow with a dash of subzero temperatures is part of the staple in Snezhnaya.

Like Signora, Snezhnaya is also most likely going to be a playable aspect of the game. It’s just that it will perhaps take several more months or even years before it becomes available. Still, Snezhnaya’s influence both in Teyvat and Liyue is undeniable and oftentimes invasive.

9 She Works For The Cryo Archon

The game doesn’t even need to point out that the main thematic element of Snezhnaya is cryo. Most of the Vision-users there are ice-cold killers. La Signora is no exception and has shown that she could have easily killed Venti.

Why did she need to do that? Because apparently, the Cryo Archon in Snezhnaya wants Venti’s source of godly powers or his Gnosis. To that end, La Signora works as a Fatui Harbinger for Tsaritsa or the Cryo Archon as one of her elite and most favored.

8 Her Vision Is Also Cryo

Some fans have even speculated that the Tsaritsa herself is La Signora in disguise because it seems La Signora’s Vision is cryo. However, that is unlikely, since Venti would have recognized her right away. As she is, La Signora is just known as the 8th Fatui Harbinger.

As far as her cryo capabilities are concerned, she has shown that she can create a freezing field that can root enemies in place — even something as powerful as an anemo archon. Her Vision amulet seems hidden, but will possibly appear once she has a playable model.

As for her weapon of choice, La Signora favors the catalyst, making her a spellcaster-type character since that’s what most catalyst-users are in the game. That could also mean that she’s a glass-cannon with lower HP than usual, compared to claymore or polearm users.

It’s also not clear whether she has a quirky playstyle that’s similar to Childe or if that ability is normal among Fatui Harbingers. All in all, La Signora is looking more and more like a cryo version of Ningguang from Liyue except she’s likely going to be a 5-star character.

Speaking of Childe, one thing that sets him apart from all the other available Vision-users in the game is that he has a Delusion or a counterfeit Vision. This allows him to transform into a more powerful version of himself, as seen in his boss fight.

Now, since the Tsaritsa has presumably granted Delusions to all her Fatui Harbingers, La Signora should have one as well. That could mean her having an NPC version boss that also transforms although her playable version might lack that Delusion powers, just as with Childe.

5 Her Mission Is To Collect All The Seven Gnosis

So why is La Signora in Liyue and Mondstadt? What does the Tsaritsa want her to do there?

La Signora is walking around Liyue and Mondstadt at the Tsaritsa’s behest to collect all the six other Gnosis from the Archons. It hasn’t been revealed yet what the Tsaritsa’s plans are regarding the Gnosis, but seeing as Zhongli willingly gave his up, then it might not be that villainous.

4 She currently Has Three Gnosis

So how has La Signora progressed so far with what her Tsaritsa wants? She’s doing splendidly at the moment. She currently has three Gnosis out of seven. The Cryo Gnosis was free since the Tsaritsa can willingly hand it to her for safekeeping.

The other two are the Anemo and Geo Gnosis, the former of which she had to take by force. Whatever the case, both the Fatui Harbingers and the Tsaritsa have some big plans for the Gnosis or an endgame against a bigger looming threat over Teyvat. At least, that’s according to some theories.

3 She’s The Strongest Of The Fatui Harbingers

As for why the Tsaritsa places her full trust in La Signora, it’s because she’s the most powerful out of all the Fatui Harbingers. That’s why she was also chosen to carry all the Gnosis from the washed-up or defeated Archons.

RELATED: Genshin Impact: 10 Most Important Characters To Have In The Current META

This status among the eleven Fatui Harbingers isn’t easy to attain, which makes La Signora one-of-a-kind among all the Vision users; she’s possibly the second strongest in the game after Zhongli.

2 She’s Rude To Other Harbingers

So far only five of the Fatui Harbingers have been revealed and only three of them have been shown in the game. Even so, all other Fatui Harbingers aren’t too warm with La Signora. That’s because she’s generally regarded as harshly honest and has a superiority complex.

Even Childe himself doesn’t agree with La Signora’s methods despite their strategic liaison. Other members of the Fatui Harbingers are also not spared Signora’s domineering and sanctimonious gaze. It’s easy to see her as a villain due to her actions and speech.

1 She’s Probably Not A Villain

Even as she acts as the perfect villain, there’s probably going to be a story for Signora that will melt her icy walls. After all, Zhongli didn’t have a problem surrendering his Gnosis to her, meaning he understands the Tsaritsa’s plan.

Signora was also less destructive or abrasive in Liyue, meaning she probably only has a beef with Venti or the Tsaritsa has bad blood with the Anemo Archon. Suffice to say, there are bigger and more sinister threats in Teyvat and La Signora isn’t one of them.

NEXT: Genshin Impact: 7 KFC Collaboration Memes You Need To See

Sid was born, did some stuff, then decided to become a writer.

He finds respite in the sweet embrace of mass media escapism after having risked his life too many times as a journalist covering warzones and depressed areas. Nowadays he mostly risks his bladder as he tries to hold his urine waiting for those precious post-credits scenes at the movies or trying to kill Souls-like bosses. So far it’s going well. Probably.