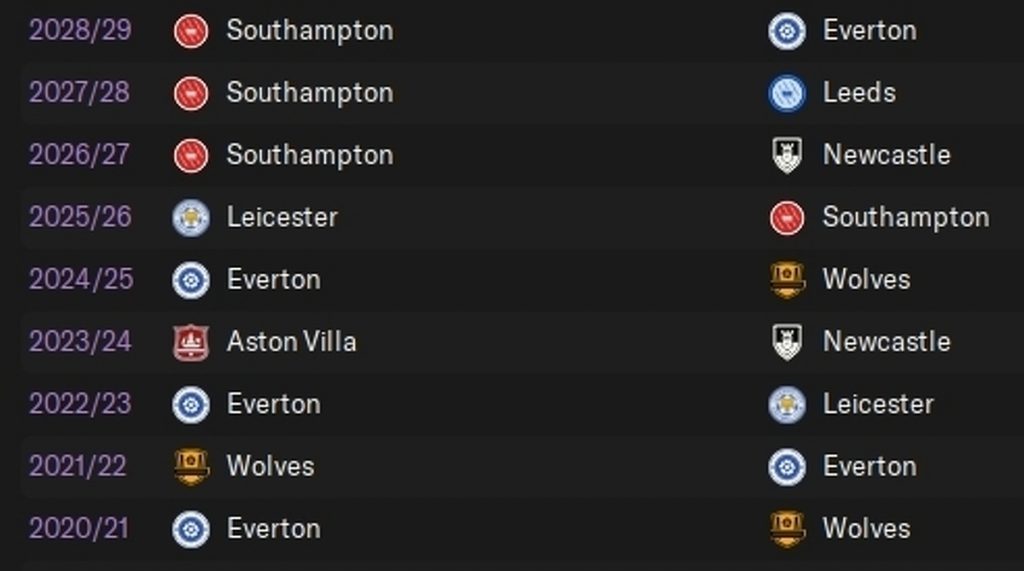 The European Super League seems dead – for now, at least. But that didn’t stop one Football Manager 2021 player from using the game to simulate how football might have played out over the next 25 years without the founder clubs in their leagues.

When the Super League was announced, Uefa threatened to ban the founder clubs from all existing competitions – including domestic leagues.

If the Super League had launched as planned, and Uefa had followed through on its threat, Manchester United, Manchester City, Liverpool, Chelsea, Arsenal and Spurs would have been booted out of the Premier League.

Real Madrid, Barcelona and Atletico Madrid would have been kicked out of the Spanish league, and Juventus, AC Milan and Inter Milan would have been banned from of Serie A.

Inspired by the prospect, Redditor FlyingPingoo manually removed these clubs from their leagues for the remainder of the 2020/21 season, and then “holidayed” for the next 25 years.

A “holiday” in Football Manager is when a human player lets the computer take control of their duties for a set period of time. In this case, a quarter of a century.

When a manager is on holiday, their assistant manager/coach takes over as manager. Players use holiday mode for testing games because you can let the game progress through several seasons much more quickly than if you played them.

FlyingPingoo moved the Premier League’s “big six” to semi-pro leagues, promoted throughout the football pyramid to fill in the gaps, and then “financially and fan-nancially crippled them so they have no chance to recover”. It’s what they deserve, after all.

The players of the founder clubs became free agents, which meant other clubs were able to snatch them up. PSG, for example, signed Liverpool’s Virgil van Dijk and Joël Matip, Spurs striker Harry Kane, and Manchester United full-back Aaron Wan-Bissaka.

In FlyingPingoo’s simulation, and without the “big six” stinking up the place, Everton win the 2020/21 Premier League title (I’d have thought Leicester would win it!). Everton go on to win the league another two times over the course of the next five years before Southampton take control. The south coast club win the title an incredible 15 times from 2027 to 2045. Talk about dominance!

Alas, the legendary Paunovic was sacked the year Southampton finished fifth – after finishing in the top two 19 times out of 22 seasons. Talk about brutal!

“As an F1 fan, this is worse than Lewis Hamilton winning all the time,” FlyingPingoo said of Saints’ dominance over the league.

Sprinkled in there are titles from Leicester, Leeds, Villa and Wolves. In the final “holidayed” season, the mighty Norwich, currently residing in the Championship, win the Premier League.

“Crazily Mike Ashley left in June 2021 taken over by a consortium led by a ‘Nacho Legido’ [chairman] for 12 years,” FlyingPingoo revealed. “The ones taking over after that have been around for 20 years and counting.”

Remember, FlyingPingoo deleted all the Super League founder clubs from their leagues. That meant Barcelona star Lionel Messi ended up moving to Chinese team Shandong, before arriving at PSG. “After he retired,” FlyingPingoo said, “he became a first team coach of Cadiz and then Huesca earning 6000 euro/week.”

If you’re wondering how the Champions League played out, here are the results:

This is all a bit of fun, of course. The Super League seems to have failed before it even got started (check out Chris Tapsell’s wonderful piece on what the people behind the Super League should in fact learn from video games). No doubt the “big six” will continue to dominate the Premier League for years to come.

If you want to give this kind of game on Football Manager 2021 a shot, there are a raft of Steam Workshops that do the trick. stevemurphy1’s Workshop “Not So Super League (ESL Clubs Nuked)” comes recommended.