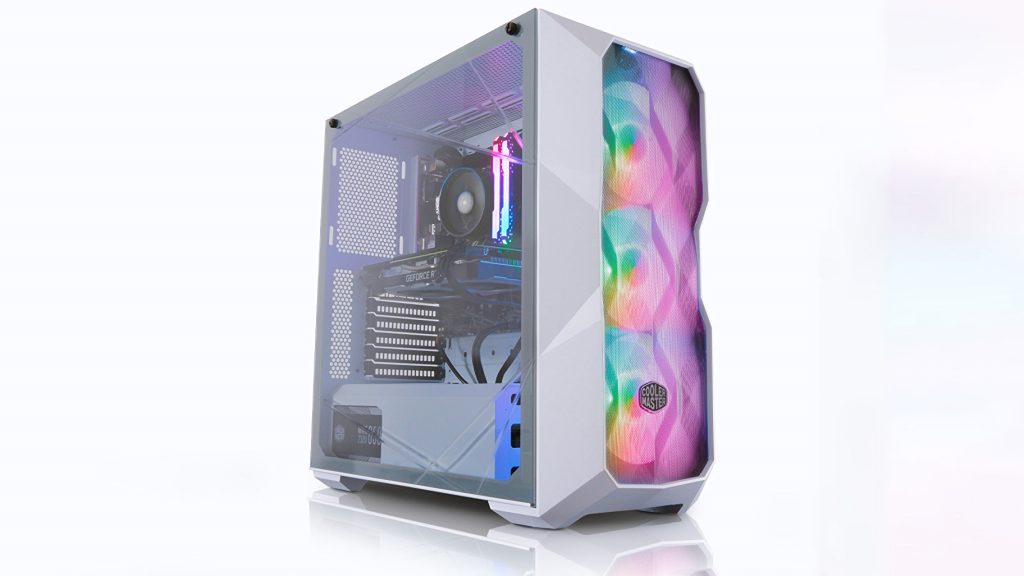 Building your own PC is normally a great experience – you get to learn about how computers come together, you can choose just the components you want and save some money in the process. Right now though, the situation’s flipped: in-demand parts like graphics cards and power supplies are only available at massively inflated prices, while prebuilt desktop PCs can offer considerably better value. So it is with this £949 RTX 3060 and Ryzen 5600X desktop made by UK system builders AWD-IT, which offers the very latest components at a lower price than building your own.


Whenever I see a potentially good prebuilt gaming PC, I always put the parts into the fantastically useful PCPartPicker website to see how much it would cost me to make the same computer myself. Adding in the Ryzen 5 5600X processor, MSI B550 motherboard, 16GB of RAM, 240GB SSD, white CM case and 550W power supply, the site reckons you’d be looking at an outlay of around £636 – and that’s without the RTX 3060 graphics card, the single most expensive component. We have £314 left in our “budget” to pay for the GPU, so the question is this: can we actually buy an RTX 3060 for that price?


In theory, the answer should be yes – the 3060’s RRP begins at around £300 in the UK, so we should be able to build this system for the same price as buying it preassembled. But due to the massive demand for graphics cards right now, RTX 3060 cards are actually selling for hundreds of pounds more, sometimes doubling the RRP. So in that context, paying only £314 to get an RTX 3060 in our system is an unexpected bargain – especially when it’s a well-respected EVGA 3060 XC model, as this one is.


This calculation doesn’t even take into account the cost of Windows 10, which would normally cost between £30 and £120 for a legitimate copy, nor the assembly of the computer and the three year warranty that AWD-IT offer as part of the purchase price. With these factors considered, the £949 asking price becomes very reasonable indeed.


Of course, you may well prefer a slightly different case, more RAM, more storage and so on. Happily, there are no outright poor choices here – the motherboard, power supply and case are all made by major brands and could be bought off the shelf, so you won’t run into any issues upgrading down the line – but everyone’s preferences and needs will be different. You can actually make these alterations before ordering on the AWD-IT site, if you prefer, but I would recommend checking prices online for the bare components first. Installing a new SSD or a couple extra sticks of RAM takes only a few minutes even for novice PC builders, and allows you to buy components at their sale prices. (Theoretically, you could also just take out the graphics card and processor and assemble a whole different computer, selling on the components you don’t want, if you can be bothered.)


Whichever way you choose to go though, I reckon this £949 Ryzen 5600X and RTX 3060 PC represents an excellent value. And while the RTX 3060 falls behind other (equally impossible to find) RTX 30-series cards, like the 3060 Ti and 3070, Katharine’s benchmarks have shown that it still performs well, often providing double the frame-rate of the legendarily-good-at-the-time GTX 1060 or GTX 970 cards. That means this PC ought to provide a super noticeable performance uptick for anyone on that era of hardware.

If this post was useful to you or you have thoughts of your own on system building in 2021, do share them in the comments below – it’s always interesting to hear a fresh perspective.