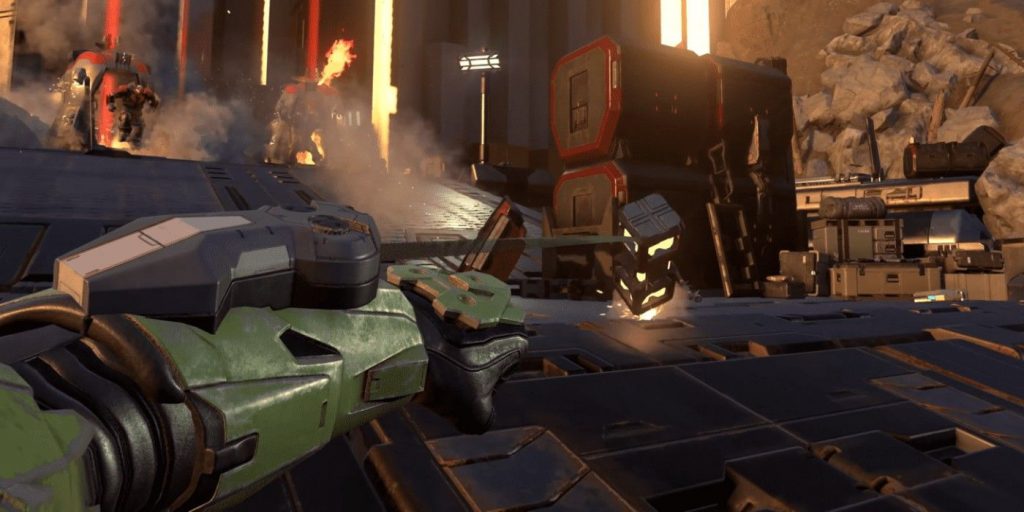 There’s a new grappling hook mechanic in Halo Infinite, and it sounds like it’s going to be a huge change for both single-player and multiplayer.

343 Industries has been plugging away at Halo Infinite behind closed doors for a while now. Between the pseudo-open world single-player and the likely ambitious multiplayer, a lot of work has been going into making Infinite the best it can be. 343’s monthly updates have been keeping fans informed about various aspects of the game’s development, and are likely leading up to a big news release at Microsoft’s E3 conference. However, one of the biggest changes to the whole game may be coming in the form of something that was already shown to players: the grapple shot from the gameplay reveal trailer.

Introducing a grappling mechanic into a video game can have a wide variety of effects. Not much at all can happen if it’s particularly limited in its physics and targets. Alternatively, it can be so overwhelmingly strong that an out-of-bounds trick is always moments away. According to a recent leak, Halo Infinite is erring on the strong side; purportedly, in current development builds, players can grapple anywhere, anything, and anyone. This will undoubtedly have rippling effects throughout the game’s balance and design if it stays in the game, and it could be the shake-up Halo Infinite needs.

RELATED: Halo Infinite: The Case For and Against a Battle Royale Mode

Hooked On A Spartan

A Reddit leaker, who claimed to be a European QA tester working on Halo Infinite’s multiplayer, had a number of things to say about features coming to the game. In particular, The Pit and a battle pass system will be present. However, the most notable revelation contained in this leak was that the campaign’s new grapple shot will also be a core feature in multiplayer. And it’s squarely at Infinite’s core, perhaps to the detriment of old strategies; not only can players grapple around the environment, but they can also hook basically anything. This includes pulling weapons, flags, and even other players toward them at a moment’s notice.

The implications of this are astounding. Now, not only are a potentially large number of players navigating through maps by walking, running, using different vehicles, and perhaps using speed power-ups or boost pads, but also by grappling everywhere and everything. Interactable objects will be flying everywhere during matches, with sneaky melee strikes suddenly gaining a much larger range and Capture the Flag turning into more of a literal tug-of-war than ever before. Set beside footage of other Halo games, Infinite will be easy to pick out due to its ever-present grapple shots and constantly moving players. The chaos could be palpable, but it will definitely turn some heads in the process.

This is not the first time a radically new game mechanic was introduced into the sacred Halo formula. The first time was actually invented by Bungie itself, and took the form of the Armor Abilities in Halo Reach. These special abilities took the form of different powers and special items that players could use on a cooldown. These special abilities defined Halo Reach and Halo 4’s multiplayer, with players being able to enter matches with them equipped as part of different loadouts. Although they were interesting to play with, some players were concerned that they changed the core of Halo too much, and unbalanced the previously even playing field of a bunch of identical characters scavenging for weapons during combat.

343 Industries took those concerns to heart while designing Spartan abilities in Halo 5: Guardians. Now, several abilities that were tied to Armor Abilities were made into universal game mechanics available at all times. These were also combined with new chain-able movement options, like ground slams, sliding, and clambering up ledges. These were, again, somewhat controversial due to changing the grounded, deliberate shooter Halo used to be, but were generally well-received by FPS fans looking for new techniques to master. The grapple shot appears to be another Spartan ability in this vein, used for moving around and interacting with the environment in a fast and interesting way. If this rumored mechanic is indeed in Halo Infinite, it will be fascinating to watch the competitive community tear into it like they have with previous Halo titles.

Halo Infinite will launch in late 2021 for PC, Xbox One, and Xbox Series X.

MORE: How Halo Has Defined the Shooter Genre