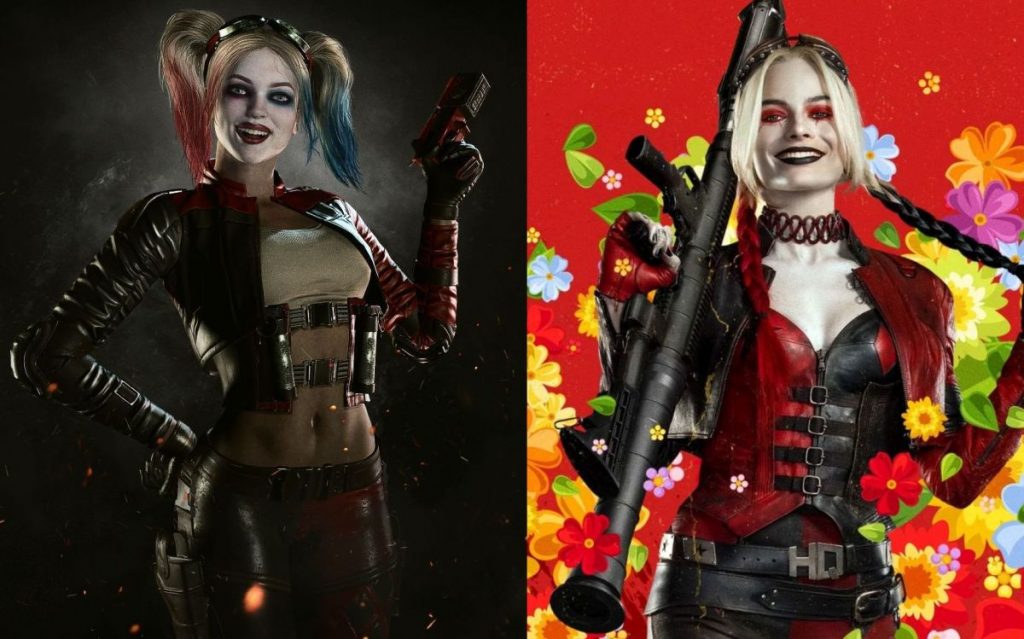 James Gunn, director of The Suicide Squad (as well as the Guardians of the Galaxy movies, Super, and Slither), recently shared some concept art for Harley Quinn’s outfits in the movie. As well as two versions of her pageant dress, there’s an early concept for the red-and-black uniform Margot Robbie wears as Quinn during the movie’s opening Corto Maltese beach sequence (and in most of the movie’s marketing).

“The beach uniform was inspired by her outfit in the Injustice 2 video game”, Gunn wrote, to which the game’s creative director and team lead Ed Boon replied, “Thanks for the shout out.”

After debuting in Batman: The Animated Series in 1992, Harley Quinn made the jump to comics and subsequently videogames and movies, becoming more independent of her origin as the Joker’s perky minion/girlfriend and losing her harlequin costume in favor of multiple outfits of varying ridiculousness. The alternate DC universe of the Injustice games cast Quinn as a member of the Insurgency, fighting a regime led by an evil version of Superman, and gave her a red-and-black uniform like the one she wears, albeit briefly, in The Suicide Squad.

The GeForce Now database leak included a listing for Injustice 3: Gods Will Fall, and though Nvidia declared it was a list of purely “speculative” games, rumours of a third Injustice have nevertheless been doing the rounds. One includes a list of characters, including John Constantine, Metallo, Red Tornado, and Nekron alongside returning characters like Harley Quinn, with He-Man as DLC. The leak claims it will be announced at The Game Awards, with a May 2022 release date.