Have You Played… Welcome To Elk? 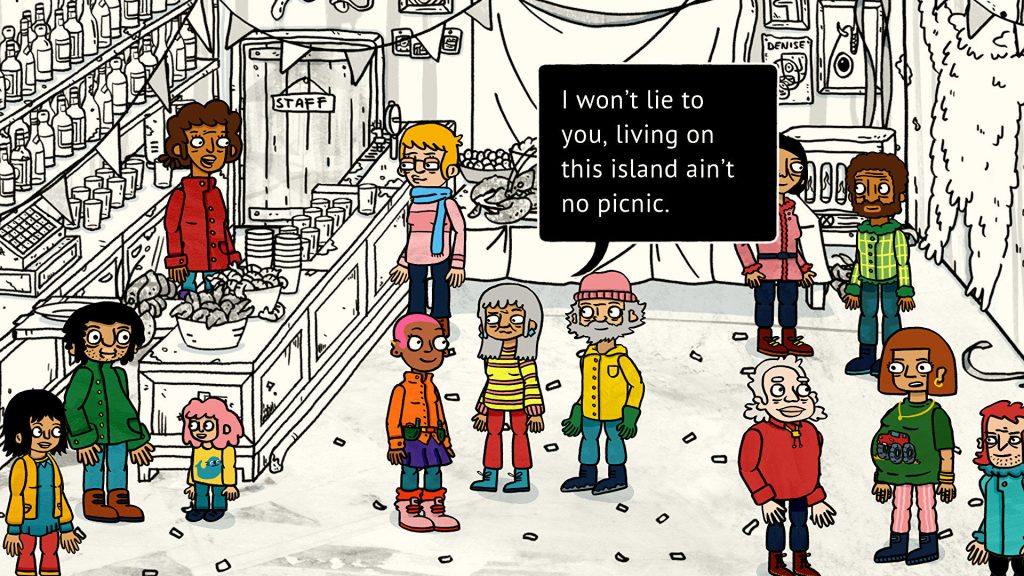 Have You Played? is an endless stream of game retrospectives. One a day, every day, perhaps for all time…

At first glance, Welcome To Elk looks like the bright and breezy cousin of Die Gut Fabrik’s alien soap opera Mutazione. Both feature young women travelling to a new island community for the first time, and while Elk swaps Mutazione’s balmy tropical forests for the frozen hunts of a small Arctic fishing village, each game plays out in a very similar fashion.

You spend a lot of time getting to know the locals, and every now and again you’ll play a small, reasonably inconsequential mini-game to advance the story. But beneath Welcome To Elk’s cheery cartoon exterior lies a tale of surprising depth and human tragedy, as the tales you hear and the people you meet aren’t just made-up creations of developer Triple Topping. They’re all people and events that are based in fact and have happened in real-life, and the resulting story is as affecting as it is disarming.

Frigg travels to Elk with the hope of becoming a famous carpenter’s apprentice, but she quickly gets pulled into helping her neighbours solve all sorts of problems. People disappear, animals get sick, thugs start terrorising the local bar, and at one point someone even gets lightly trampled by one of the island’s titular mammals. Fortunately, the latter isn’t a fatal injury, but the ensuing mini-game of sewing up their bleeding head did put me dangerously close to losing my lunch.

Thankfully, most of the other mini-games in Welcome To Elk are considerably less gory. By the time you reach the end credits, you’ll have pulled some pints, made up your own melodies in karaoke, stuck some paper eyes, noses and mouths on balloons, and played a very addictive card game. I’m not even kidding, I’d happily play an entire game that was just round after round of Gelt Stack if I’m being honest.

Most of the time, though, you’re simply watching the main story unfold as Frigg gets pulled from one distressed townsperson to the next. It’s an emotional two and half-odd hours, and the tensions of this remote community are handled with great care and sensitivity. They are, after all, based on real events, all of which Frigg can read in the mysterious bottles that appear on her desk every morning.

There’s even the odd bit of interview footage with the people behind these stories thrown in there as well, blurring the lines between fiction and reality. Indeed, there are occasional fourth-wall-breaking hints that Frigg is, in fact, inside a video game that crop up every now and again, bringing to mind glimmers of Daniel Mullins’ Pony Island and The Hex. Elk never goes completely meta like those games, but there’s definitely some shared DNA in there.

It probably goes without saying by now that Welcome To Elk isn’t a particularly ‘happy’ game, and I wouldn’t recommend playing it if you’re feeling in any way fragile right now. Approach it in the same way you would, say, a challenging piece of arthouse cinema, though, and there’s plenty to admire here.