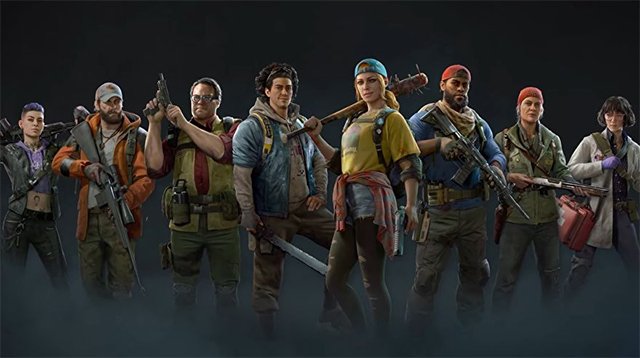 Multiplayer games are only as strong as their audience. And there are multiple aspects that can affect how big that audience is: release date, price, platforms, and quality are just a few of those variables. Back 4 Blood, Turtle Rock Studios’ upcoming cooperative shooter, seems to be going out of its way to make sure it has hordes of players to combat its hordes of zombies Ridden. And, much like a fortified building or sports arena that’s in just about every piece of zombie fiction, Turtle Rock is trying to defend itself from all sides against the scourge that is a low player count.

Like a lot of recent games, Back 4 Blood is launching on Game Pass. But unlike a lot of those games, Back 4 Blood is a full $60 title that’s launching on Game Pass; something that AAA games outside of Microsoft’s internal studios don’t often see. That automatically puts it in front of at least 25 to 30 million people (if recent rumblings surrounding Game Pass’ subscriber numbers are accurate) for no up-front cost. Chris Ashton, Turtle Rock design director and studio co-founder, said that this deal is “awesome because it removes the barrier,” which will help the game grab players it might not normally grab.

“If it is not something you would normally play, but it seems like a social thing and you’re more of a social player, but it doesn’t really cost you anything to try it out, you go in, right?” Ashton said. “So we will hopefully get those players and reach out to a wider audience than we would have otherwise. I think it’s going to be really good for the game. It’s good for us to have both [kinds of players]. As a studio, we are excited about the prospects.”

Ashton recalled a time during the beta where he matched with a group of three people who were all friends. They only played rhythm games, but found the free beta. It wasn’t long until they started making plans around launch to continue playing together. Since the beta also had very few barriers in front of it, Ashton said that Game Pass would offer a similarly low-stakes way to try the game out.

Normally a multiplayer game on Game Pass would only benefit Xbox or PC owners, but Game Pass helps out every platform since it has full crossplay functionality. Gathering everyone together into one hopper keeps matchmaking times low, even for users on PlayStation who all have to pay the full ticket price. It’s one decision that has widespread implications and this result of having a centralized community wasn’t lost on Ashton.

“I think it’s pretty big for us,” Ashton said. “Part of it is that it’s a multiplayer game — it’s a co-op game and we have PvP — with a multiplayer game, your community is super critical. Our matchmaking times depend on having enough of a pool and because we’re crossplay as well, it means that really everybody who is on Game Pass will be able to match into games with people on other consoles and whatnot. So it does mean we will have a healthy player pool on day one. Fingers crossed.”

A Hardcore Focus on Casual Players The casual audience that is going to make up a big portion of that player pool needs to be catered to, as well. The team knew this going in and focused on developing a game that less hardcore users could dive deep into, which was quite difficult, according to Ashton, because it’s not something most players actively think about.

This mainly takes place within its progression system as most players, regardless of their skill level, love to have a bigger goal to work toward. But, as Ashton explained, that carrot on the stick inherently favors veterans as they have been playing longer and will therefore have better gear. This can make it hard for a team of Cleaners to squad up together unless they’ve sunk a similar amount of hours into the game.

“It’s sort of a complicated idea from the developer’s side,” Ashton admitted. “From the player’s perspective, it doesn’t matter. People might not even think about [the possible discrepancy between hours played in a party]. There’s no weird matchmaking. It’s just normal matchmaking. We join into a party, we play a game, and I have not as cool cards as you, but it all goes into the pool to help the team and we’re effective.” The upcoming downloadable content is similarly meant to facilitate everyone in its playerbase. The game does have a season pass, but as long as the party leader owns the DLC, everyone else in the party will be able to play that content, too. It’s unclear how this will all work out in practice since the DLC hasn’t come out yet and it’s yet to be seen what parts of the season pass this promise applies to, but it’s going to put more players in the same pool when it’s all said and done.

The accessibility settings even means more types of players are allowed in the pool. It has the usual gamut of colorblind and subtitle options, button remapping, text-to-speech, camera settings, captions, and more that already sit on top of its multiple difficulty modes. Back 4 Blood isn’t as accessible or customizable as The Last of Us Part II or most of Ubisoft’s recent games, but it’s a decent start that will open up the door for more people.

MORE: Far Cry 6 Review: A Solid Evolution, Not a Revolution

This is a stark contrast from Evolve, Turtle Rock’s last non-VR game (and the game in the screen shot below). Ex-Turtle Rock Producer Tara Voelker championed accessibility features for the multiplayer shooter, but it consisted of trying to patch these features in after launch, which she explained in her talk at GDC 2017. Voelker spoke about how it was a gradual process that required a lot of extra work since the team didn’t start with those options in mind. That lost time probably cost Evolve some players that it desperately needed and limited its potential outreach.

Evolving With the Times Evolve seemed to inspire Back 4 Blood in that it was an example of what not to do. The game’s DLC strategy was off-putting, crossplay didn’t exist yet, and Game Pass was merely a twinkle in Phil Spencer’s eye. Evolve eventually went free-to-play, but the damage was already done. Ashton, and presumably the rest of Turtle Rock, was aware of these fatal missteps and took them in stride.

“Life is a learning process,” Ashton said. “We’re all learning and trying to get better. With each game that we work on and release, there are some hard lessons there. Even during game development, we experiment and try stuff. And a lot of the stuff that we are excited about may fail and we’re OK with that and typically we learn from those failures and it makes us do it a better way the next time.”

Turtle Rock made four games after Evolve, all of which were exclusive to virtual reality. But this time away from more traditional games and healthy amount of self-examination meant the studio was primed to return to a genre it birthed with the capabilities to right its past wrongs.

“We built some other games in between and we’ve learned more. The games industry has changed. More people are online than ever. The platforms are more powerful. So it’s a mix of that and ‘What could we do if we did it again?’ And also it seems like the timing is good, especially right now.” Evolve also failed solo players. It was such a cooperatively focused title that anyone hopping in and playing as a hunter had to depend on random people for a successful hunt, which almost never works out in any game. Evolve’s classes were also strictly defined and required that everyone play their role.

Back 4 Blood, on the other hand, lays out its welcoming mat a little more cleanly for solo slayers. Its multiple difficulties mean lone wolves don’t necessarily have to communicate to get to the end and its customization lets users craft their own role over rigidly fitting into predetermined ones that require strict coordination. Co-op is still the best way to get everything out of Back 4 Blood and Ashton hopes that solo players will eventually try the multiplayer. Ultimately, Turtle Rock wants everyone to have more control over how they play and created a type of game that uses cooperation in some areas but doesn’t mandate it like Evolve; both of which benefit solo players.

“We just wanted to make sure that, no matter how you played and it didn’t matter how much time you put in, your playtime should be fun and rewarding and there’s always some sort of thing you’re working toward, whether it’s a gold Desert Eagle skin, a card in the caravan, or just trying to get to the end of the campaign on the highest difficulty,” said Ashton. “And you can work toward all that solo, as a quick matcher, or with your friends. You should be able to play the game however you want.”

But it appears that isn’t as straightforward as it sounds. Despite how there should “always [be] some sort of thing [players are] working toward,” playing completely alone with bots doesn’t unlock anything. Solo Cleaners can’t earn trophies, achievements, Supply Points, or cards (although all cards are unlocked). It’s oddly restrictive given Turtle Rock’s willingness to accommodate many types of players. The team said it is looking into it but hasn’t discussed what steps it will take.

However, it seems as though that is one of the few examples of Back 4 Blood working against its audience. The cooperative first-person shooter is taking cues from what has worked and not worked over the past generation and has wrapped it up in a Left 4 Dead-style package that people have been waiting for since 2009. It is yet to be seen if Back 4 Blood will prematurely rot away into the soil, but, unlike Evolve, it seems to have actually evolved with the times and might avoid such a fate.