How To Defeat Cessnya, The Iskal Queen In Remnant: From the Ashes 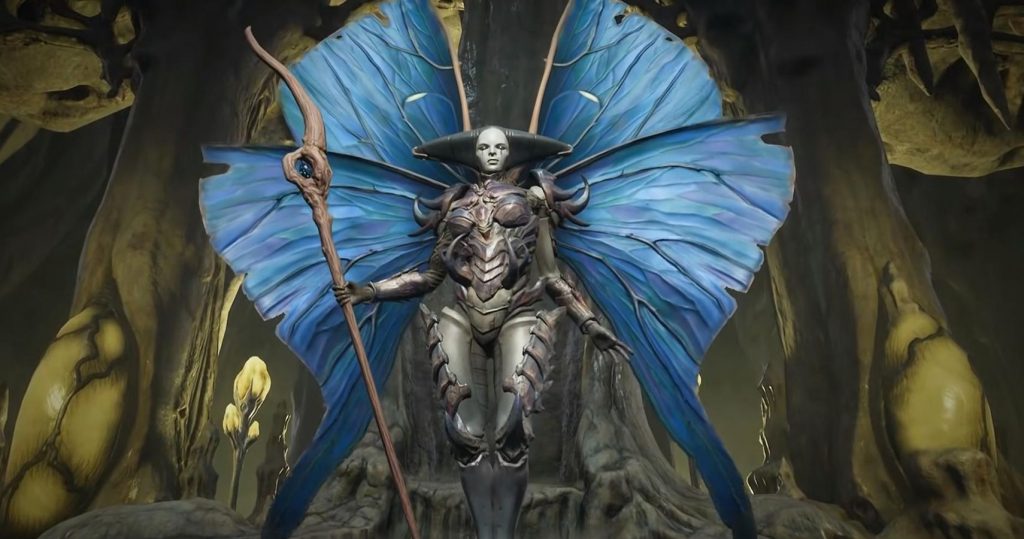 Remnant: From The Ashes has a lot of bosses, about 40 with both the DLCs. There are a wide variety of Dungeon Bosses, World Bosses, and Mini-Bosses you can counter in each Realm.

Unfortunately, Cessnya, The Iskal Queen of Corsus, was only an NPC Merchant in the base game. Instead of her being the World Boss for Corsus like the Undying King was for Rhom, you had to deal with Ixillis XV and Ixillis XVI instead. But thanks to the Swamps of Corsus DLC, we finally got to brawl with the Queen, one-on-one — and it’s a pretty tough battle! So tough, in fact, that a lot of players might need help. So here’s our breakdown of the fight and how to win against her.

Updated April 16th, 2021 by Jacob Buchalter: There’s been a big surge in Remnant: From the Ashes players, thanks to it being one of the PS+ games for March. And a lot of you who started playing it then have stuck around, bought the full game, and even the DLCs such as the Swamps of Corsus or Subject 2923. For those of you who have encountered the Iskal Queen boss fight in SoC, it makes sense now that Corsus is one of the harder Realms. Thankfully, we’re going to take another look, go more in-depth, and give you all the tips for how to fight the Iskal Queen.

Who Is The Iskal Queen? What Are Her Plans For Corsus?

So, what does this Insect Monarch have to do with the story of Remnant? Well, quite frankly, not all too much. Corsus is a Realm that can be skipped altogether if you so choose. But the lore behind what happened to Corsus’ original inhabitants, the elves, and what she plans to do against the Root, is pretty interesting. Basically, the Iskal Queen asks you to get the Guardian’s Heart so that she can let the Root invade Corsus in an attempt to assimilate them into the Iskal Hivemind as if that would make any sense.

What Are The Possible Rewards From This Battle?

Like all Bosses in Remnant, what Materials drop after the Iskal Queen fight? There are a few rewards you can get from her outside of the fight, but in terms of materials she specifically drops, there are only two. These are the Crystalline Plasma and the Iskal Husk, which are used to craft:

How Do I Trigger Her Alternate Kill?

Usually, for Alternate Kills in Remnant, you just have to interact with a certain object or kill a boss in a specific way. Sometimes this means the boss battle changes a bit, while other times it changes almost nothing. But, the Iskal Queen is likely the only fight in the game where her Alternate Kill removes over half of the fight entirely.

To pull this off, you’ve got to shoot the Iskal Queen in the head during the transition sequence from phase 1 to phase 2 (we’ll talk about that transition below), causing enough damage for her to stagger. But, you have to make sure she staggers directly underneath one of the stalactites above (use the puddles on the ground for reference), and then shoot the stalactites so it falls on her before she recovers.

General Tips & What To Bring

Cessnya likely has more attacks at her disposal than any other boss in the game, so beating her requires some real dedication, knowledge of certain tricks, and practice. That said, there are a lot of Weapon Mods and items that make a huge difference, so let’s cover those real quick.

Now, let’s talk about the potential attacks she can use against you.

Let’s start covering the different attacks and abilities the Iskal Queen will use in her first phase. For the entirety of this initial phase, she won’t actually move from in front of her throne, so as long as you learn the animations for when she’s about to attack, it should be easy to lay into her head, which is her weak spot.

This is always the first move Cessnya starts with, where she summons a bunch of Corrosive Beetles that crawl full speed in order to jump up and explode on you. It can be a bit overwhelming at first, but once you learn the pattern, they become pretty easy to handle. There are several ways to counteract this onslaught, such as:

Just be careful of the glowing ones, these scoundrels move faster than the rest, so focus on them first.

For this next attack, the Iskal Queen raises her staff slightly and it’ll glow brightly with light, then, a flurry of Corrosive Mortars will blast upward (three, to be precise) and land at your current location. All it takes is some sprinting or a few rolls to avoid this, luckily. Careful though, these projectiles will leave some Corrosive goo behind that does decent damage while afflicting you with the Corroded Status Ailment.

This one’s a bit tough to get used to at first. Basically, you’ll see a swarm of insects forming on your shoulder, which will (somehow) combine into the shape of one of her beetles that you’ll be able to clearly see on your arm/shoulder. Then, after a short period of time, the Iskal Queen will snap, and the beetle explodes almost instantly. Dodge when you hear the snap, and you should be fine.

There are two Corrosive Fields or AoEs the Queen likes to use in this first phase, both of which do insane damage if you’re caught standing in them and will almost assuredly inflict you with Corroded. The two variations are:

After losing about 25% of her health, the Iskal Queen’s armor will shatter, she’ll scream, let out a shock wave of sorts, and summon some sort of mist into the arena. This mist will cause you to cough and severely limit your movement, essentially requiring you to focus solely on shooting Cessnya as she descends from her throne and slowly walks toward you.

Focus on her head, because this transition is actually a DPS race, and if Cessnya reaches you, it’s game over. So, whatever burst damage you have, make sure it’s up and ready right around the time you’ve drained one and a half of her segmented health bars.

Phase 2: From Ranged To Melee

Once you’ve made it past the transitional phase, the Iskal Queen enters phase 2, and this is where she focuses on getting up close and personal, going from casting spells with a staff to slashing with a scythe.

The Iskal Queen’s bread and butter attack in her melee form is her three-string combo. Each part of the string has a specific animation tell. For the first swing, she does a backspin to build up momentum, the second, vertical spin move has her reel the scythe back in order to throw it forward, and the last attack has her jumping toward you. It can be a bit tricky getting used to this, as the Iskal Queen sometimes only does one slash, or even a feinting an attack to throw you off.

Most of the AoE attacks in Remnant have a long windup and are pretty easy to dodge, but not this one. The only warning you get for this one is her low crouch before she leaps into the air and slams her scythe into the ground. You can’t really run away from this one, rather, you’ve got to dodge right as the scythe hits the ground, because the AoE effect is instant.

This works the same as in her first phase, where her staff, which is now a scythe, will glow bright white before she slams it into the ground, creating a field of Corrosive energy in a straight line toward you. Make sure to fully roll to the side for this one, as the aura it leaves behind is wider than it initially appears.

This next attack works functionally the same as Link’s Sword Beams from any Zelda game, Vergils Judgement Cut from Devil May Cry games, or the Moonlight Greatsword beam attack in From Software titles. The Iskal Queen will swing her scythe as if she’s attacking you, but she’ll be pretty far away, and this is how you’ll know that the projectiles are coming. Their projectile speed is a bit tricky, so try and dodge them usually visual cues more than muscle memory.

And finally, the last attack Cessnya has in her Phase 2 repertoire, the Quick-Draw. This is obviously meant to be a play on the Iaido or Quick Draw techniques you see in Eastern media since Cessnya even holds the scythe at her hip like you would with a katana. She usually only uses it after backing up or while at mid-range, so if you stay close it’s unlikely that she’ll whip this move out. But if the Iskal Queen does use it, you might get tripped up by the timing. Then, following the katana “Iaido” theme, she’ll dash forward at high speed, cutting right through you. Again, as long as you roll right as you see movement, you’ll likely be fine.

At about 30% health, Cessnya twirls into the air and starts fighting from the skies. Now, this phase doesn’t change the fight tactics all too much, at least not as much as it did from phase 1 to 2. There are a couple of new moves to look out for, but the methodology is mostly the same.

The primary change for fighting the Iskal Queen while she flies is getting used to her new long-reaching moves, and the uppercut is a perfect example. Instead of the bright white glow you’re used to, this attack has a more subtle, bluish glow. As soon as you see that, get ready to roll, as the Iskal Queen starts to position her scythe in an “uppercut” position. Watch the movement of the scythe, and dodge right when it looks like it would hit you if she was in melee range because a thin line of Corrosive energy will follow the scythes path and almost assuredly reach you.

Same as the Ground beams, but this time in the air! She usually shoots two in a row, and they might take a bit longer to reach you. Thankfully, the tracking isn’t as tight as when she used them on the ground, so you can easily roll once then walk to either side to dodge both of them.

Finally, her last potential attack, the Scythe Toss into Power Bomb. The animation for this move is very similar to the scythe uppercut, though this one has a longer wind-up and she raises it above her head instead of below. After charging this move, the Iskal Queen will then chuck her scythe right at you at mach speed, which will release a small AoE shockwave once it hits the ground.

Rolling right as she lets go seems to do the trick, but you might want to roll a couple of times, because the Iskal Queen then launches herself, at an equally shocking speed, right to where her scythe is. The AoE from this is 2-3 times as large as the initial one, so it can be a bit tricky to avoid.

Next: 10 Things About Remnant: From The Ashes That Make It Best Played Through Co-Op