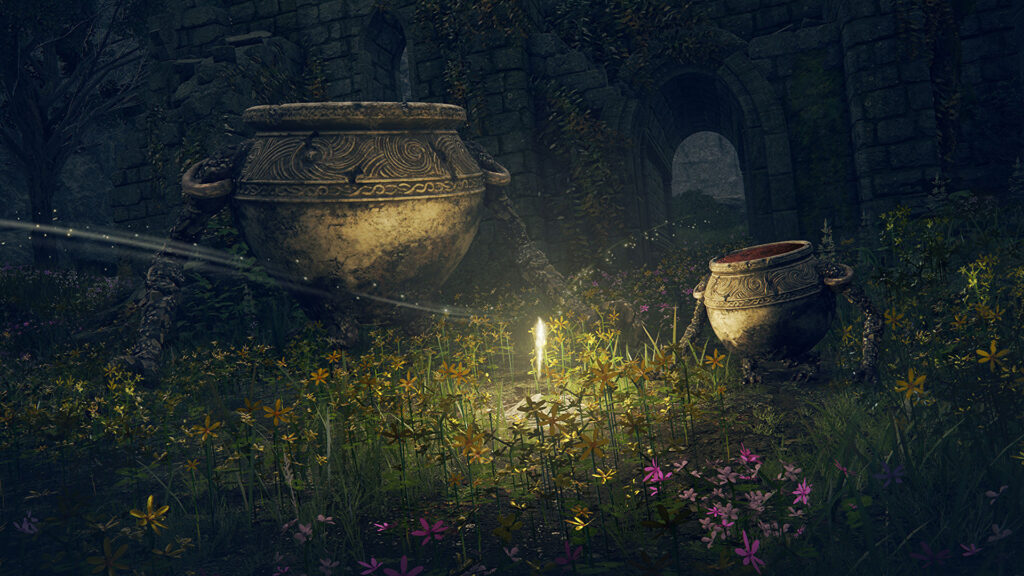 The long-awaited first Elden Ring gameplay trailer arrived last night, along with a release date. It looks incredibly Dark Souls, and I am stoked. But between the landscapes of ruins and mournful monsters, I saw perhaps my favourite new monsters: ambulant urns, limbed pots – the vaseboys. I know nothing about them yet I adore them. They seem a delightful escalation of FromSoftware trying to use your knowledge of their games and fantasy tropes against you.

First, go on then, let’s have the whole trailer again. I already watched it twice this morning.

The urns only make a wee appearance there, but the first Elden Ring screenshots soon gave us a clearer look. They are great. I adore them. I am so happy that they come in multiple sizes too. I hope they’re like the Dark Souls mushrooms, with one size sweet and the other straight murderous. Look how adorable it is when the wee one tries to turn on its diddy feet, like a marble penguin with comically long arms:

They’re cute and all, but I also dig the idea that they may be another example of Souls using our knowledge and trained behaviours against us. While From didn’t invent Mimics, their take on a monster which pretends to be a treasure chest to devour greedy adventurers sure put me on my back foot. I also quite like Dark Souls 2’s red crystal lizards, which appear to be the same sort of elusive critter that we chase down and batter to get minerals – but these explode when you get near. It’s a trick which only gets you once, but it’s a great trick. And urns? If you see an urn, pot, vase, or other vessel in a Souls game, of course you’re going to try to roll through it. It might contain treasure and even if not, it’ll smash real good.

Dark Souls 2 did also have trick urns, filled with poison or acid because Dark Souls 2 is a real dick of a game. Those were not charming. Those were annoying. But give an urn diddy feet and let it punch me? That is a charming hazard I will defend till my undying breath. It’s a simple design trick, and a great one.

This is all me assuming what the urns are and how they’ll work, of course. I could be completely wrong. But right now the idea is bringing me a great deal of satisfaction. As is the fan art.

I just had to draw the cute walking pot bois from the #ELDENRING trailer :’> pic.twitter.com/1TWI6Nkj5F


The game does have loads of cracking monster designs. I know Katharine is a fan of the giant tortoise with a clanging great bell dangling from its belly. Who caught your eye, gang?

Elden Ring is due to launch January 21st, 2022. As well coming to PC via Steam, it’ll be on PlayStations and Xboxes.