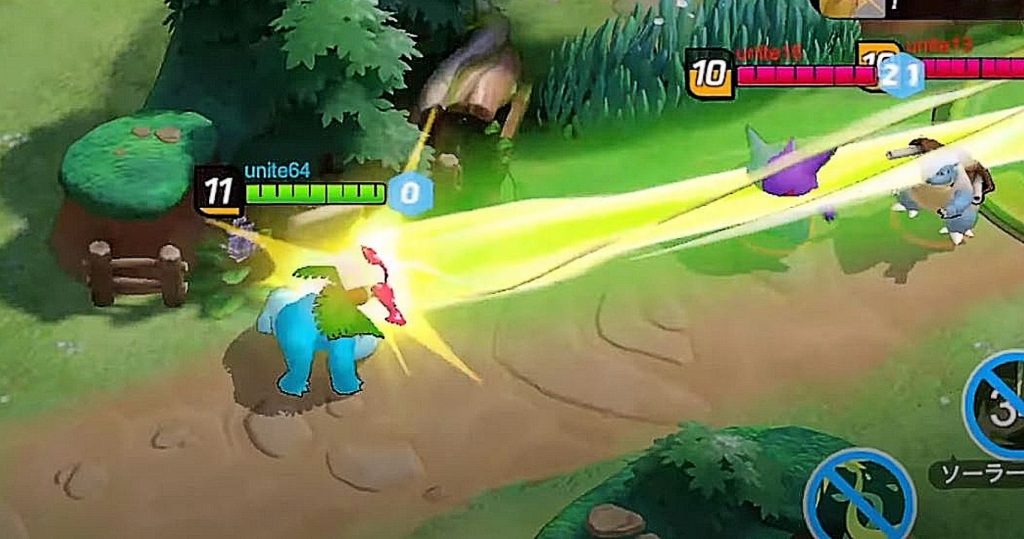 Unlike some of you, I am ridiculously excited for Pokemon Unite.

When The Pokemon Company first unveiled Pokemon Unite, longtime fans of the series were a bit confused. I reckon people were expecting Gen 9 news, which definitely wasn’t going to happen at the time, or confirmation that Diamond & Pearl remakes were in development, which we’ve since received. As a result, Unite was a bit of a polarizing subject in the community and still very much is to this day. But do you know what? I reckon Pokemon Unite is going to be brilliant – here’s why.

On top of the fact that Unite came straight out of leftfield, people were put off by the idea that it’s quite literally a Pokemon MOBA – imagine League of Legends except your jungler is a Gengar. I understand that this might seem like a bit of a weird mix, especially given how vocal Pokemon fans are about what they want, and how this is something that maybe one (1) person on the planet entertained the idea of for ten seconds back in 2005. But I reiterate: I think this is a fantastic concept and I honestly can’t wait to get my hands on it.

Related: No Matter How Big Pokemon Legends Arceus Is, Its Success Lies In Smallness

I feel like I should explain that I’m not a big MOBA fan. I played League of Legends for about an hour a few years back and found it completely impenetrable. Although Riot is expanding its IP into other mediums now, it’s pretty much impossible to know even a tenth of League’s enormous roster without actively being involved in the scene. How do I choose a main when there are, like, a gazillion champions to pick from? Part of me wishes I got into it back in 2009, although unfortunately I was only a young ‘un when League came out and was busy – you guessed it! – still playing Pokemon.

So yeah, this is a game and genre I’m actively fascinated by but have next to no entry point for. That’s where Unite comes in – if you gave me ten beers and said “name as many of the 898 Pokemon as you can in an hour,” I’m positive I could hit at least 600. If you asked me to describe their ideal skill sets, I’d explain that Alakazam is super speedy and packs a psychic punch, but a light breeze could knock it over. Slaking and Snorlax are slow and lethargic, but they’ll soak up hits like a tissue to a raindrop before returning said hits with the force of a thousand suns. Clefable puts up defensive walls, Chansey heals its teammates, Scizor balances invisibly quick attacks with stalwart, steeled defense – each and every one of these Pokemon has their own specialty that’s similar enough to several other ‘mons, but sufficiently distinct to form a niche. If you put a roster of 150 in front of me, you’d better believe I’d have a fair idea about what my job was without even needing to know about roles, or strategies, or whatever other cerebral stuff goes on in something as busy as a MOBA match.

That’s why this is such a huge opportunity, not just for League of Legends, but for an entire genre. Pokemon is so ubiquitous that it has the ability to bridge the gap separating this immensely niche kind of game from the mainstream. Yes, I recognize how many players regularly sign into League and know that it earned almost $2 billion in revenue last year, but if you ask Tom, Dick, or Larry down the pub to name a champion, how do you reckon they’ll get on? They’ll know Pikachu. Charizard, Squirtle, Bulbasaur, Gengar, Eevee – they might even know Mimikyu and Greninja. Pokemon is the biggest entertainment franchise that’s ever existed, and when I say franchise, I mean it – it’s got games, cards, movies, anime, t shirts, schoolbags, lunchboxes, sticker books, Advent calendars, McDonald’s Happy Meals – hell, there are even real-life Pokemon Centres.

I firmly believe that Pokemon Unite is going to be great. The premise suits the universe especially well given how vast and varied the mystical creatures inhabiting it are, but it’s also an intriguing direction for the series to go in. I’m always excited for spin-off games – I’m as big a mainline fan as anyone, but I reckon Mystery Dungeon, Let’s Go, Colosseum, and loads more besides had far more innovative ideas than like, Gen 6 or something. Pokemon has always used its more experimental entries to inform its core games, and I’m very curious to see what comes of Pokemon Unite – what could it possibly be practice for? Economy management? New co-op endeavors? Nothing at all? Let’s be real, in this instance it’s probably nothing at all, but still – it’s fascinating to think about how such a leftfield idea got the green light at all. The Pokemon Company runs a tight ship and it’s very unlikely it decided to thumbs up a flop. We’ll have to wait and see, but I’m sure as hell excited for what I reckon is going to be an amazing new Pokemon experience.

Next: Disco Elysium’s Understated Ending Is The Point

Nier Replicant: Where To Get Lizard Tails