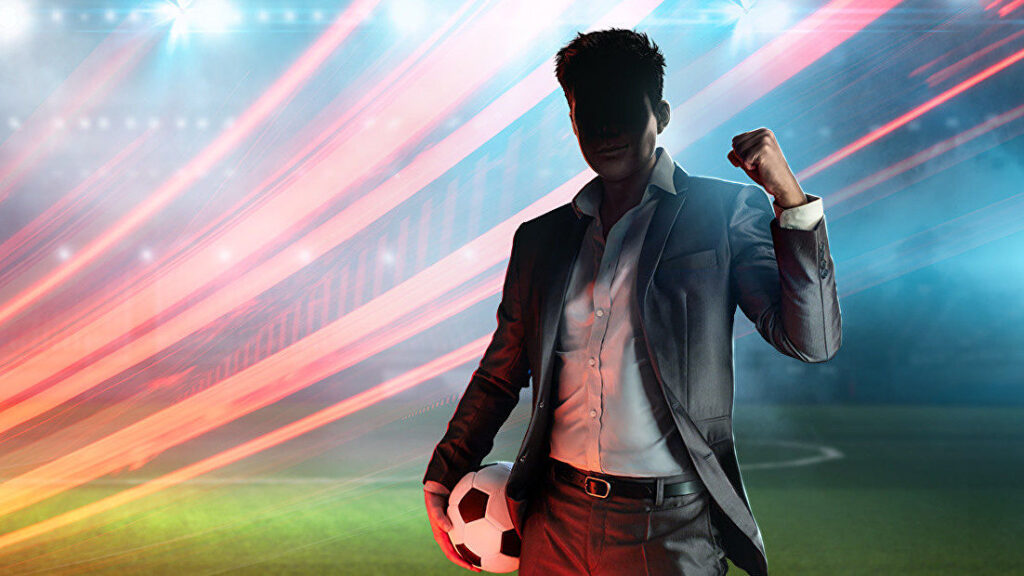 THQ Nordic, an arm of the monolithic and ever-hungry Embracer Group, today released new footie manager sim We Are Football – and I spy a very familiar absence-of-face on the box. The cover shows a fella in a suit pumping his fist, while his face is shrouded in shadow. I’ve seen this pose before. Could this be what happened to Football Manager’s mascot after he was fired? Have Embracer Group acquired even Manager Man now? Where does it end?

We Are Football is another strat-o-sim about managing a team through the highs and lows. Train, trade, look at graphs, all that. It’s got women’s football too, which is nice. While it doesn’t have official licenses, it does have an editor so I imagine players will soon create the real stuff. In the meantime, I am delighted to see the team emblems in marketing screenshots.

Yeah, I think Newcastle actually should replace the sea-horses in their crest with a helicopter. Maybe it’s a sick burn on the state of the modern Premier League: so awash with money that players travel by helicopter instead of tour bus, and the only people who can afford tickets are distant fans who come to games by air. No care for local fans anymore, the European Super League showed.

But what I really want to know is: is this our Manager Man on the box art? Have Embracer acquired our fictional boy? They’re certainly buying everyone else.

I feel for Manager Man. We’ve followed his highs and lows, between his knees and nose, on the Football Manager box art for years. It’s gutting that his final appearance showed him at a high before Sega unceremoniously fired him. Still, our boy’s got gumption. It would be classic Manager Man for him to slum it in a lower division for a few years before rising again. He loves the game too much to quit. Good on you, Manager Man. I wish you the best of luck with We Are Football. You’re always fighting for your team, and I’m always rooting for you. You’re right to pump that fist.

We Are Football is out now on Steam, with a 10% launch discount bringing it down to £27/€32/$32 for the next week. It’s made by Winning Streak Games and published by THQ Nordic. Winning Streak were co-founded by Gerald Köhler, who was a key designer on EA’s Fifa Manager games for years, and worked on the Total Club Manager and On The Ball games before that.