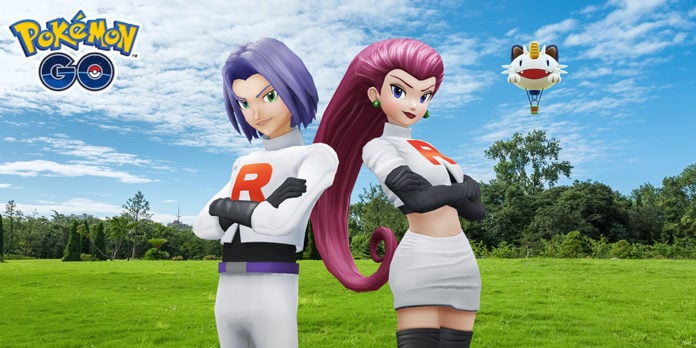 Trainers, Jessie and James can now be encountered via their Meowth-shaped balloon! This announcement was teased lightly by some Team Go Rocket grunt dialogue, but the sudden announcement/release has still taken many trainers by surprise. They won’t stick around, so battle them while you can!

Defeating Jessie and James is required to complete the Shiny Celebi Special Research.

Jessie and James have the following Pokémon in their lineup:

You fight Jessie and James back to back, but you have an opportunity to heal during these fights. If victorious, you will receive 500 Stardust and a Rocket Radar component for each victory.

Jessie’s Scyther and James’ Pinsir can be shiny.

Defeating Jessie and James is quite easy, since both of them use easily countered unevolved forms of Pokémon.

Use the following Pokémon to defeat Jessie:

Use the following Pokémon to defeat James:

How to get Jessie and James in Pokémon GO

The balloon has a roughly 50% chance to spawn over the regular GO Rocket balloon. For more details, check out our GO Rocket Balloons Guide: Spawn rates, Encounters, Jessie and James.

If you have Rocket Radar equipped, you will still encounter Jessie and James from the Meowth Balloon.

It’s pretty cool to see the iconic Rocket duo in Pokémon GO (even if their artstyle clashes a little). Although they’re only temporary, it’s still gonna be fun to battle them, and they’re bound to return for another Team Rocket based event! Good luck, trainers!