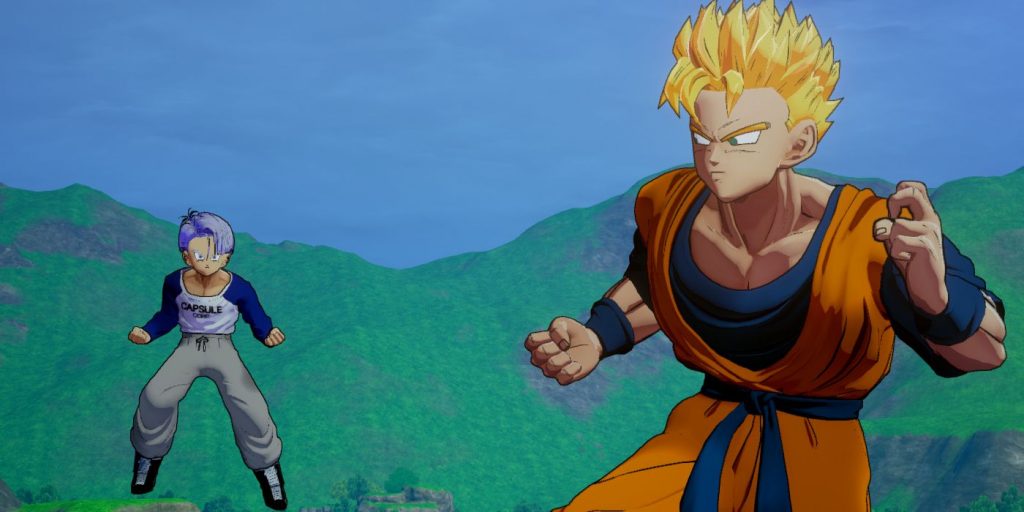 A set of four screenshots released on Twitter has finally revealed more information about Dragon Ball Z: Kakarot‘s long-awaited third DLC, which will see players relive the events of the anime special Dragon Ball Z: The History of Trunks. Confirmed as the final DLC for DBZ Kakarot, fans of the game are eager to learn more about how the DLC will play, given that, just like the anime special, the story will take place in a different timeline from the main game.

FEATURED: Dragon Ball Z: Kakarot is Not Coming to the Nintendo Switch

The four new screenshots were shared by Ken Xyro on Twitter and revealed more about how the DLC will play. The first picture shows Future Trunks supporting Future Gohan, whose inclusion in the DLC was also revealed by Ken Xyro. The next image shows a combination assault from Android 17 and 18, which ties in with the following image showing small drones scanning Trunks. According to the tweet, if the player fails to destroy the drones in time, both androids will chase them down. The final image shows Trunks meeting with Master Roshi, Turtle, Oolong, and Puar in their submarine hideout, though what they help the player with is not yet known.

The flying drones will survey the area, if you fail to destroy them in time, they’ll sound an alarm which will call upon Android 17 and 18 to fight against you. pic.twitter.com/k9vtpTO6PX

Fighting off the drones while avoiding direct confrontation with the androids perfectly captures the depressive future that Future Trunk and Gohan survive in and will make players feel hunted. In this timeline where Goku is dead, which continues on Dragon Ball Z: Kakarot‘s most ironic problems, the characters are not powerful warriors but the last vestige of hope fighting for survival. While fans still have no idea about how long the DLC will be or how much it will cover, fans expect it to be more substantive than both DLC 1 and 2.

Dragon Ball Z: Kakarot‘s DLC has been hit-and-miss with fans. DLC 1 only featured Boss Battles with Whis and Berus, and fans were left wanting more, while DLC 2 retold the events of Dragon Ball Z: Ressurection F and added a little more to do outside of battle. The developers even added a card battle game that could have been its own stand-alone game. Whether the final DLC will satisfy fans or leave them wanting more is hard to tell, but so far, the DLC looks promising.

Dragon Ball Z: Kakarot is available now on PC, PlayStation 4, and Xbox One.

MORE: Dragon Ball Z: Kakarot – How to Prepare For DLC 3

Since I started walking, I played video games, though I wasn’t any good at them back then, obviously. I have played and owned every console since the SNES and play a wide variety of games. I have a particular fondness for JRPG’s and tactical games.