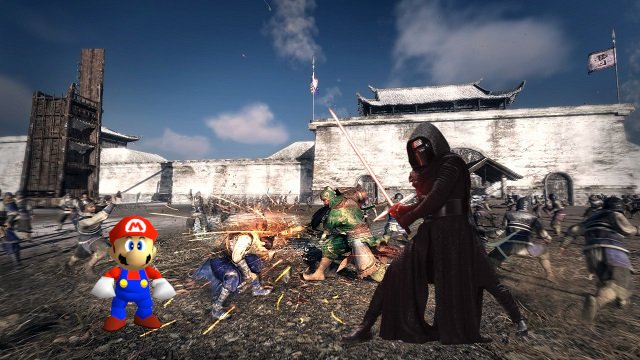 In an interview with TheGamer released this week, Koei Tecmo Games President Hisashi Koinuma named the Super Mario and Star Wars franchises for his list of dream Musou games in the future.

For those not in the known, Musou is the genre name for games that play like Dynasty Warriors. They typically feature 1000s of enemy soldiers that fall with a single swing of a sword and a few harder opponents attempting to take over zones across a battlefield.

Koei Tecmo makes the vast majority of entries in the genre across multiple different original franchises and spin-offs featuring everything from Gundam to The Legend of Zelda. However, even though there is a preexisting relationship with Nintendo over several different projects, Koinuma states that the opportunity to work with the most famous plumber in gaming hasn’t been on the table.

Star Wars might be the easier get for Koei Tecmo at the moment. Disney seems keen to work with multiple publishers in the wake of a lengthy exclusive relationship with Electronic Arts. With games coming from Ubisoft, EA, and smaller studios in the coming years, the team at Lucasfilm might be receptive to an action-heavy take on lightsaber combat.

RELATED: Star Wars Celebration Anaheim Moves Up to May in 2022

Hisashi Koinuma expanded on much in the full interview, including details about the next Musou game from the publisher, Samurai Warriors 5. That game is hitting stores soon on PlayStation 5 and Nintendo Switch, but those looking for a new battlefield to conquer right now could check out the recently released Persona 5: Strikers and Hyrule Warriors: Age of Calamity, among many others.