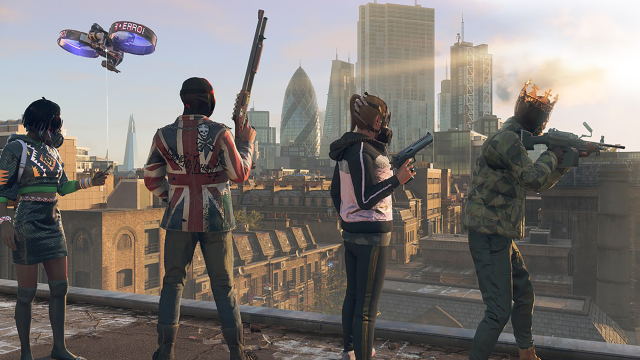 Just when you thought the newest Watch Dogs entry couldn’t get any weirder, Ubisoft brought zombies to its version of London. The Watch Dogs: Legion of the Dead DLC will be available to players starting tomorrow, on June 1, 2021.

According to IGN, Watch Dog: Legion‘s zombie DLC will be part of title update 4.5. Rather than the single-player experience that the game is known for, Legion of the Dead will pin four players against the undead in a PvE rogue-lite. The 22 minutes of footage shown features characters using the wild and wacky gadgets and gizmos found in the base game, but using them against the zombie horde.

In an interview with IGN, Watch Dogs: Legion online director Jean-Pascal Cambiotti discussed the team’s inspiration for their interpretation of one of the horror genre’s greatest threats.

“I think there’s something inherently fun about playing with zombies, beyond the instant gratification of destroying them,” says Cambiotti. “We were inspired by the multiple portrayals of zombies across popular culture, and in the game, we made the decision to make zombies slower but lethal. They can be used as a gameplay tool to create chaos by luring them into fortified Albion layouts while you sneak in and save your precious ammo for another fight.

Cambiotti also talked about the design strategy behind the Watch Dogs: Legion of the Dead DLC. Essentially, the team wanted to use the existing systems already available in the game and do something a bit unconventional. Ubisoft will also be listening to player feedback to see what direction the audience wants to see the mode go.

“The design strategy on Watch Dogs: Legion of the Dead was to expand on existing systems and flip them on its head – like creating a rogue-lite approach with Watch Dogs: Legion’s unique gadgets,” says Cambiotti. “We want to keep an open line of communication with the community and see where they want to take the game mode next.”

Cambiotti also mentioned that the team will be “starting small” with the Watch Dogs: Legion of the Dead DLC and will provide frequent updates for the game based on feedback.