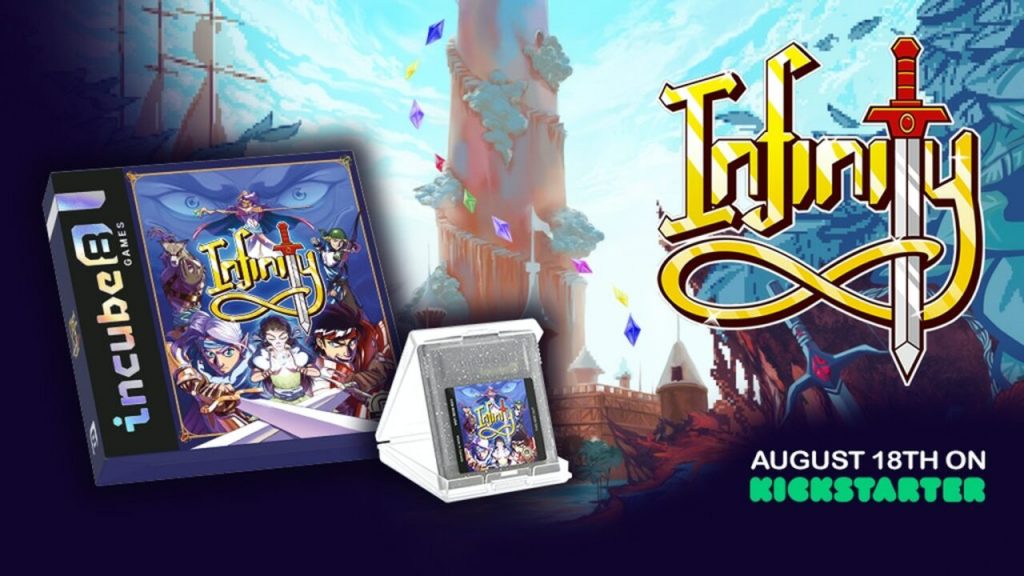 Update #2: Infinity has hit all of its crowdfunding targets and will now be getting a special ‘GBA enhanced’ mode.

Here’s what the developers had to say:

With all stretch goals achieved, several in-game still artworks will be added and the game will be GBA Enhanced.

This Enhanced mode is a feature where inserted in a Game Boy Advance, the game allows you to access more content.

The “GBA Enhanced” mode has only been used by 4 games on GBC so it will make Infinity part of those rare games with a GBA Enhanced mode!

Update #1 [Sat 28th Aug, 2021 09:10 BST]: The crowdfunding campaign stands at almost £140,000 at the time of writing, which means that legendary composer Yuzo Koshiro (Streets of Rage, Etrian Odyssey) will now be contributing music to the game – his first ever work on the Game Boy!

The stretch goal of $100,000CAD has been surpassed in a few hours, creating the Gameboy music natively “for the first time in my life” will be achieved. Thanks for your back.😀https://t.co/XKErnk3tBl— Yuzo Koshiro (@yuzokoshiro) August 19, 2021

The GBC project was originally developed by Affinix Software between 1999 and 2001 but unfortunately got axed due to publishing struggles and the launch of the Game Boy Advance.

An unfinished ROM appeared five years ago, alongside a soundtrack release, and now the game is getting a second shot on Kickstarter. In the latest update, indie publishers Incube8 Games and Retro Modding have confirmed the Kickstarter for the tactical RPG will launch next week on 18th August. The game will be available in physical and digital form.

Here’s a bit about it, along with a look:

In Infinity, an ancient, nameless evil stirs beneath the earth, twisting the land and its people alike with its corrupting force. Two rival nations careen toward war, as shadowy figure arms them both with unholy weapons of immense power.

This epic tale frames a roleplaying game with a unique tactical battle system, a detailed world with over 50 explorable areas and more than 100 items, and beautiful 8-bit graphics — all to immerse you into the world of Infinity!

Infinity has been left incomplete for 20 years and this Kickstarter campaign will help complete and produce a physical cartridge release for the Game Boy Color.

And here are some of the features: